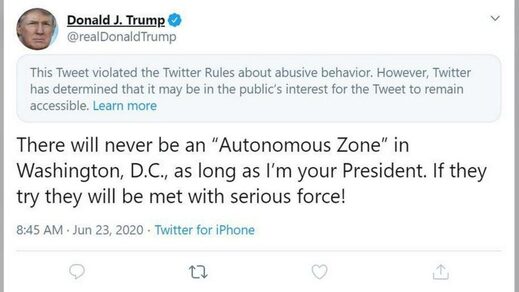 Twitter has censored another post by President Donald Trump, claiming his warning against creating an ‘autonomous zone’ outside the White House amounted to a “threat of harm” and violated their policy against abusive behavior.

“There will never be an ‘Autonomous Zone’ in Washington, DC, as long as I’m your President. If they try they will be met with serious force!” Trump tweeted on Tuesday, after a large crowd of masked protesters tried setting up barricades in Lafayette Park.

Graffiti declared the set-up to be the ‘Black House Autonomous Zone,’ a take on the infamous CHAZ/CHOP experiment in Seattle, on the other side of the country.

According to Twitter, however, Trump’s post violated the rules about “abusive behavior” due to the “presence of a threat of harm against an identifiable group.”

As a result, the president’s tweet was hidden behind a public notice, requiring users to confirm they wish to see it. The notice also disables liking or retweeting.

We’ve placed a public interest notice on this Tweet for violating our policy against abusive behavior, specifically, the presence of a threat of harm against an identifiable group.https://t.co/AcmW6O6d4t

This is the second time Twitter has done this with Trump’s posts. On May 29, they censored his tweet about the riots in Minnesota, saying the post was “glorifying violence.”

“Twitter claims statements by public officials in support of enforcement of rule of law against violent mobs violate its policies,” the Federalist editor Mollie Hemingway said about the censorship.

Journalist Michael Tracey described Twitter’s standard as “even more ridiculously incoherent” than the previous one.

Now Trump’s tweets are being censored on the ground that they constitute “abusive behavior”? (Whatever the hell that means.) Twitter replaced their previous standard for presidential tweet censorship, “glorifying violence,” with an even more ridiculously incoherent one pic.twitter.com/TEOhONUoXt

What began as peaceful protests over the police killing of Minneapolis resident George Floyd last month quickly turned violent and resulted in the looting and destruction of a police precinct and the surrounding block. Riots then spread to the neighboring St. Paul and then other cities across the US, including Washington, DC.

In addition to censoring Trump’s tweets aimed against the rioters, Twitter has also bowed to pressure from mainstream media outlets and deleted videos from several memes shared by the president, including one mocking CNN for fomenting racial hatred in America.

Twitter has also changed its logo from blue to black, and edited the description of the company’s official account to read “Black queer lives matter. Black trans lives matter. #BlackLivesMatter,” with its feed now consisting entirely of endorsements of the protests.