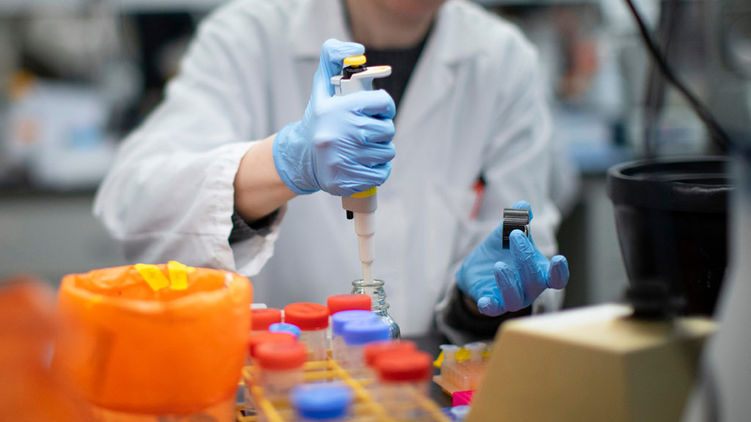 On April 23rd the US Embassy in Ukraine acknowledged that there are biological laboratories in Ukraine that are under the control of the Pentagon.

The statement of diplomats came after an open letter from people’s deputies about the threats posed by these research centers to Ukrainians.

However, the Americans deny the threats and say that scientific work is being carried out for exclusively peaceful purposes. And talk of threats is written off as “Russian disinformation”.

The Ukrainian “Strana” news agency looked into this story.

What the deputies of the Rada declared

In an appeal with reference to Serbian and Bulgarian media, it is reported that the US has more than 400 bacteriological laboratories around the world, including at least 15 in Ukraine.

There are exclusively American ones, and they are financed at the expense of the US Department of Defence. The laboratories are located in Odessa, Vinnytsia, Uzhgorod, Lvov (three), Kiev (three), Kherson, Ternopol, and near Crimea and Lugansk.

People’s deputies note that the functioning of American biolaboratories in Ukraine started during the presidency of Viktor Yushchenko and the premiership of Yuliya Tymoshenko – August 29th, 2005.

At that time, cooperation agreements were signed between the US Department of Defence and the Ministry of Healthcare of Ukraine for the prevention of proliferation technologies (growth of body tissue by cell division), pathogens, and expertise that can be used for the development of biological weapons.

“In fact, the work in the laboratories is carried out under the program of biological experiments. The budget is $2.1 billion and is funded by the US Defence Threat Reduction Agency. The Scientific and Technical Center in Ukraine, an international organisation funded by the American authorities and whose staff have diplomatic immunity, has also become involved in this activity. This organisation is engaged in financing projects for the creation of weapons of mass destruction,” wrote Medvedchuk and Kuzmin.

Further, the people’s deputies point out that after the launch of biolaboratories in Ukraine there were outbreaks of infectious diseases.

“So, in Ternopol in 2009 there was a virus that caused hemorrhagic pneumonia. Its victims were 450 Ukrainians. In 2011, there was an outbreak of cholera in Ukraine – 33 people died. Three years later, cholera was diagnosed already 800 citizens, another year later more than 100 cases of cholera were recorded in Nikolaev.”

People’s deputies also gave such examples. In January 2016, 20 soldiers died from an influenza-like virus in Kharkov, and more than 200 were hospitalised. Two months later, 364 deaths were recorded in Ukraine. “The reason is swine flu of the same strain of influenza that led to the global pandemic in 2009,” say Medvedchuk and Kuzmin.

They further point out that in 2017 in Nikolaev there was an outbreak of hepatitis A. In the summer of the same year there were similar hotbeds of infection in Zaporozhye and Odessa, and in the autumn – in Kharkov.

“In 2010-2012 [i.e., already under Yanukovych – ed] the Ukrainian government initiated checks to see if the laboratories comply with all safety measures. As a result, a number of gross disorders were identified that could lead to the leakage of strains of dangerous infections. The fact of extract ventilation facing the premises of a kindergarten was even recorded,” it is said in the appeal of Medvedchuk and Kuzmin.

Then people’s deputies write that in 2013 President Viktor Yanukovych abandoned such cooperation with the United States. But already in 2014 Petro Poroshenko continued it. “It is likely that Yanukovych lost power with the active participation of the US government precisely because of his refusal to cooperate with the Pentagon,” suggest the deputies from “Opposition Platform – For Life”.

In conclusion, they point out, “It is possible that the secret and opaque activities of dangerous foreign objects on the territory of Ukraine have the task of testing the actions of viruses and bacteria on the bodies of Ukrainians”, and ask the leadership of Ukraine to understand this. 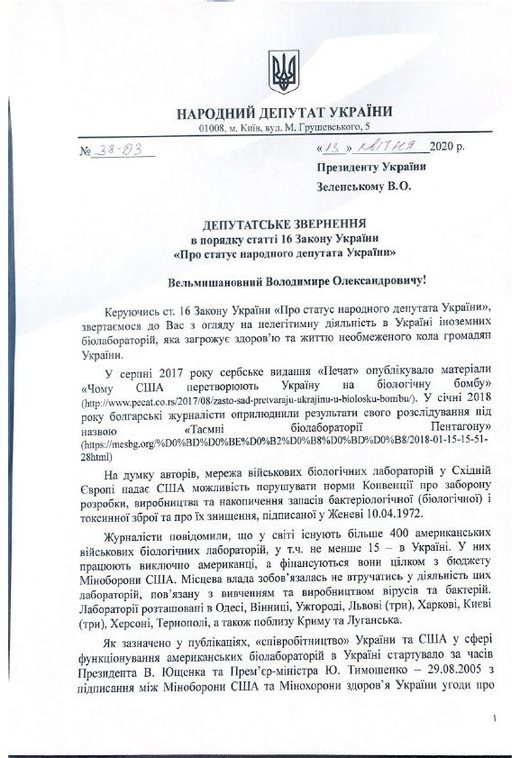 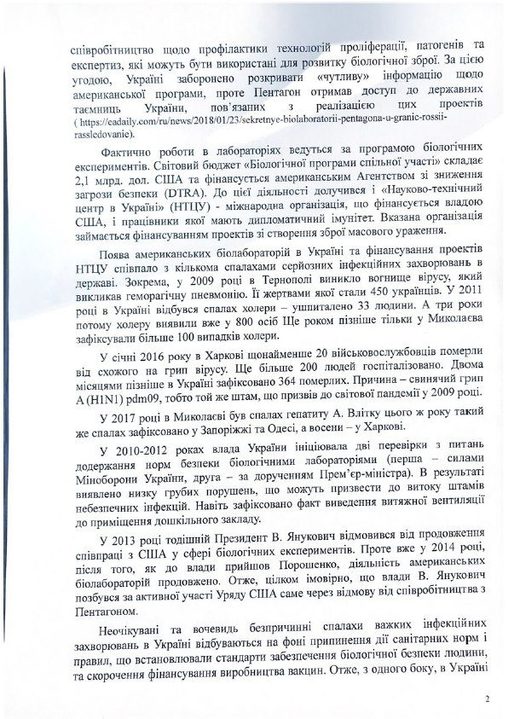 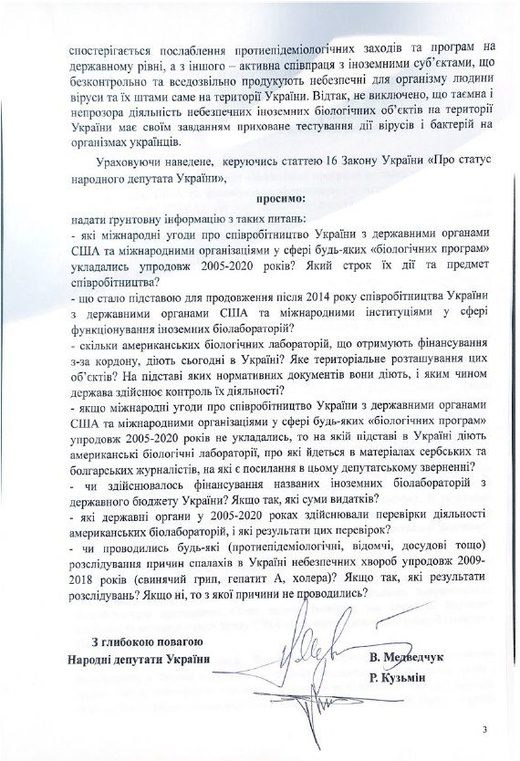 The topic of US biological laboratories in Ukraine is not new, and Kuzmin has been conducting it directly for a number of years.

“It is known that the Geneva Convention of 1972 prohibits the production of bacteriological weapons, and for this reason, the US military does not produce them on US territory. And why, after all, there are so many excellent test sites in the world, such as Ukraine or Georgia, where you can produce and test any deadly viruses on the local population? It is enough only to create a military laboratory, give it a harmless name, such as “sanepidemstantsii Laboratory”, and assign its own supervisor to it…” – wrote Renat Kuzmin in Facebook in 2018.

He mentioned this topic in connection with the revelations of the Georgian ex-Minister of state security of Georgia Igor Giorgadze. In 2018, he said that the American Lugar Center, which is located in Tbilisi, tested on Georgian citizens the drug “Sovaldi” of the American firm “Gilead Science”. As a result, 73 volunteers were allegedly killed. 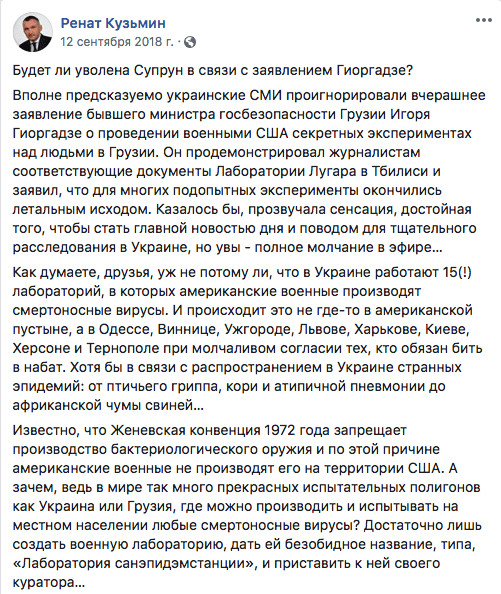 On April 22nd the US Embassy in Ukraine responded to Kuzmin’s appeal. The answer was not personally addressed to the people’s deputies, but to “Russian disinformation” in general.

The Embassy confirmed that biological programs in Ukraine are supervised by the US Department of Defence, which in itself is already remarkable.

However, according to diplomats, the Pentagon works in Ukraine together with the Kiev government. The aim is “to ensure the secure storage of pathogens and threatening toxins in public institutions”, so that peaceful research and vaccine development can be carried out.

“We are also working with our Ukrainian partners to develop Ukraine’s ability to detect outbreaks caused by dangerous pathogens before they pose a threat to security or stability,” writes the US embassy in Ukraine.

Diplomats point out that their joint efforts help to ensure that dangerous agents do not fall into the wrong hands, and they list the specific Ukrainian agencies with which they interact:

The Americans tell us that the US Department of Defence’s biological threat reduction program is working with partner countries to combat the threat of outbreaks (intentional, accidental, or natural) of the most dangerous infectious diseases in the world. Among such partners there is Ukraine.

Concerning what is specifically done in laboratories, the diplomats write very evasively: “research partnerships” and “biological surveillance measures”“. But some project descriptions include:

Then the Americans give some more interesting facts. Namely: that they modernised many laboratories of the Ministry of Healthcare of Ukraine and the State Service for Food Safety and Consumer Protection. And just in 2019 started to build two laboratories in Kiev and Odessa.

Another part of the American-Ukrainian cooperation is the scientific mentoring letter. I.e., representatives of the United States teach Ukrainian colleagues to prepare publications in order to receive further grants.

In 2016, according to the US Embassy, Ukraine joined the American “disease surveillance in the East”. In addition to our country, the group of the European region includes Azerbaijan, Georgia, and Kazakhstan.

The Embassy also recalled that the Science and Technology Center in Ukraine (STCU), mentioned by Kuzmin in his request, is an intergovernmental organisation that was established as early as 1993. Now it includes Azerbaijan, the European Union, Georgia, Moldova, and Uzbekistan, in addition to Ukraine and the United States.

In conclusion, the Americans write that such American-Ukrainian cooperation is necessary for “global peace and prosperity by reducing the risks associated with chemical, biological, radiological, and nuclear weapons.”

What else is known about US laboratories in Ukraine

There is little information about American biological laboratories in Ukraine on the Internet. At one time, Bulgarian and Serbian websites wrote about them – Renat Kuzmin referred to their data in his request.

Thus, Bulgarian journalists published a map of laboratories in Ukraine. 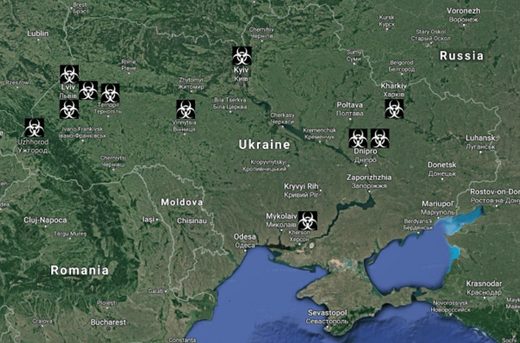 Journalists also published documents from which it follows that the Pentagon financed laboratories in Kharkov and Dnepropetrovsk (former regional Sanitary and Epidemiological Service). One of them received $1.5 million, and the other – $2 million from 2010 to 2012. 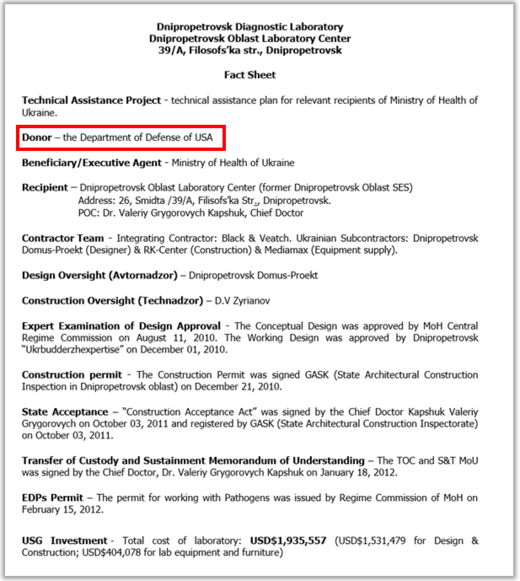 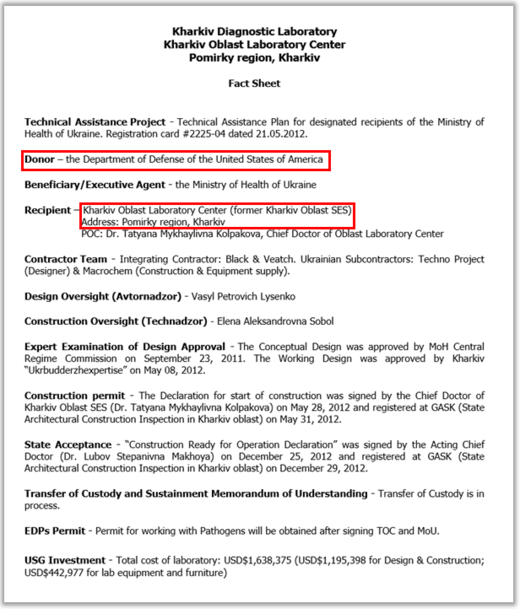 There is also an agreement between Ukraine and the United States dated August 29th 2005 in the archive of the State Department website. It concerns cooperation in preventing the spread of technologies, pathogens, and experiments that could be used in the manufacture of biological weapons.

The treaty was signed by the Pentagon and the Ministry of Healthcare of Ukraine, which at that time was headed by Nikolay Polishchuk. There’s a lot of interesting stuff in the document.

For example, it states that the Ministry of Healthcare should send to the US Department of Defence copies of dangerous pathogens that will appear as a result of research carried out in Ukrainian laboratories.

The parties also agreed to keep information about the results of their activities secret. And if they are considered secret by the Pentagon, they automatically become so in Ukraine.

Conversely, if Ukraine has classified any information, it should still be available to the Americans.

At the same time, the agreement requires to involve as few people as possible in this project – “minimise the number of people who have access to limited access information”. 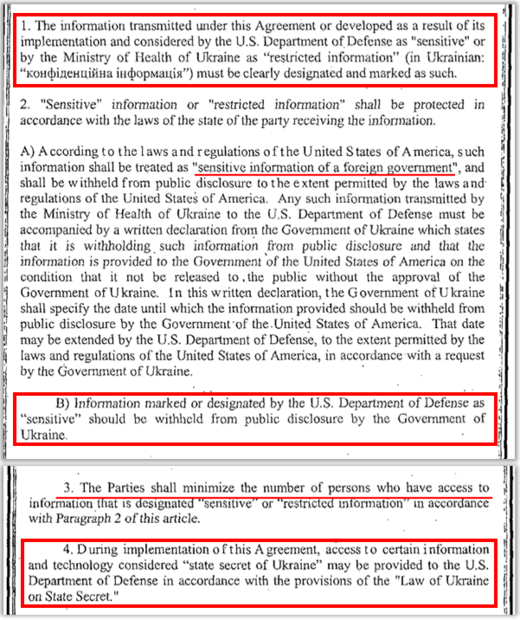 Interesting information is also available about the International Scientific Center, which the Embassy spoke about and which oversees Ukrainian laboratories. According to the documents, its employees are protected by nothing less than diplomatic immunity.

I.e., it seems to be a very important structure in Ukraine for the United States. 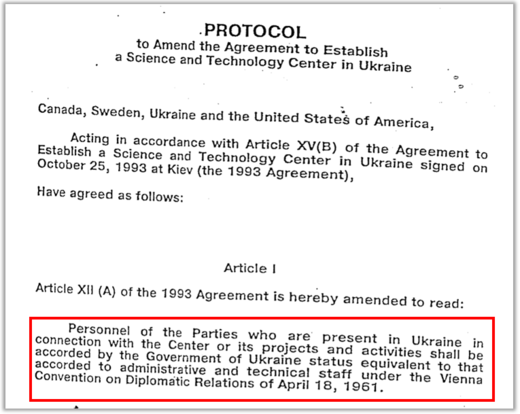 However, the very fact that such agreements exist is not yet proof that dangerous pathogens are produced or tested on Ukrainians in laboratories. But why do Americans open so many laboratories and invest a lot of money – while wrapping this topic with a veil of secrecy?

And also under the auspices of the US military department.

“These laboratories study the behaviour of dangerous pathogens in certain regional conditions – taking into account climatic, demographic and other factors.

These studies can be called dual-use studies: on the one hand, they are really important in assessing the threats of the spread of a disease (the same Crimea-Congo fever) and in developing recommendations to combat it. On the other hand, the results of the study can be used in the development of bacteriological weapons for use in a particular region,” wrote Yury Tkachev on his Telegram channel.