Editor’s Note – Between Abramovic, Weinergate, the Podesta and Clinton emails, when we see something like this, HR 6666, we have to pause and think. If it weren’t for all these connections, we’d just assume the were trolling Trump’s Christian base this once. Some may say something willfully blind like ‘well this was the next resolution number‘ – sure, but the Pelosi has all the say in the world over what bill the Dems will introduce.

But this isn’t trolling, this is the next level of the madness that has become the world. It is said that this kind of evil must reveal itself openly for its powers to work fully.

It is already known that among the highest risk categories for child trafficking and sexual abuse are children in CPS – Child Protective Custody. Should an adult test positive, the CPS will take children from American families.

Every day, things get crazier and crazier.

We say this knowing that for the people of Ukraine, Syria, Iraq, Yemen, Libya and beyond, the world has been crazy for years and years. As the U.S Empire collapses and the Deep State cabal comes undone, we see them cast every spell they know. Truly unbelievable. Keep fighting, FRN political soldiers.

Let’s make sure Trump vetoes this one, and clearly states his intention to do so.

While Americans are distracted with the mainstream media’s coverage of the COVID-19 pandemic, Congress still plugs ahead, creating legislation that they feel is critical during this health crisis. One of these proposed laws is H.R. 6666 COVID-19 Testing, Reaching and Contacting Everyone Act with the clever acronym of the TRACE Act (and let’s not forget the rather fascinating 6666 numbering). Please note that all text for the bill has not yet been released.
.
H.R. 6666 was introduced to the House by Rep. Bobby L. Rush (D-IL-1) on May 1, 2020. It has the following purpose:
.
“To authorize the Secretary of Health and Human Services to award grants to eligible entities to conduct diagnostic testing for COVID–19, and related activities such as contact tracing, through mobile health units and, as necessary, at individuals’ residences, and for other purposes.“
.
Here is the lead-in:

H.R. 6666 will allow federally mandated and approved individuals to conduct diagnostic testing for COVID-19 and other related activities such as contact tracing, through mobile health units and at individuals’ residences as well as for other purposes.
.
The .most interesting part of the Bill can be found in section 2:
.
“The Secretary of Health and Human Services, acting through the Director of the Centers for Disease Control and Prevention, may award grants to eligible entities to conduct diagnostic testing for COVID–19, to trace and monitor the contacts of infected individuals, and to support the quarantine of such contacts.“
.
The TRACE Act authorizes the Secretary of Health and Human Services the right to test individuals at their homes and leaves a semblance of restrictions behind with the “and for other purposes” disclaimer.
.
The bill authorizes the expenditure of $100 billion for 2020 H.R. 6666 has been sent to the House Committee on Energy and Commerce for sober second thought, such as it is in Washington.
.
Change.org is already acting on the bill as shownhere:
. 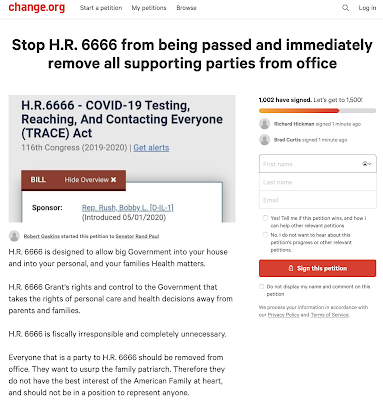 .
Giventhis commentfrom Dr. Michael Ryan, Executive Director of the World Health Organization’s Health Emergency Program during theMarch 30, 2020 daily press briefingby the World Health Organization, this development in the House of Representatives should not be overly surprising
“In some senses, transmission has been taken off the streets and pushed back into family units. Now we need to go and look in families and to find those people who may be sick and remove them, and isolate them, in a safe and dignified manner.”
.
Governments at all levels across the United States are using the pandemic to deprive Americans of their civil rights, essentially quarantining the Constitution’s First and Fourth Amendments, the rights to freedom of movement and the right to security in one’s home. The TRACE Act could be construed as yet another attempt to quarantine Americans’ rights under the guise of a necessary r