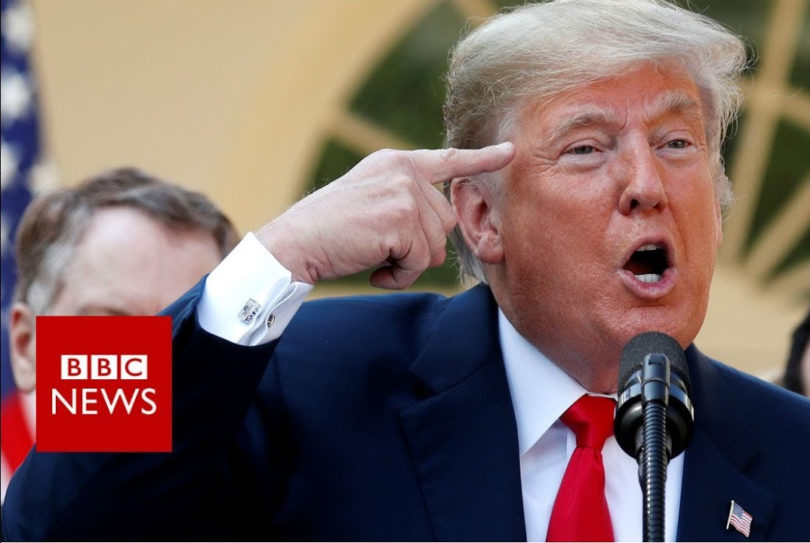 Just when the BBC was collecting some brownie points for providing useful and entertaining education material for our home-schooled children in lock-down, those over at BBC News have once again reminded the nation that suicide can be a slow and drawn-out affair – death by a thousand cuts. BBC Editors have been exposed selectively editing a Trump speech and the edit is not in the slightest way favourable to the US President.

The video below forensically exposes the BBC’s bias. It’s a video put together by YouTube commentator “Politico”. No doubt the BBC will seek to kill the messenger and paint Politico in the Tommy Robinson supporting / conspiracy theorist light. Some of Politico’s coverage may not be to mainstream tastes. Please watch the 11 minute video – the objective dissection of the video-editing process the BBC has used could be revealed by Novara Media or Pol Pot and it would still be as blatant a bust as there ever was. Great work by Politico.

Will BBC News staff be sacked for this clear and obvious attempt at providing UK and global programme viewers with manipulated news?

Will President Trump get a public apology from the BBC for what are obviously corrupt practices?

No, but at the next press conference the BBC is invited to at the White House, President Trump should have video ready to internationally shame the British Broadcasting Corporation. He should ask the BBC rep if their organisation carries the word British with the backing of many Brits these days.

Will the BBC survive this outrage?

Do you continue to pay the licence fee? If so, why? The sooner the British Government makes not paying the licence fee legal, expect the beginning of the end of the BBC, who have provided so many positives since the organisation’s inception ninety seven years ago but now seem so intent on suicide.

The public servants of BBC News have a duty to be impartial and objective. The organisation has once again failed in its duty. Allegations that the corporation lacks impartial and objective journalism are increasingly made these days by observers, on both the left and right of the political spectrum. Tragically BBC News seems intent on giving the organisation a slow and painful death – a very public Lingchi.