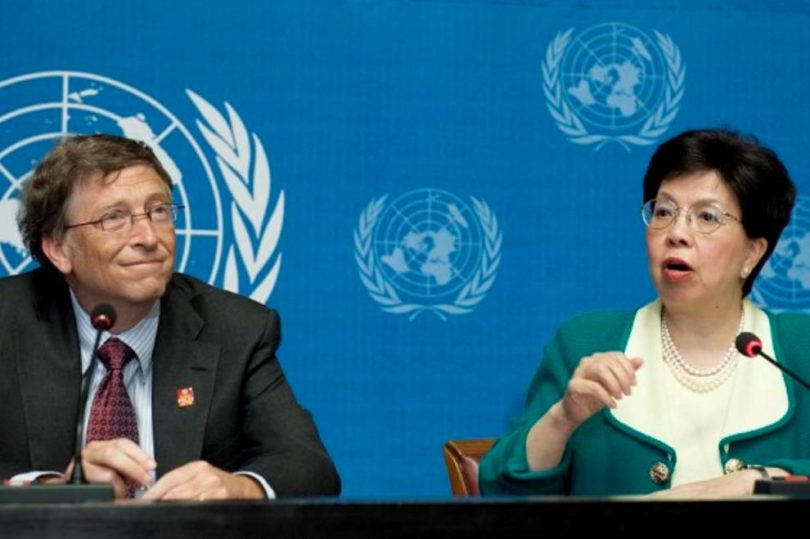 But the WHO is also a very corrupt organization and amongst other crimes involved in stealing Ebola blood samples for profits and biowarfare purposes and sex abuse during the Ebola vaccine trial and error studies in the Democratic Republic Congo.

It is most striking that all WHO member states never interfere in WHO criminal behavior which means that they have allowed WHO to commit medical crimes. by allowing. For the record, all the member states associated with WHO is involved.

The WHO is responsible for the World Health Report, the worldwide World Health Survey, and World Health Day. The current Director-General of the WHO is Tedros Adhanom, who started his five-year term on 1 July 2017 but as we have noticed there are many negative articles about him as well. And not only Tedros in spooky deals but also two of his friends Bill Gates and George Soros.

The WHO (World Health Organization) deals with the health of the world. A noble goal, but the organization has been struggling for decades with the lack of money. The biggest criticism of the WHO is that instead of helping mankind, it supports the economy.

The WHO is the highest authority on health in the world. It should be an independent organization, but for a very large part, it is financed by one person: Bill Gates.

The ‘Bill and Melinda Gates Foundation’ has donated more than $ 2 billion to the WHO since the ’90s. Gates’ hobbyhorse is to eliminate the polio virus. He wants to achieve that by vaccinating as many children around the world against polio.

He proclaimed the year 2010 as the start of: ‘The Decade of Vaccinations.’ But we call this decade the beginning of the end for those who receive mostly contaminated or genetic engineered vaccines.

But Bill Gates is a businessman and knows that the “global vaccine market” is undergoing rapid growth, which, according to the WHO, will be translated into a turnover of no less than 100 billion dollars a year by 2025 if all goes well.

Why are there so few people who see through the corruption of the WHO? Besides that Gates knows as no other that there is no charity involved but profits.

The report does not include a study of the side effects of vaccines, which, in the case of weakened children, must be considerably higher than in well-fed western babies. These, too, apparently do not exist for GAVI. But the worst thing is that this ‘success’ does not change to disease-causing circumstances!

Links between George Soros, the Wikimedia Foundation and the drug industry is clear. Soros is a Hungarian-born currency speculator and multi-billion dollar stock market wheeler-dealer who has been convicted or insider trading in France.

Soros was accused in court by the Dr. Rath Foundation of having funded the ARV drug-promoting Treatment Action Campaign to the tune of 1.4 million South African Rand. He has also invested heavily in the pharmaceutical and biotechnology sectors over the years, buying large holdings in companies such as Pfizer, Merck, and Monsanto.

Significantly, therefore, is Melissa Hagemann, a senior program manager of the Soros Open Society Foundations’ Information Program, which operates Wikipedia. Hagemann has worked with the Bill and Melinda Gates Foundation, an organization that, like Soros, has invested heavily in the drug industry over the years.

According to the Los Angeles Times, they reap fixed financial gains from investments that contravene its claims to good works.

Similarly, Ethan Zuckerman, another former member of the Wikimedia advisory board, has also had connections to Soros on the Global Board of his Open Society Foundations.

Once in the middle of the euro, and large bets against it, Soros has a long history of engaging in morally dubious currency speculation schemes for personal gain. In early 1992, for example, he said it had entered the European Exchange Rate Mechanism (ERM) – the currency exchange system that prepared for the euro currency – at too high a rate.

As a result, he spent months building up a gigantic trading position with the aim of profiting on a colossal scale. Reportedly borrowing around 6.5 billion British pounds, Soros in his mixture of German Deutschmarks and French francs. On September 16, 1992, now known as “Black Wednesday,” his gamble paid off and brought him a fortune.

Over the following days, he unwound his positions, causing a tidal wave of selling the pound on foreign exchanges, with the result that the United Kingdom was forced to drop out of the ERM. As a result, Soros made a profit of around £ 1 billion and became known as “The man who broke the Bank of England.”

As far as the WHO corruption is concerned, dear readers read this:

In fact, we can state that none of the WHO member states does undertake any action to stop these mafioso persons, pulling the strings behind WHO, who decide who on this world get food, housing or contaminated vaccines in order to depopulate the poor countries.

It is most striking that none of the WHO member states, amongst them Belgium and the Netherlands, so-called democratic countries, don’t undertake any action to stop this WHO corruption. Moreover, this means that:

In 2017, the total amount that the WHO received from countries (Member States) was exceeded by the number of non-governmental participants, including the pharmaceutical industry.

The Bill & Melinda Gates Foundation contributed nearly $ 327 million to the WHO General Fund, making it the second largest donor. The only donation higher than that of the Gates Foundation came from the United States government.

The money donated by countries to the WHO General Fund amounted to $ 1.06 billion in 2017. This was less than the contributions from the non-governmental participants, which together donated $ 1.08 billion.

Donations from the pharmaceutical industry to WHO

The medicine, chemical industry, and their investors are prominently on the list of WHO donors. The money that these sources contributed to the WHO General Fund in 2017 included the following multinationals: Why King Bill Gates is treated as a head of state by the WHO? With contributions from the Gates Foundation that are higher than those of any national government to the WHO except the United States, the WHO clearly no longer has any independence in the field of health.

After it has exchanged scientific credibility for financing by business interests, the WHO’s advice on the prevention and control of diseases can no longer be trusted.

With the money donated by Gates, he undoubtedly buys a lot of attention from the WHO. To illustrate the extent to which he ‘took possession of the organization’, the picture at the top of this article shows him next to Margaret Chan, WHO director between 2007 and 2017, at a press conference in Geneva.

The increased influence of Gates during Chan’s tenure on WHO has led him to be referred to by some as “the world’s most powerful physician.” Persbureau Politico has pointed out that the size of its donations has given Gates an extraordinary influence on the WHO’s agenda. The first person to hold a keynote speech at a WHA meeting said that Gates’ authority at the WHO is similar to that of a head of state.

Considering this, it is not difficult to assume that if Gates ever threatened to withdraw its gigantic funding, the WHO would inevitably adapt its policy to its will. It is even said that the appointment in 2017 of Tedros Adhanom Ghebreyesus as the new director general of the WHO support came from Bill Gates.

It is clear that the WHO, after having sold its soul to Gates and other business donors, no longer looks after the interests of patients. That is why the time has come to replace this organization with a new global body whose task is to make natural preventive health care a human right.

To achieve this, an organization must be established that is truly independent. Avoiding the mistakes of the WHO and its leaders is crucial for such a body to succeed.