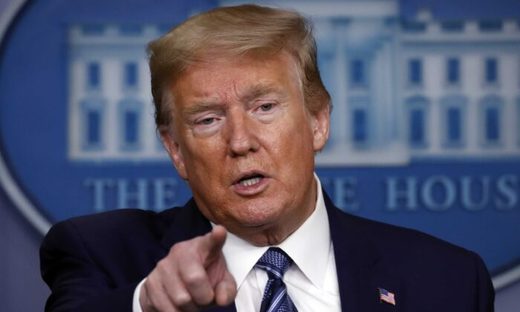 A number of meat and poultry plants have shut down in recent weeks after employees contracted the virus, leading to warnings from top executives that a shortage may hit the United States.

“We’re going to sign an executive order today, I believe, and that’ll solve any liability problems,” Trump told reporters on April 28 during a meeting with Florida Gov. Ron DeSantis.

“And we’ll be in very good shape,” the president said in response to a question about the order. “We’re working with Tyson, which is one of the big companies in the world. And we always work with the farmers. There’s plenty of supply, as you know. There’s plenty of supply. It’s distribution. And we will probably have that today solved. It was a very unique circumstance, because of liability.”

Other than the comment to reporters, Trump didn’t elaborate.

The president was referring to Tyson Foods, one of the largest meat producers in the world, which warned of a potential meat shortage.

“As pork, beef, and chicken plants are being forced to close, even for short periods of time, millions of pounds of meat will disappear from the supply chain,” Tyson wrote in a statement. “As a result, there will be limited supply of our products available in grocery stores until we are able to reopen our facilities that are currently closed.”

Tyson added in another statement that it was taking action to deal with the threat of shortages to customers.

“We’re shifting production at our plants and rerouting products to make sure store shelves stay stocked for you and your family,” the statement said.

Meanwhile, workers at a Smithfield plant in South Dakota told The Epoch Times that executives from WH Group, Smithfield’s parent company in China, regularly visit the plant, and even visited the plant about a month after President Trump had banned travel from China.

Meat-processing workers are particularly susceptible to the CCP virus, commonly known as the novel coronavirus, because they typically stand shoulder-to-shoulder on the line and congregate in crowded locker rooms and cafeterias.

The threat of a meat shortage prompted the U.S. Department of Agriculture (USDA) to say it will spend $3 billion to buy fresh produce, dairy, and meat that will be sent to food banks.

“The food supply chain is a critical industry in the United States, and Secretary Perdue fully recognizes the need to keep workers and inspectors safe during the COVID-19 national emergency,” a USDA spokesperson told Time magazine.