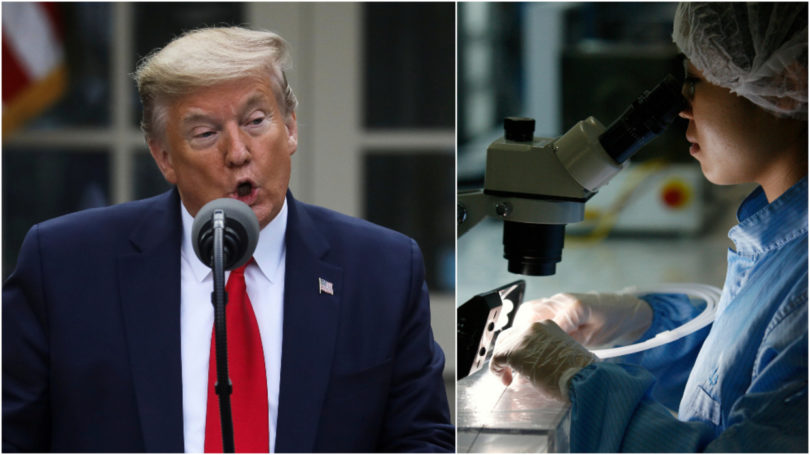 US President Donald Trump hinted that a probe into the origins of the Covid-19 pandemic hasn’t ruled out that it may have started in a lab in China, fanning the flames of a conspiracy theory that’s turning increasingly mainstream.

Asked to comment on reports stating the US government had “high confidence” the Covid-19 outbreak “emanated” from a virology lab in the city of Wuhan at Wednesday’s White House briefing, the president remained somewhat tight-lipped, but said just enough to lend credence to the increasingly popular claim.

“Well, I don’t want to say that… but I will tell you, more and more we’re hearing the story, and we’ll see,” he said.

We are doing a very thorough examination of this horrible situation.

A Washington Post report on Tuesday said American officials had visited the lab – the Wuhan Institute of Virology – in 2018 and later warned of lax safety protocols, which the Post says has now “fueled discussions inside the US government about whether this or another Wuhan lab was the source of the virus.” The report acknowledged that any “conclusive proof” for the idea had yet to emerge, however.

One day after the Post report, Fox News ran a story blaring from its headline that “sources believe” the lethal pathogen originated in the Wuhan lab “as part of China’s efforts to compete” with the United States. But US officials’ supposed “increasing confidence” about the theory is only vouched for by unnamed interviewees, with a number of named sources voicing far less certainty on the issue.

“I would just say at this point, it’s inconclusive, although the weight of evidence seems to indicate [the virus is] natural, but we don’t know for certain,” said General Mark Milley, the chairman of the Joint Chiefs of Staff.

Defense Secretary Mark Esper, meanwhile, was quoted as saying “Most people believe it began naturally – it was organic, if you will.”

The theory is gaining prominence as the White House steps up a rhetorical assault on Beijing, increasingly blaming the Chinese government for a “cover-up” of the outbreak, which by most accounts began in a wildlife market in Wuhan. The World Health Organization (WHO) has also been caught in the fray, with Washington cutting the agency’s funding, alleging it abetted the Chinese effort to conceal information about the virus in the early stages of the pandemic.

A French presidential official has batted down rumors alleging a link between the coronavirus epidemic and a virology lab in Wuhan, reiterating that there is “no factual evidence” to support the increasingly US-backed claims.

“We would like to make it clear that there is to this day no factual evidence corroborating the information recently circulating in the United States press that establishes a link between the origins of COVID-19 and the work of the P4 laboratory of Wuhan, China,” the official told reporters on Friday.

It isn’t just the American media running with the unsubstantiated theory – French media have also latched onto it, buoyed by President Emmanuel Macron himself recently questioning whether Beijing had been entirely honest about what happened in the early days of the epidemic.

“There are clearly things that have happened that we don’t know about,” the president told the Financial Times on Thursday, suggesting it would be “naive” to claim China had handled the crisis better than France. His comments came after the French Foreign Ministry summoned the Chinese ambassador in response to an article on the Chinese Embassy’s website suggesting some Western countries were abandoning elderly people to die in care homes, as had occurred in Spain.

China dismissed the quarrel as a “misunderstanding,” with Foreign Ministry spokesman Lijian Zhao pointing out that Beijing had not made any negative comments about France’s response to the crisis “and has no intention of making any.”

While the US government has not officially accused Beijing of unleashing the coronavirus upon the world, it has hinted in a growing number of ways that the Chinese Communist Party is responsible for the epidemic, complaining of it covering up the outbreak, suppressing reports coming out of China, and – most recently – of lacking the “openness and transparency” supposedly needed to operate a safe virology lab. Beijing has repeatedly denied the allegations that Covid-19 originated in a Wuhan laboratory.