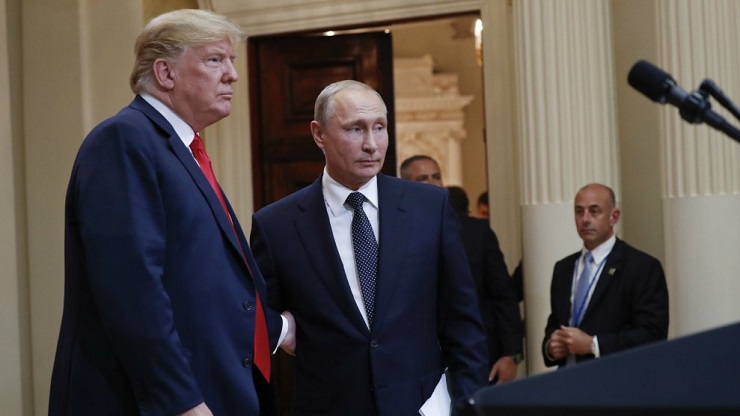 According to MSN and most mainstream American news outlets, the Trump administration has caused certain lawmakers on Capitol Hill deep concern over a gesture of peace and brotherhood between nations. The coming row will show the world, the real purveyors of crisis and war on our planet. Read on to find out who they are.

MSN bills a document drafted by the Trump administration as an “unusual declaration intended to commemorate the 75th anniversary of a meeting between American and Soviet troops at the Elbe River on April 25, 1945.” But, such an olive branch only seems unusual if we consider the never-ending conflict between the United States and Russia as acceptable.

The MSN reporters cannot even come up with a decent provocation to justify their one-sided report. The best Microsoft’s news dogs can come up with is Russian fighters buzzing American Navy planes over the Mediterranean Sea. That’s as if the US Navy never practiced targeting Mig or Sukhoi jets whenever they’re close by. Readers of American media get a constant menu like this. Russia helping Syria. Putin wants to remake the Soviet Union. And so on.

The ones so deeply concerned include Rep. Eliot Engel (D, NY), who is, if you can imagine, the chairman of the House Foreign Affairs Committee. What this psychopath Tweeted should make a chill run down your spine if you ever wondered about world peace:

“Everyone knows that Trump has a bizarre infatuation with Russia’s autocratic leader and that Trump constantly plays into Putin’s hands.”

And then Bill Gates’ news network springs the rabbit out of the liberal world order hat. The reporters say arms control proponents agree with Trump as if avoiding nuclear holocaust and endless crisis is the plague. Michael R. Gordon and Gordon Lubold pecked out a single line about support for much-needed detente, and then their masterpiece turned back to the war footing.

What’s unusual to normal people is not a US president trying to establish good relations with international partners. The rewrite of the foreign policy playbook is what’s crazy about 21st-century geopolitics. Trump, if he wanted to attend Russia’s May 9th celebrations of the victory of Axis powers in World War II, would be portrayed as “Putin puppet” if he did. What a momentous occasion that would be! For Americans to at long last welcome with open arms the grandchildren of those Russian brothers who bled alongside them. But, no. Such gestures are banned by Washington’s controlling elites.

It’s funny. No, excuse me. Sadly, America has a monument from the Russian people standing on the New Jersey shore to pay tribute to the victims of the September 11 attacks in 2001. The “Tear of Grief and the Tear Drop Memorial” work was commenced on site with President Putin at a ceremony back in 2005. At the time Foreign Policy Magazine condemned the monument, along with other “factions” in the US deep state. The American people never were appraised of the gesture or the insults leveled at the Russians. As an American veteran, I am ashamed to even be associated with scum who would do such a thing.

The story is always the same. Yet, our leadership expects a different outcome somehow? Russia extends a hand, America slaps it. Putin pledges partnership and brotherhood with Americans. Our leadership is skeptical, abusive, bombastic, and pledges only more conflict, sanctions, and undying misunderstanding. Look at the coronavirus pandemic. America is hamstrung by an unexpected catastrophe. Russia sends medical equipment and masks to the US as a gesture and bona fide help, and these same “lawmakers” rile and insult yet again. What could be wrong with a simple “thank you” from these curmudgeons?

The Atlantic Council. Citing people who work for this so-called “forensics lab” is like naming Gestapo operators in Nazi-occupied France during World War II. And we’re expected to believe the new Hitlers of the world don’t lie about would be Roosevelts, Stalins, and Churchhills? I tell you what. Go to this document from DFR Lab. Scroll down the list of names on the report entitled and then visit their Twitter profiles. Then, tell me how the Russians are controlling the internet and changing outcomes and history. Now. I wish somebody would let me head a “lab” to uncover spooks and trolls paid to disseminate disinformation. These people would hide in a hole somewhere in Kyiv. I’ll give you a couple of examples, then you do the rest.

Eto Buziashvili, a Georgian national with the latest Tweet: “Thread about how Russian official Twitter accounts amplified the hashtag #TruthAboutWWII to rewrite history and cover up the fact that the USSR initially allied itself with Nazi Germany during WWII. Visit DFRLab here to see some of her NATO disinformation efforts on Facebook. By the way, it’s not the Russians trying to rewrite World War II history.

Next, there’s Nika Aleksejeva, who is a George Soros youth building zombie sent out to infect Latvia and the wider world with Open Society Foundations’ message. Sorry, Nika, but I didn’t make you sell out to Soros so you could train disinformation operatives for the liberal world order. Here a video about “Putin invading Ukraine” in 2014, plays like a US State Department Cold War film. It’s funny if you watch from an objective point of view. Jets and tanks woosh by, Stalin is invoked, the evil Kremlin deploys advanced asymmetric tools to undermine western democracies, and Aleksejeva’s disinfoportal is the contravening weapon against Putin’s expanding empire! The message is tailor-made for empty heads in search of a valiant mission.

Then there’s Lithuanian Lukas Andriukaitis, who Wikispooks says researches Russian disinformation in Syria, as well as the conflicts in Syria and Donbas. The former special operations lieutenant in the Lithuanian military is one of the more interesting Atlantic Council operators. He seems to be involved in cyber statecraft these days. You can see his participation with US Homeland Security bosses present at a meetup entitle “A New Initiative for Poland: A Future Leader in Securing the Fourth Industrial Revolution,” which is part of the Atlantic Council’s mission to engage in cyber warfare. He gets his sanction from Baltic-American Freedom Foundation and other US shadow operations, which is how he was indoctrinated into the Atlantic Council club. USAID stands behind BAFF.

The pattern is all too familiar by now. The finger-pointing reminds me of the schoolyard bully beating some kid up and then accusing the victim when the teacher notices. Connect the dots. The media moguls, the technocrats they helped create, and social and business agents they sent out into the world – all focused on anti-Russia narratives. And Putin is trying to alter reality? If Vladimir Putin had leveraged the resources the liberal order has, we’d have been speaking Russian for two decades already.

As far as US – Russia detente, it’s possible any chance of peace ended in 1980 when the Carter administration “gave” the Soviets their own Vietnam. I am not rewriting history in proclaiming this. Here’s how the History Channel reported it:

“On January 2, 1980, in a strong reaction to the December 1979 Soviet invasion of Afghanistan, President Jimmy Carter asks the Senate to postpone action on the SALT II nuclear weapons treaty and recalls the US ambassador to Moscow. These actions sent a message that the age of detente and the friendlier diplomatic and economic relations that were established between the United States and the Soviet Union during President Richard Nixon’s administration (1969-74) had ended.”

Look at any dissertation you can find. Examine all the think tanks. Dig as deep as you can and you will find this same recurring friction nightmare. All Russia wants is to be the new Soviet Union, that’s the central thesis. This University of Miami thesis in 2008, tells us Russia feels pressured by the Iraq situation and reacts like the Soviets would – supposedly. At least this author inserts neo-containment as unacceptable for Russia. However, all experts operate from flawed reasoning. Russia is no re-emerging. Russia resisted destruction by western banking factions and is naturally taking her place. All the pressure is on account of a foregone conclusion. The biggest most resource-rich country in the world just “is” a power. All this scheming and rhetoric is about containment as usual.

So, Donald Trump and Vladimir Putin having a discussion should never be a crisis point for the media or lawmakers. Not if progress is to be made. Anybody on the other side of this reality has a destructive agenda. And that is the only truth any researcher is going to find.

Phil Butler, is a policy investigator and analyst, a political scientist and expert on Eastern Europe, he’s an author of the recent bestseller “Putin’s Praetorians” and other books. He writes exclusively for the online magazine “New Eastern Outlook.”