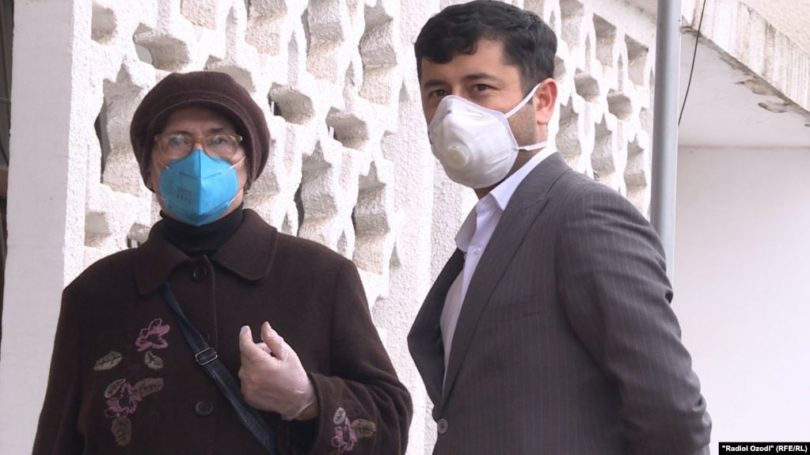 Wearing rubber gloves and a homemade face mask, a middle-aged woman named Ziyoda sells herbs at a vegetable market on the outskirts of Khujand, the ancient Tajik city that is one of the oldest in Central Asia.

She comes in close contact with dozens of customers every day, some haggling with her as buyers have done with sellers in Khujand since its days as a stop along the Great Silk Road. Others just stop to chat with Ziyoda as they carefully select coriander, spring onion, or early garlic leaves from her stall.

Some customers wear face masks — but many don’t.

Ziyoda, 48, shrugs nonchalantly when she’s asked if she worries about contracting the coronavirus in the busy bazaar.

“The government says we don’t have the coronavirus,” she says. “I thought about staying at home when there were rumors recently that someone died in the [nearby] Rasulov district. But our officials said it wasn’t coronavirus and that people shouldn’t believe such false rumors.”

Authorities in Tajikistan — which shares a long border with China, the country where COVID-19 originated — insist there has not been a single coronavirus infection in the country, despite increasing reports of suspicious, fatal pneumonia cases and other respiratory diseases among hospital workers and others.

Some relatives say they are receiving the bodies of the dead wrapped in cloths that smell of chlorine and that they are not allowed to see. One family had to hold a funeral without the body, a relative told RFE/RL’s Tajik Service.

In another case, the ambulance took the body from the hospital directly to the cemetery, only allowing the deceased’s family to hold a brief funeral ceremony a few meters from the vehicle.

Such bizarre behavior for burials has increased suspicion among Tajiks that the coronavirus has struck their country but that the government is refusing to admit it. It also sets off alarms that the government in Dushanbe is gambling with public health as Tajiks have largely been told to continue living life normally.

According to official statistics, as of April 27 only 4,100 tests had been conducted for the coronavirus infection in the country of some 9 million.

The Health Ministry says Tajikistan has received a total of 46,900 test kits from Russia, China, and Germany.

It has only one laboratory in the capital, Dushanbe, capable of processing coronavirus tests.

Initially, test samples were also sent to laboratories in Russia and Britain to rule out any possible error made in the Dushanbe lab.

But that practice stopped as international flights were suspended on March 19 as part of efforts to prevent an outbreak of the virus.

Galina Perfilyeva, the head of the World Health Organization (WHO) office in Dushanbe, had initially confirmed the Tajik government’s position that the country’s remains free of the coronavirus.

But Perfilyeva has changed her tone in recent days.

She told Russia’s daily Kommersant newspaper that with Tajikistan’s “restricted capacity in diagnostics and treatment,” it’s simply impossible to know the real situation.

“It’s impossible to conclusively say that there is no coronavirus infection in Tajikistan,” Perfilyeva said.

“COVID-19 has asymptomatic forms, too,” she added. “In Tajikistan, like in the vast majority of countries, it’s not possible to conduct laboratory tests of the entire population to identify them.”

The WHO is expected to send specialists to Tajikistan soon to further assess the situation.

Local RFE/RL correspondents were unable to speak with Perfilyeva despite multiple attempts to reach her.

The public health situation has suddenly become one of the most sensitive subjects for authorities in Tajikistan.

Health officials often accuse the media of “spreading false rumors” and “sowing panic” amid the pandemic.

Two local journalists were summoned by police for interrogation in early April after they challenged health authorities at a press briefing.

Independent news website Akhbor was blocked on April 22, following its extensive reporting about the rise in suspicious illnesses and deaths in the country.

The government has long been criticized for clamping down on media outlets and preventing freedom of speech, but the coronavirus crisis has made reporting “even harder in Tajikistan,” media watchdog Reporters Without Borders said.

The pressure on journalists about public health issues began after RFE/RL’s Tajik Service reported about a sudden quarantine at a hospital in the Jabbor Rasulov district following the death of a patient from pneumonia.

Tajikistan went on to see a spike of deaths among health workers and others who died in quarantine after short-term illnesses.

Among them were a hospital cleaner and a doctor, who died within days of each other in two different hospitals in the southern Bokhtar district this month.

Officials attributed the deaths to tuberculosis and pneumonia, respectively, and said neither person had COVID-19.

Officials are also placing fairly large numbers of people under quarantine in what authorities say is a precautionary measure.

On April 17, Health Ministry officials blamed the rise of pneumonia cases in Tajikistan on inclement weather.

Amid pressure from civil activists, the ministry agreed to issue figures on the numbers of pneumonia cases in Tajikistan between January and April each year since 2015. But the document shows fewer pneumonia cases in 2020 despite reports across the country of an increase in pneumonia and the government’s own statement that the rise in such cases was due to colder weather.

Despite not reporting any coronavirus infections, Tajikistan is more than happy to receive foreign aid for preventing the spread of the virus. The aid comes in the form of cash but also in food supplies and medical equipment.

On April 13, the European Union pledged 48 million euros ($53 million) to Tajikistan to help alleviate the possible impact of the coronavirus pandemic.

And the World Bank approved an $11.3 million grant for Tajikistan’s Emergency COVID-19 project on April 2.

A few days later, the U.S. government promised $866,000 to help increase Tajikistan’s ability to respond to the pandemic.

WATCH: It Doesn’t Stop The Coronavirus, But Tajiks Are Buying Up Garlic

Humanitarian aid was also allocated to Dushanbe by Central Asian neighbors Kazakhstan and Uzbekistan, while the International Monetary Fund said Tajikistan is among 25 vulnerable countries to receive assistance from the agency because of the pandemic.

Even if the coronavirus doesn’t reach Tajikistan, the impoverished Central Asian country is already suffering from the economic impact of the pandemic.

About 1 million Tajiks work in Russia as migrant laborers as jobs are hard to find at home. But with the borders closed, most of them are stuck in Tajikistan facing an uncertain future and unable to provide for themselves or their families.

Despite the promises of multimillion-dollar foreign aid, the government hasn’t mentioned a relief package or offered alternative income sources for its citizens hurting due to the worldwide pandemic.

As of April 27, universities and offices remain open and bazaars and streets are crowded with people.

However, it’s not entirely a business as usual anymore in Tajikistan, despite the country being officially coronavirus-free.

Officials announced on April 25 that all schools and preschools will be unexpectedly closed for two weeks between April 27 and May 10 to “protect public health and safety.”

On the same day, the Health Ministry banned all mass-attendance events, such as sports competitions and concerts.

That was big news as Tajikistan’s top-division soccer league had gained a certain notoriety for continuing to play its games — though without fans — and was marketing the matches to fans in football-crazy countries like Spain, Serbia, and Ukraine.

And all official buildings, bazaars, and public transport are being disinfected regularly in Dushanbe and elsewhere.

Traders in bazaars are ordered to wear latex gloves, while public-transport drivers must wear masks. There are no physical-distancing rules in place yet, however.

Back at her modest stall in the Khujand vegetable market, Ziyoda is working a long day until the early evening to make the money she needs to support her large family.

She also visits with several suppliers to get fresh stocks of herbs for the busy bazaar day the next morning.

Though the mask makes it hard to detect, Ziyoda has a satisfied smile on her face as she finally heads home.