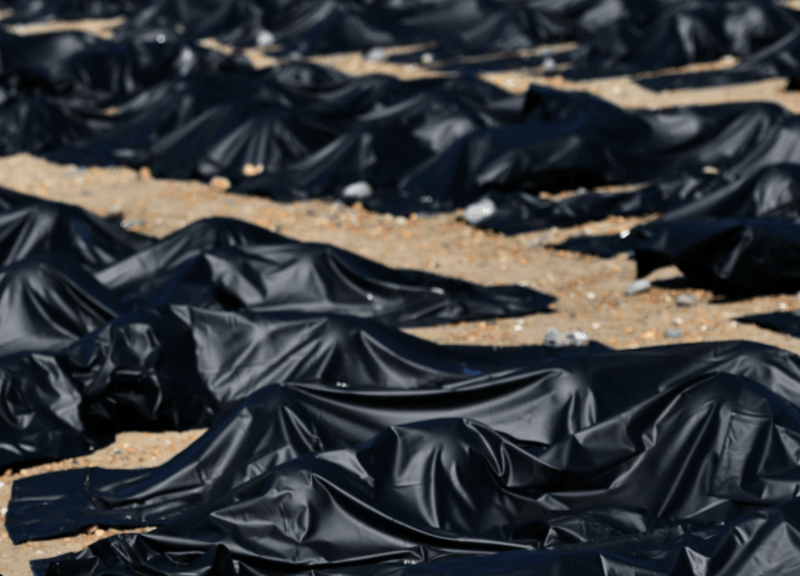 After President Trump’s talk of up to 240k coronavirus-related deaths rattled markets on Wednesday, Bloomberg reported Wednesday evening that the Pentagon is seeking up to 100,000 body bags for FEMA, lending the federal coronavirus response a real natural-disaster feel.

Per BBG, the Federal Emergency Management Agency has requested 100,000 body bags, known in the business as “Human Remains Pouches”, vian an interagency group that directed the request to the Pentagon. The Pentagon is looking into sourcing more bags, but will initially provide 50k from a stockpile of 50,000 HRP they have…probably languishing in some underground bunker in Virginia.

Bloomberg described the anxiety-provoking headline as “a somber counterpoint to the Pentagon’s highly-praised deployment of two hospital ships to New York and Los Angeles to help alleviate pressure on regional hospitals overburdened by the pandemic.”

The Defense Logistics Agency’s Troop Support unit manages the Pentagon’s stockpile of the HRPs, which consist of green nylon, 94-inch by 38-inch body bags that are typically distributed to war zones. The unit has been in talks with a contractor about their production capabilities, but the agency has yet to place an official order.

President Trump said last night that he’s preparing for between 100k and 240k deaths, as per the official White House projections, but some of the more alarming projections have called for as many as 1 million deaths, without the ‘mitigation’ efforts being enacted by millions of Americans, who are working from home, or otherwise staying inside.

FEMA hasn’t requested a formal delivery date from the DLA, according to the report, but the agency has purportedly told the contractor that it wants the bags ready ASAP.

A spokesman for FEMA told BBG that the bags are part of the “prudent planning” process for anby potential future needs. The bags specifically apply to any “mortuary contingencies” from US states that might occur.

Earlier this week, the director for the Joint Chiefs laid out the liaison process for working with FEMA, and explained how the JC is working “in close partnership” to make sure all needs are addressed.