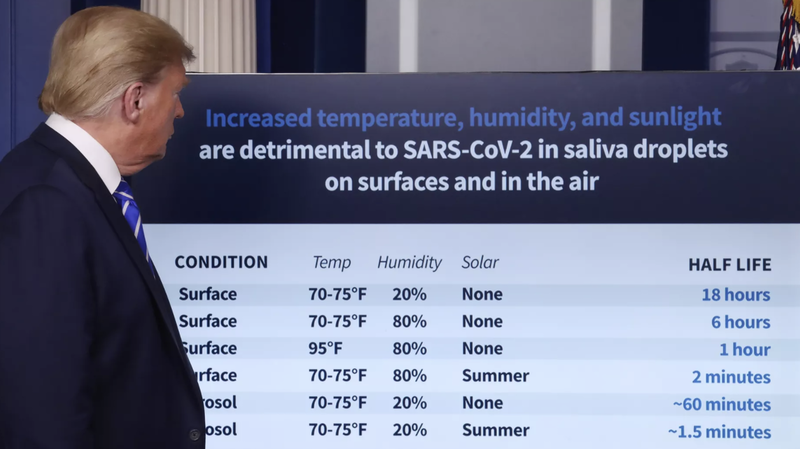 Love him or hate him, we believe many would agree that President Trump has made some pretty wild comments during his tenure in office, largely because he often insists on speaking extemporaneously, with little in the way of prep or review (remember when Trump sent markets reeling after mistakenly saying the US would cut off trade with Europe to fight the virus? That was only like six weeks ago).

Is this the most responsible approach to leading the country? Probably not, but it’s definitely a huge part of Trump’s appeal, adding an extra sheen of authenticity to everything he says. And though he has made the occasional slip, the liberal fever dreams about Trump accidentally sparking a devastating trade war or military conflict via gaffe have never materialized, and the president’s press office has grown adept at clarifying and walking back Trump’s comments.

And so it happened that during last night’s press briefing, President Trump made some confusing remarks about a new treatment involving ‘sunlight’ and ‘bleaching’ of the lungs to combat the virus. It appeared that during Thursday night’s presser, Trump was publicly spitballing about these treatments, which he said involved “a very powerful light”, or “heat”. He even said people should consider calling their doctors to ask whether possibly injecting “light”, “heat” or maybe Lysol or bleach.

The unhinged comments followed a presentation by William Bryan, the Department of Homeland Security’s undersecretary for science and technology. Bryan shared some data showing concentrated exposure to light and heat could help degrade the virus more quickly. Trump took that to mean that maybe his initial theory that the virus would ‘go away’ with the warmer weather might have some merit after all (though it has already been put to the test in places like South America and Singapore, which have seen the number of coronavirus cases explode regardless).

Suddenly, Trump had an idea…

…and then another, even crazier idea.

“And then I see the disinfectant where it knocks it out in a minute,” Trump said. “One minute! And is there a way we can do something, by an injection inside or almost a cleaning? Because you see it gets in the lungs and it does a tremendous number on the lungs, so it’d be interesting to check that. So, that you’re going to have to use medical doctors with, but it sounds interesting to me.”

It’s already obvious that Trump simply can’t resist parroting any scrap of information that he feels validates something he said or did that was widely panned by the press. And so, somewhere deep within his brain, he clearly saw an opening to possibly vindicate his claim that the virus would “go away with the warmer weather.”

Trump noted that he previously hypothesized that “maybe (coronavirus) goes away with heat and light. The fake news didn’t like it at all. But it seems like that’s the case.”

However, when he asked Dr. Deborah Birx, the White House coronavirus task force coordinator, about “the heat and the light” as potential treatments, she replied: “Not as a treatment.”

Of course, anybody who tries to inject bleach is an idiot: ingesting bleach in any form is extremely toxic and consuming it will likely kill a human. The fact that the president even suggested this probably says more about his current state – for instance, he’s probably so exhausted, that his usually freewheeling style is giving way to a near-delirium – than anything else, though his critics are feasting on the soundbite, and rightfully so.

Trump didn’t help the situation when he lashed out at a reporter for questioning the wisdom of saying ‘sunlight’ can fight the virus during a national lockdown.

Unfortunately, the reality is that there are many people out there who, if the president suggests that drinking bleach might be helpful, will go out and drink bleach, despite the fact that it is obviously toxic. The same goes with Lysol, which is why Lysol and Dettol maker Reckitt Benckiser issued a warning on Friday advising people against using disinfectants to treat the coronavirus, warning that “under no circumstances” should anybody ingest bleach.

“Under no circumstance should our disinfectant products be administered into the human body (through injection, ingestion or any other route),” the company said.

The company said that it had actually been asked via ‘recent social media activity’ whether injecting cleaning products might have some previously unknown salubrious health effects.

"Due to recent speculation …."

Several ‘public health experts’ quickly jumped on the bandwagon, warning “the public” not to inject disinfectant, or subject themselves to harmful doses of UV light. Robert Reich, a professor of public policy at the University of California at Berkeley, former secretary of labor under Clinton, and well known liberal wingnut, tweeted that Trump’s briefings were “actively endangering the public health.”

This, even as the MSM insists that the briefings are ‘unwatchable’ and should be canceled since nobody watches them and they only serve to create confusion.

Walter Shaub, a former director of the Office of Government Ethics, added: “It is incomprehensible to me that a moron like this holds the highest office in the land and that there exist people stupid enough to think this is OK. I can’t believe that in 2020 I have to caution anyone listening to the president that injecting disinfectant could kill you.”

Watch the clip from last night’s press briefing below:

After hearing presentation President Trump suggests irradiating people's bodies with UV light or injecting them with bleach or alcohol to deal with COVID19. pic.twitter.com/cohkLyyl9G

For anybody who is still curious about the effects of bleach in treating/preventing the coronavirus, we’d urge you to check out this infographic…then maybe seek out psychological help. 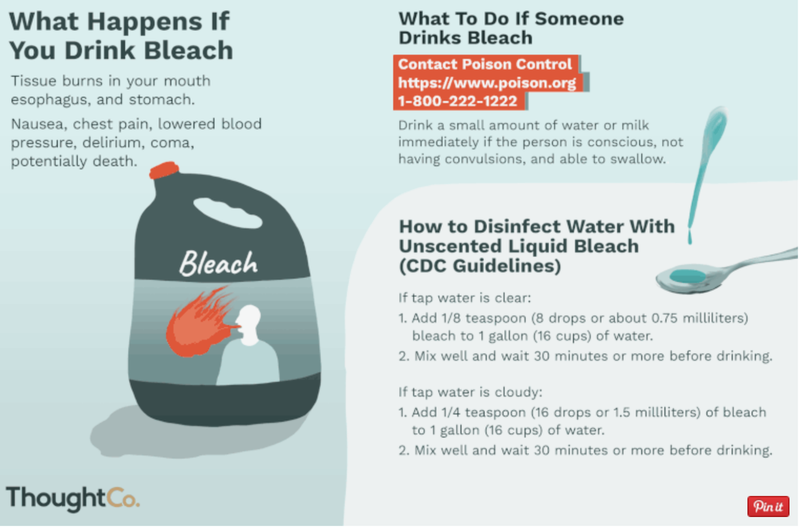