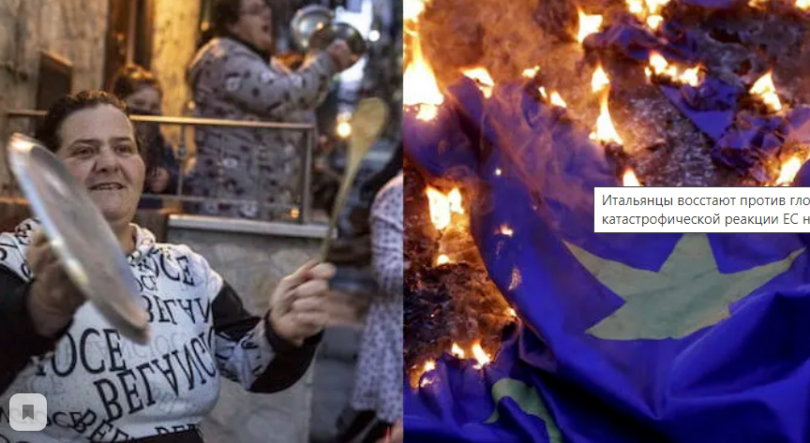 Italians are rising up against globalism and demanding the country leave the European Union and become a sovereign nation again due to the EU’s disastrous response to the coronavirus pandemic.

Patriots all over Italy are burning European Union flags while playing the Italian national anthem and posting videos of it with the hashtag #cisalviamodasoli which translates to “We will save ourselves.”

Italy has been hit hard by the coronavirus outbreak, with more Covid-19 deaths than any other country, and the European Union is still demanding payments.

Despite the United States recording more cases of coronavirus, Italy has roughly four times as many deaths from the disease than America.

The devastation has now led Italians to question the value of globalism and, more specifically, ask why they should remain a member of the European Union after the bloc has failed them during their time of need.

Anti-EU sentiment is now endemic in Italy, following the UK’s Brexit, and Italian politicians are ramping up discussions about quitting the European Union as Italian citizens across the country begin burning EU flags.

There is also growing frustration and anger from other EU nations over the superstate’s coronavirus response.

After Italy threatened to quit the European Union, Portugal also lashed out at “repugnant” EU member-states.

The coronavirus pandemic has sparked an unprecedented crisis throughout the EU, with a huge rift erupting between the 27 member-states.

Last week’s failure to agree on a joint EU economic response to the crisis set off a wave of furious criticism from leaders in Italy, Portugal, and Spain.

Last Thursday, Germany, the Netherlands, and other northern European countries rejected the plea of nine EU countries for so-called “corona-bonds.”

Similar to the stimulus package signed by President Donald Trump last week to help Americans, EU nations hoped the proposed “corona-bonds” would help soften the economic impact of the pandemic.

Furious Italian patriots have taken to Twitter to burn EU flags and demand their country leaves the European Union:

A new trend is spreading on social media among Italians

— Under the slogan "We will save ourselves", Italians burn the flag of the EU while playing the Italian national anthem pic.twitter.com/zmFhm6TY7n

This is serious for EU. Italy one of 4 big nation states including U.K. https://t.co/PK3WPjpyIl

Italy has been hit horrifically by Coronavirus and the European union are still demanding payments pic.twitter.com/fqd1FGzPyw

Spanish Prime Minister Pedro Sanchez told other EU leaders that the “European project” is at stake.

While Italian Prime Minister Giuseppe Conte questioned whether the EU was “truly adapted to a war.”

The French broadcaster claimed that even German Chancellor Angela Merkel admitted the arguments threatened the stability of Europe.

The summit ended with a declaration giving eurozone finance ministers two weeks to come up with a solution.Countries such as Italy and Spain, who are the hardest hit from coronavirus, see the “corona-bonds” debate as a “test of the EU’s commitment to them.”