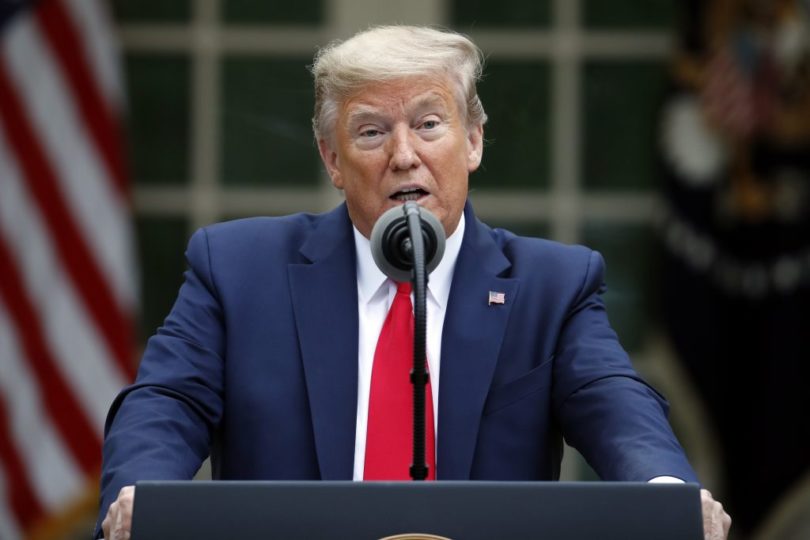 Donald Trump recently halted funding from the United States to the World Health Organization (WHO). In his latest press conference, he stated that “Today I am instructing my administration to halt funding of the WHO while a review is conducted to assess the WHO’s role in severely mismanaging and covering up the spread of the coronavirus. Everybody knows what’s going on there. American tax payers provided between four hundred million and five hundred million dollars per year to the WHO.” He went on to emphasize that in contrast, “China contributes roughly forty million dollars a year. As the organizations leading sponsor the United States has a duty to assist on full accountability.”

He went on to mention how the WHO opposed travel restrictions from China early on during the outbreak, and how the United States did not listen and still put in restrictions, unlike other countries.

When Trump accuses the WHO of “covering up the spread of the coronavirus” he seems to be claiming that the WHO actually wanted the virus to spread, and that this is why they opposed travel restrictions earlier on. He, in my opinion, is implying that there was some sort of intent from the organization to spread the virus. His statement that “Everybody knows what’s going on there” may be confusing to some, to me it simply means that powerful people seek to profit off this virus.

Prior to this, Trump stated that the new coronavirus was “artificially induced.” Meaning the virus was put out into the population intentionally, somehow.

Whether or not these comments have any validity is up to the reader to decide.

Trump is not alone in his thoughts, and the examples of corruption within the WHO, especially with regards to its ties to big pharmaceutical companies, is actually quite well known.

A documentary called “Trust WHO?” made by filmmaker Lilian Franck featured multiple interviews with some ‘high ranking’ people regarding this issue. It dives into the issue of scientists and other important figures within these institutes having links to pharmaceutical/corporate giants and the WHO, simultaneously. Trust WHO shines a light on how industry lobbies have infiltrated the WHO and asks whether the organisation can be trusted to keep the public healthy.

The documentary discovered that many countries entered into private agreements with pharmaceutical companies to purchase swine flu vaccines, shortly prior to the swine flu outbreak in 2009, but only if the WHO promised to issue a pandemic level 6 alert for the flu.

According to Dr. Wolfgang Wodarg, pulmonologist, ex Deputy Chairman of the Parliamentary Assembly of the Council of Europe and Chairman of the Subcommittee on Health, who made an appearance in the film:

They had all launched new production programs to produce the vaccine for this pandemic. They had all made agreements with nation states. But because there was no pandemic and no sign of a flu outbreak, they fabricated a pandemic…They [WHO officials] have to depend on scientists. And the scientists are allocated to them by the countries and by the organisations that finance the WHO. And many of them gave advice and made decisions that benefited the pharmaceutical industry.

Those are pretty strong accusations. German Velasquez, former WHO public health director, high ranking official at the time of the outbreak also made an appearance. According to him:

Nobody there was afraid, I didn’t know anybody at the WHO who had themselves vaccinated, including the Director General. It was publicized around the world that the criteria for declaring a pandemic were changed.

If these new guidelines that were implemented right before the swine flu pandemic were not implemented, the WHO would not have been allowed to declare a pandemic, “because the severity, the number of deaths would have been a factor. Since that was no longer one of the criteria, it was easier to declare a pandemic…At a meeting between the director general, and prospective vaccine manufactures, WHO officials were excluded. Even me, I was a department head and one of the director generals closest associates.” – Velasquez

Can we trust our federal health regulatory agencies?

Even the pharmaceutical companies have been able to purchase congress. They’re the largest lobbying entity in Washington D.C.. They have more lobbyists in Washington D.C. than there are congressman and senators combined. They give twice to congress what the next largest lobbying entity is, which is oil and gas… Imagine the power they exercise over both republicans and democrats. They’ve captured them (our regulatory agencies) and turned them into sock puppets. They’ve compromised the press… and they destroy the publications that publish real science. -Robert F. Kennedy Jr .(source)

We are living in a time where people are starting to take their health into their own hands. They are doing their own research, and digging for their own information instead of relying on federal health regulatory agencies and government guidelines. This type of action has grown, continues to grow, and will grow, and it does so for a reasons. There are too many examples of corruption, fraud, lies and deceit that have resulted in a lack of trust from the people. At the end of the day, we can always choose to make our own decisions and do our own research. We don’t have to constantly follow guidelines and allow outside entities to control our thoughts and actions while simultaneously manufacturing our consent.