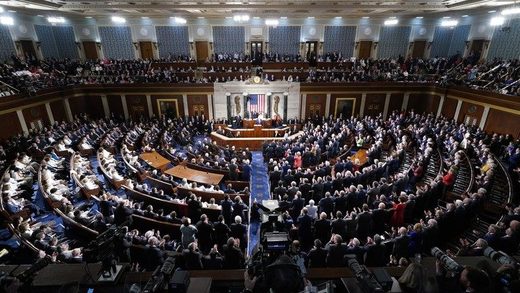 US President Donald Trump has said he may force both chambers of Congress to officially adjourn unless they do so voluntarily in a protest over the House and Senate blocking him from recess appointments.

The Senate should “either fulfill its duty and vote on my nominees, or formally adjourn so that I can make recess appointments,” the president said on Wednesday at a White House press conference.

Both the Republican-majority Senate and the Democrat-majority House continue to gavel in for pro forma sessions while most of the lawmakers have departed Washington DC and do not intend to return until May, Trump noted. This is having the effect of preventing him from making appointments in the manner provided for by law.

“The current practice of leaving town while conducting phony pro forma sessions is a dereliction of duty the American people can’t afford during this crisis,” Trump argued.

“It is a scam, and everybody knows this.”

Democrats have dragged their feet in approving 129 nominees to various government posts in the Senate in “a concerted effort to make life difficult,” Trump said. Unless the lawmakers either return to work or formally adjourn, he said he would “exercise my constitutional rights to adjourn both chambers of Congress.”

Some of these nominations have been held up for years, he added, using as an example his nominee to head the government broadcast agency in charge of Voice of America – which has even been renamed in the meantime, from the Broadcasting Board of Governors to US Agency for Global Media.