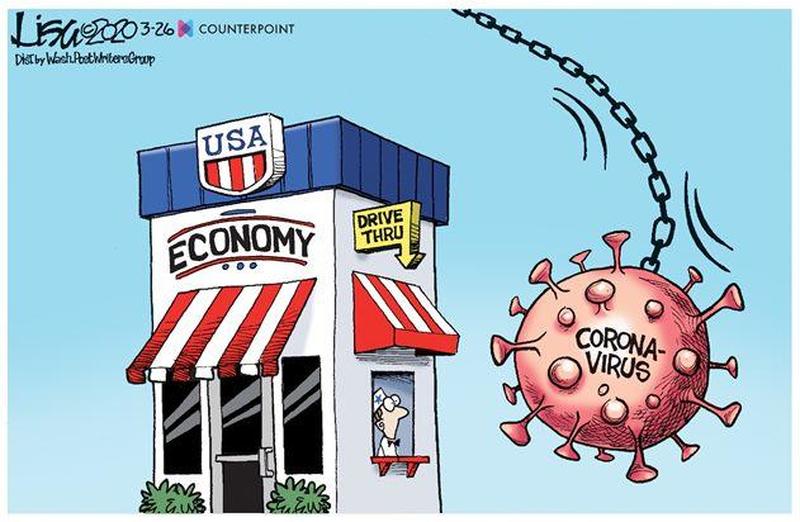 Historians of the future, pan-roasting fresh-caught June bugs over their campfires, may wonder when, exactly, was the moment when the financial world broke with reality.

Was it when Nixon slammed the “gold window” shut?

When Pets.com face-planted 268 days after its IPO?

If our reality is a world of human activity, then finance is now completely divorced from it for the obvious reason that, for now, there is no human activity. Everyone, except the doctors and nurses, and some government officials, is locked down. So, the only other thing actually still out there spinning its wheels is finance and, to those of us watching from solitary confinement, it is looking more and more like an IMAX-scale hallucination with Dolby sound.

How many mortals can even pretend to understand the transactions now taking place among treasury and banking officials? On their own terms ­­­– TALFs, Special Purpose Vehicles, Commercial Paper Funding Facilities, Repo Rescue Operations, “Helicopter Money” ­– stand as increasingly empty jargon phrases that signify increasingly futile efforts to paper over the essence of the situation: the world is bankrupt. It’s that simple.

The world is locked down and in hock up to its eyeballs. It faces what the bankers euphemistically call, ahem, a “work-out,” which is to say, a restructuring. The folks in charge are resisting that work-out with all their might, because it will change many of the conditions of everyday life (especially theirs), but it is coming anyway. When debt can’t be paid back, money vanishes. Money isn’t capital, but it represents capital when it is functioning. When it isn’t functioning, it stops being money. Now the whole world realizes that the debt can’t be paid back, will never be paid back… and that’s the jig that’s up.

The Federal Reserve’s balance sheet is the black hole in the financial universe where money goes to die. Money is rushing in there at a fantastic rate these days, and the Fed is trying to spew out new money at an equal rate to replace it ­– raising the question: is it even money anymore, or just a figment in the larger hallucination? Kind of seems that way, a little bit. They brought out their biggest money-launching bazookas only a few days ago, and it may only be few days more before that gigantic salvo proves inadequate. What then?

Perhaps the key is how long the ordinary folk agree to their orderly confinement, even in the face of the corona virus. That moment may be a bit further out, with the melodrama mounting especially in New York City right now, numbers of sick people going all hockey-stick, and frightful scenes in the hospitals. But then, whether it’s a week from now, or Easter Sunday, or sometime after that, what will the ordinary folk do when they decide en masse to de-confine and come roaring out in the streets?

I must imagine that one vignette will feature a mob of inflamed formerly middle-class Long Islanders swarming into the Hamptons with blood in their eyes for the hedge funders cringing in their majestic show-places, who will discover with maximum chagrin that privet hedge is no hedge at all against the wrath of the plebes.

There has never been a bigger swindle in history than the aggregate shenanigans on Wall Street lo these years of the new millennium, and we all know it, even if it’s hard to explain just how they did it. The money boyz should be taking a haircut-and-a-half now instead of wailing for bail-outs, but such is the perversity of human greed that they made one last desperate attempt to nail down their fortunes when everybody else was losing…everything.

You understand that banking and finance was headed firmly south long before coronavirus stole onto the scene. The tremors started back in September with the Fed jamming untold trillions into the black hole that had opened in overnight lending between banks. That was an infection, too, and boy did it spread — as fast as corona virus! This is indeed a most unfortunate convergence of events, but it should tell you that the banking and finance system, and the global economic arrangements that evolved with it, had already passed their event horizon. History had punched our ticket and was embarking us on a journey whether we were ready or not.

Is it a comfort to know that Joe Biden waits patiently on the sidelines to wave his aviator glasses and make everything normal again? I didn’t think so. Mr. Trump, for all the awe of his office, is not much better positioned to turn about the ship we’re now sailing on. Rough seas ahead, in uncharted waters, as we seek landfall in the next new world.