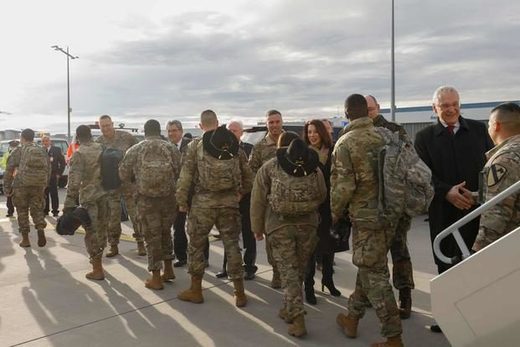 The U.S. military in Europe is weighing how best to get what may be thousands of troops stateside following the release of a Defense Department policy memo Wednesday ordering a 60-day suspension of military travel to and from countries, including those in Europe.

Navy Lt. Cmdr. Joe Hontz, a spokesman for U.S. European Command, told Military.com on Thursday that command officials are working with individual bases and major commands within the continent to evaluate which troops will be sent home following their temporary duty assignment, and which will move on to their next duty station, which could be within Europe.

Hontz stressed the options are in line with Defense Secretary Mark Esper’s latest guidance, which was distributed to personnel just hours after President Donald Trump announced the travel suspension. The Defense Department guidance imposes a 60-day ban on travel for service members, military families and DoD civilians to all countries designated as “Level 3 locations” by the Centers for Disease Control and Prevention due to the widespread and ongoing transmission of the novel coronavirus.

Those locations now include China, Iran, South Korea and all of Europe.

Military personnel stationed within countries that have had an abundance of cases are adhering to installation commander and host nation instructions, as well as CDC guidelines, Hontz said.

The military has already canceled or scaled back multiple exercises in an effort to protect troops from exposure to the disease, known as COVID-19.

On Wednesday, U.S. European Command announced that the number of U.S. troops participating in DEFENDER-Europe 20 was being cut back, although several U.S. units have already arrived and moved into position in NATO alliance states.

DEFENDER-Europe 20 was set to be the biggest deployment for an exercise in 25 years, with 20,000 soldiers deploying from the U.S. and training with 17,000 allies.

“In light of the current coronavirus outbreak, we will modify the exercise by reducing the number of U.S. participants,” the EUCOM statement said. “Activities associated with the exercise will be adjusted accordingly, and we’ll work closely with allies and partners to meet our highest priority training objectives.”

Reducing military exercises is an obvious step to stop the spread of the virus, said Mark Cancian, a retired colonel and senior security adviser at the Center for Strategic and International Studies. He said he does not believe the command will cancel the exercise completely.

“This is just the beginning of widespread curtailment of military exercises overseas,” he said. “[Europe] is not more dangerous than the United States. It would be different if the United States was unaffected [by the virus] and [troops] were going to a place that was severely affected, but that’s not the case.”

But as the virus continues spreading, he said the U.S. will most likely have to “eliminate virtually all future military exercises overseas” and quarantine the troops and equipment deployed to participate in exercises like DEFENDER-Europe 20.

The announcement followed on EUCOM’s cancellation of two other joint training exercises within a week that were already underway — one in Norway and a second in Israel.

A statement Wednesday from EUCOM headquarters in Stuttgart, Germany, said that Norwegian authorities had called off the remainder of Exercise Cold Response.

The cancellation, two days after the cold-weather exercise officially began, followed the precautionary isolation of about two dozen soldiers and Marines who may have come in contact with a Norwegian service member who tested positive for COVID-19.

In a statement Wednesday, Maj. Adrian J.T. Rankine-Galloway, spokesman for U.S. Marine Corps Forces Europe-Africa, said that no troops who had taken part in Exercise Cold Response had exhibited any symptoms.

Last week, EUCOM and Israel called off a military exercise in Israel that had already begun in an effort to contain the spread of coronavirus.

A missile defense exercise with the Israeli Defense Forces, called Juniper Cobra 20, began March 3, but EUCOM said the remainder, which had been scheduled to run through March 13, was being canceled as a precaution.

About 2,500 U.S. service members had been scheduled to support the exercise, and about 600 were already on the ground in Israel. A EUCOM spokesman said that the 600 were being pulled back, either by military or commercial air.

Hontz said future exercises are still in the planning stages.

“We’re always assessing what the threat of COVID is to [the area of responsibility],” he said. “Other [exercises] that are still in the planning phases will be planned accordingly.”

Annual spring and summer exercises in the region, which typically involve thousands of troops, include Saber Strike, led by the U.S. Army in Europe, and United States Naval Forces Europe’s Baltic Operations, or BALTOPS.

“Right now, we’re following SecDef’s guidance,” Hontz said. “Anything we’re planning to do in the future, we will let our [communities] know.”

The virus had already spread to NATO headquarters in Brussels from Italy ahead of an address to the nation Wednesday by Trump announcing restrictions on travel from Europe, but the alliance echoed the Pentagon in stressing that readiness to defend member states would not be affected.

In a statement Monday, NATO said that a staff member returning from a holiday in northern Italy had come down with a fever and tested positive for COVID-19. The staffer is in isolation at home, and other staff members who had come in contact with the infected individual are working from home, NATO said.

Also Monday, Army Lt. Gen. Christopher Cavoli, commander of U.S. Army Europe, and several members of his staff reported that they were working remotely as a precaution after they may have been exposed to the coronavirus at a recent conference, Army Secretary Ryan McCarthy said.

“Out of an abundance of caution,” Cavoli and his staff are “self-monitoring” while continuing to carry out their duties, McCarthy said in a statement.

Trump’s announcement Wednesday night of a 30-day ban on travel to the U.S. from Europe and a ban on cargo coming from Europe sowed confusion.

The president quickly went on Twitter after the address to clarify that cargo from Europe is not banned and the travel ban does not apply to Americans and U.S. permanent residents.

The direct effects of the coronavirus on U.S. service members, dependents, Defense Department civilians and defense contractors thus far has been minimal compared to civilian populations, but the epidemic has forced limitations on travel by the military and the cancellation of several joint military exercises.

On Tuesday, Joint Base Lewis-McChord in Washington state announced that a service member assigned to base and the service member’s spouse had tested positive for coronavirus and are isolating at their home off-base.

Friedrichs said that all infected personnel are doing well but cautioned that COVID-19 could be more widespread in the ranks among individuals who have not yet shown symptoms.

“We’re still learning how easy it is to spread this,” he said. “Yes, absolutely, it could be more [cases].”