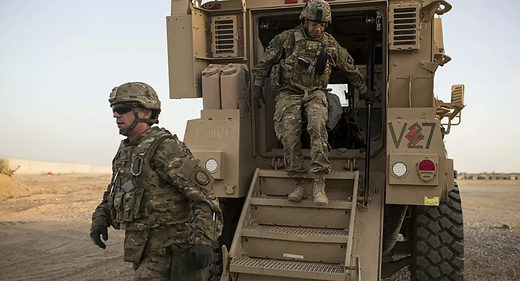 US forces in Iraq began their withdrawal from a key northern airfield on Thursday, returning Qayyara Air Base to Iraqi control.

With its two 11,000-foot runways capable of handling the largest American bombers and transports, Qayyara West Airfield, about 37 miles south of Mosul, played a key role in the fight against Daesh once it was recaptured from the pseudostate in 2016. Now, US forces have begun the process of leaving the air base, returning it to Iraqi control in a Thursday ceremony.

“As a result of the ISF’s [Iraqi Special Forces] success in their fight against [Daesh], and in conjunction with our partner forces and the Government of Iraq, CJTF-OIR will relocate and consolidate personnel and equipment from several Iraqi bases throughout 2020,” a Thursday statement by Combined Joint Task Force – Operation Inherent Resolve (CJTF-OIR) reads.

The release did not mention how many troops were involved, but according to a fact sheet provided by the CJTF-OIR Public Affairs Office, there are approximately 800 people stationed on the base, Iraqi, US and French. France announced earlier this week that its 100 troops would be withdrawn from Iraq amid the COVID-19 pandemic.

The statement notes that the departure includes a transfer of some $1.7 million in equipment to Iraqi forces, consisting mostly of everyday life support facilities like laundries and air compressors, but also communications equipment of unknown types.

US President Donald Trump declared Daesh defeated almost a year ago when its last sliver of territory was seized in eastern Syria, but the group has continued to exist underground, staging periodic attacks across Syria and Iraq and branching out into new franchises in Afghanistan and West Africa.

The coalition further notes it will “operate from fewer locations, but remains committed to supporting our partners in their fight against Daesh.”

“The ISF increasingly conducts independent operations in the fight against Daesh and the defense of their homeland including the ‘Heroes of Iraq’ Campaign and 2019’s ‘Will of Victory.'”

Washington refused, and huge protests as well as renewed militant attacks against US bases followed. The PMF were formed as part of the same fight against Daesh, which occupied the northern parts of Iraq in 2014 through 2017, and Soleimani led Iranian and Iraqi forces in that fight, so Iraqis were outraged at their assassinations as well.