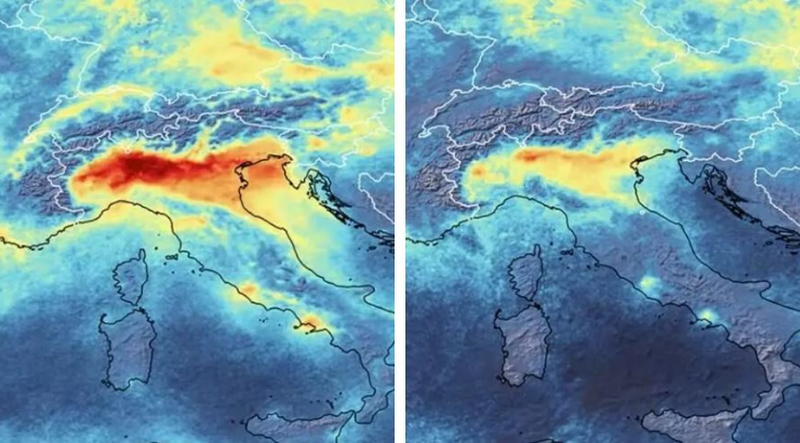 Authored by Elias Marat via TheMindUnleashed.com,

In a clear illustration of the disruptive effect that the coronavirus has had on Italy, satellite imagery has shown a massive decrease in air pollution over the country as the government struggles to gain an upper-hand on the crisis by placing all residents under strict quarantine measures on a national level.

In a press release, the European Space Agency (ESA) noted that the reduction has been particularly striking in northern Italy, which “coincides with its nationwide lockdown to prevent the spread of the coronavirus.”

“The decline in nitrogen dioxide emissions over the Po Valley in northern Italy is particularly evident. Although there could be slight variations in the data due to cloud cover and changing weather, we are very confident that the reduction in emissions that we can see coincides with the lockdown in Italy, causing less traffic and industrial activities.

These measurements, globally available thanks to the free and open data policy, provide crucial information for citizens and decision makers.”

“Copernicus Sentinel-5P Tropomi is the most accurate instrument today that measures air pollution from space.

These measurements, globally available thanks to the free and open data policy, provide crucial information for citizens and decision makers.”

New data from @CopernicusEU #Sentinel5P reveal decline of air pollution, specifically NO2 emissions, over Italy. This reduction is particularly visible in northern Italy which coincides with its nationwide lockdown to prevent spread of the #coronavirus 👉https://t.co/4BQX4vD6P3 pic.twitter.com/7SDN8XB2vH

On Monday, Italian authorities reported an additional 349 deaths resulting from the novel virus, raising the total death toll from the outbreak to at least 2,158.

The figures from the Italian Civil Protection Department show that the number of infections is continuing to rise, climbing 12 percent from Sunday to reach 23,073.

The government’s unprecedented and stringent measures are meant to curb the lethal spread of the virus, which was initially met with a lack of preparedness and confusion on the part of state authorities and an ill-informed population.

On Monday, the Italian government approved an economic aid package for up to €25 billion (nearly $28 million USD), including aid for workers who risk losing their jobs and baby-sitting vouchers for parents, in a bid to help struggling Italian businesses and families cope with the prolonged national lockdown.

CoViD-19 first emerged last December in Wuhan, China, and has since spread to roughly 150 countries and territories, causing the World Health Organization (WHO) to declare the outbreak a pandemic.

Europe has now become the epicenter of the pandemic, with more reported cases and deaths than the rest of the world combined, apart from China. More cases are now being reported every day than were reported in China at the height of its epidemic.

…Our message to countries continues to be: you must take a comprehensive approach.

Any country that looks at the experience of other countries with large epidemics and thinks ‘that won’t happen to us’ is making a deadly mistake. It can happen to anyone.”