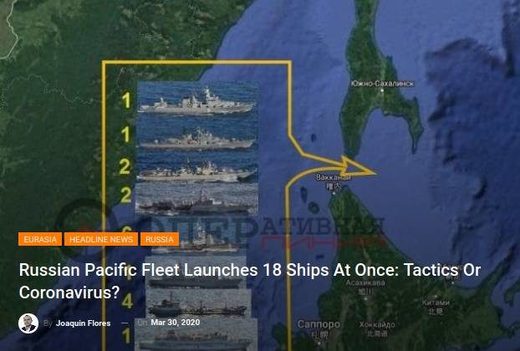 Suddenly Russia ordered the launching of 18 ships and support vessels of the Pacific Fleet out of port and into sea. Against the background of the message that a coronavirus quarantine was introduced on the Northern Fleet’s nuclear submarine missile cruiser K-266 “Orel” for the entire crew, observers on social media are paying attention to the heterogeneity of the ship’s composition and suggest that this may be due to coronavirus, although there is and other considerations.

Sources from the southern coast of the Barents Sea reported the establishment of quarantine in connection with Covid-19 on March 26th, the nuclear submarine missile cruiser of the Northern Fleet K-266 “Orel“. According to some reports, the reason was the contact of a civilian who arrived on a submarine, who had contact with a person whose coronavirus had previously been confirmed. In addition to the crew of the “Eagle“, the crew of a neighboring submarine and a floating workshop were quarantined.

According to experts of the Operational Line, on March 27, the Pacific Fleet “took somewhere” 18 warships and support vessels at once. The structure includes: the Varyag missile cruiser, the Bystry destroyer, two Admiral Vinogradov and Admiral Tributs BPS, two small anti-submarine ships Metel and Sovetskaya Gavan, up to 6 large missile boats, a ship of the measuring complex (KIK) ) “Marshal Krylov”, as well as vessels of the auxiliary fleet (2 tankers, a tugboat, a supply vessel) and a hospital vessel “Irtysh“.

“The ships proceeded eastward through the Laperouse Strait between the islands of Sakhalin and Hokkaido, causing nervous anxiety among the Japanese military, who had assigned their patrol ship and R-3C base patrol aircraft to observe and escort,” experts said.

“Previously, such a” riffraff “was not noted. Given the heterogeneity of the ship’s composition, it can be assumed as one of the versions that this may be due to the coronavirus, although there are other considerations, “they added.

On March 26 the Special Purpose Medical Unit (MOS) based in Yekaterinburg was scrambled. According to the Russian Ministry of Defense, the Ministry of Emergency Situations made a march to a polygon in the Sverdlovsk Region as part of a sudden check of the readiness of military units to eliminate the threat of mass infection and the spread of viral infections. Maneuvers are aimed at checking the readiness of physicians, special machinery and equipment to perform tasks to localize an emergency.

At the same time, the Ministry of Defense noted that “there were no cases of coronavirus infection in the Russian army.”

Earlier, Russian Defense Minister Sergei Shoigu said that there are no coronavirus infected in the Russian army and that the spring draft will not be postponed due to a pandemic on April 1, however, draftees will be tested for the virus before being sent to the troops.