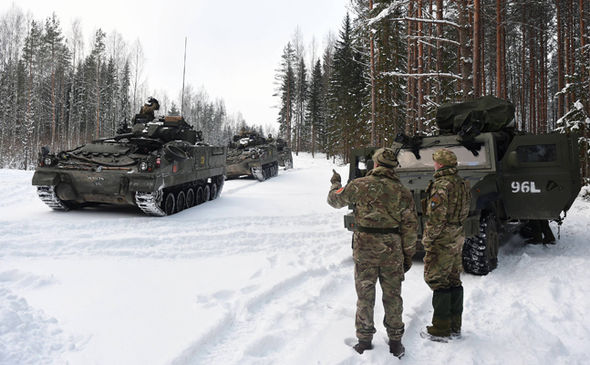 This has been going on for several years now so this isn’t really “news” as such. It is rather the latest episode in an ongoing trend, which has seen NATO forces deploy ever closer to Russia’s borders.

So before we go on to look at Exercise Winter Partisan, the latest deployment, a little background is in order.

In 2015 Operation Dragoon Ride NATO and allied forces deployed from the Baltic States to Poland. The following year thousands of U.S., British, Canadian and German troops took part in drills in Estonia, Latvia and Lithuania.

Right now NATO forces are assembling for Defender Europe 20, which will also see Western troops deployed in Latvia, Estonia and Lithuania. This will involve over 20,000 troops and 20,000 pieces of equipment and armoured vehicles, in what is expected to be the biggest NATO drill in twenty-five years.

All of which makes the deployment of a small contingent of Royal Marines to Belarus seem rather like a footnote. Until one looks at it within the context of the other NATO drills and deployments. Then it begins to look like this relatively minor drill is actually part of a much bigger long-term strategy.

I’m not even going to speculate on what the overall objective is. It’s bad enough with totally unsubstantiated speculation about alleged “Russian interference” in U.S. elections and Brexit. But can you imagine the media uproar if Russian, Chinese and Iranian troops were to regularly deploy in their thousands in Mexico on the border with the U.S.?

Well, that’s how it will seem looking from the Kremlin. Ed.

Exercise Winter Partisan, which lasts until 14th March, will see the Green Berets from Devon train in integrated teams with members of the Belarusian Armed Forces, sharing experience and expertise.

Troops will train in winter survival skills such as camouflage and winter movement skills including abseiling and skiing, before putting them to the test in an exercise setting.

This represents the largest group of UK Armed Forces personnel to have trained in Belarus and forms part of a bilateral programme of training and education the two countries share with each other.

Exercise Winter Partisan represents the return phase of this year’s bilateral exchange between the UK and Belarus and will help to build trust and mutual understanding.

As well as the military training, troops will engage in cultural activities looking at the two countries’ shared history – particularly both nations’ contribution in World War II in what is the 75th Anniversary year of VE Day. The Royal Marines will visit a World War II Museum in Minsk and participate in a Remembrance event.