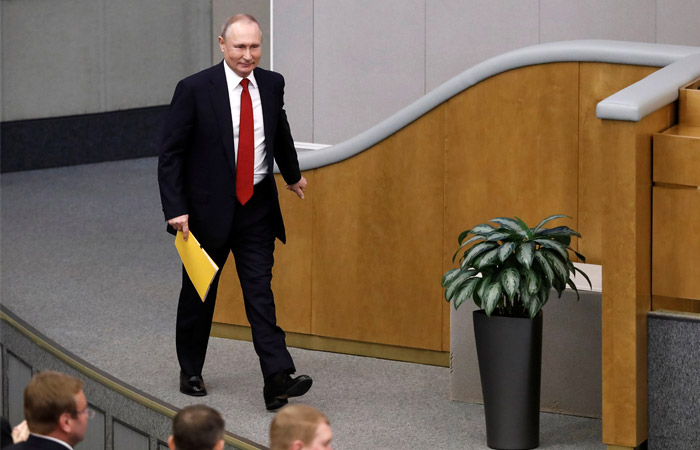 The Russian president says a suggestion by MPs that would see presidential terms reset, thus allowing him to run again in 2024, would be acceptable should it be supported by citizens and approved by the Constitutional Court.

“I believe and am deeply convinced that a strong presidential power is absolutely necessary for our country,” Putin stated in his address to the State Duma. However, the public should have guarantees that elections – including presidential elections – are competitive and there is also “an alternative.”

Putin was referring to a suggestion by Valentina Tereshkova, a United Russia MP famous for being the first woman in space, to alter a proposed amendment limiting future presidents to only two terms. Backing up her proposal, she mentioned some “unpredictable risks” to the country, meaning that “reliable insurance”.

Aside from that, Tereshkova suggested that Putin’s tenure be reset, making Putin eligible for two more runs before he would be subject to the new restrictions.

While respecting the two-term limitation, the proposal still enables a person who has served and (or) serves as president of Russia at the time this amendment entered into force “to participate as a candidate in the [next] presidential election.”

Touching on that, Putin said accepting such an initiative is an option – but under certain conditions. It could become real “only if citizens support such a proposal” in the upcoming national vote on April 22, the president opined.

You and I are accepting amendments to the Constitution not for a year, not for two, and not for ten, but for at least 30 or 50 years. And society should have guarantees that they will be provided with a regular change of power.

Then, Russia’s Constitutional Court would give an official conclusion that such an amendment will not run contrary to “the principles and fundamental provisions of the basic law. Finishing, Putin said he is confident that presidential power will eventually become less personified, it will not be “associated with any specific person.”