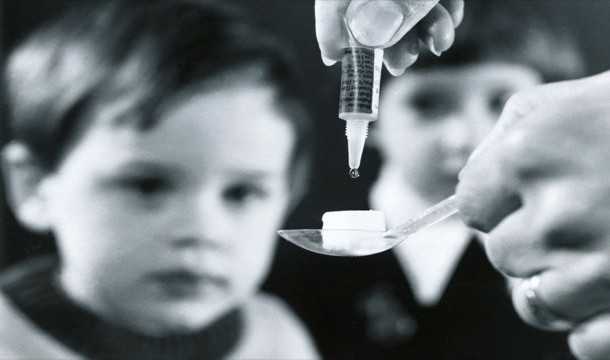 A mystery with enormous implications has stumped some of the smartest minds in cancer research. How, might a cancer-causing monkey virus, wind up in human tumors? The mystery began in 1988 with Dr. Michael Carbone. He found the SV40 virus in 60% of the human lung tumors he was studying, (SV40 stands for Simian Virus the 40th virus found). Eventually, sixty different labs confirmed the results. THE ATLANTIC.COM ARTICLE Riveting

Any scientific dispute about the presence of SV40 in the original Polio vaccine and in all sorts of cancers today has been settled: Excerpt from The Atlantic: To settle the issue Carbone sought to examine old vaccine stocks. He was told by government and drug-company officials that they had thrown out all the old lots. Then, two years ago, Carbone found an elderly Chicago-area physician who had an unopened case of polio vaccine from 1955, which he had stored in his refrigerator for more than forty years. “I would have gone all the way to Alaska to find this stuff, and here it was three miles away,” Carbone says. Last summer Carbone finally completed tests on the vintage vaccine. He found that the tiny vials contained SV40 genetically identical to the strains found in human bone and brain tumors and in monkeys. “This proves that the SV40 that was present in the polio vaccine is identical to the SV40 we are finding in these human tumors,” he says.

“The CDC has quickly removed a page from their website, which WAS cached here (since removed by google so you can view an image of the cache here), admitting that more than 98 million Americans received one or more doses of polio vaccine within an 8-year span from 1955-1963 when a proportion of the vaccine was contaminated with a cancer causing polyomavirus called SV40. It has been estimated that 10-30 million Americans could have received an SV40 contaminated dose of the vaccine.- read more.

Here is a link to the cached CDC page

Dr.Tent tells the story of how the Cancer Epidemic that we see today started and the conspiracy that took place between Lee Harvey Oswald, Judyth Baker and the polio/cancer epidemic. Comment: Excellent ’til about 60 minutes
INTERVIEW WITH JUDYTH BAKER- RIVETING

Me & Lee: How I Came to Know, Love and Lose Lee Harvey Oswald [Paperback]
Book Description
Publication Date: October 22, 2011
A young scientist, Judyth Vary Baker, suddenly finds herself immersed in a life of espionage in New Orleans, involving two plots: the attempted assassination of Fidel Castro, and the successful assassination of President John F. Kennedy. At the heart of the plots is the mysterious Lee Harvey Oswald, who quickly wins Judyth’s affection and love. In this true-life story, Judyth offers documentation on page after page: how she came to be a cancer expert at such a young age, how her relocation to New Orleans was engineered to involve her in the get-Castro plot, how she was manipulated to help develop a biological weapon to eliminate Castro, and how Oswald came to confide in her. Judyth’s narrative connects the dots to heretofore shadowy and hidden events in New Orleans and Dallas involving Oswald. She reveals how Oswald, ordered to hand off the biological weapon to a contact in Mexico City, found himself betrayed there. His eyes now opened, the future Patsy went on to sacrifice his life through his efforts to save Kennedy, as well as to protect those he loved from certain death. Judyth, who knew of Kennedy’s impending assassination through conversations with Oswald occurring less than two days before Kennedy was shot in Dealey Plaza, confirms that Oswald was a deep-cover intelligence agent who was framed for an assassination he was actually trying to prevent. Over 600 pages, filled with new photos and rare documents.–

Dr. Hillman, Merck scientists, admits that the SV40 virus was in the polio vaccine (oops)