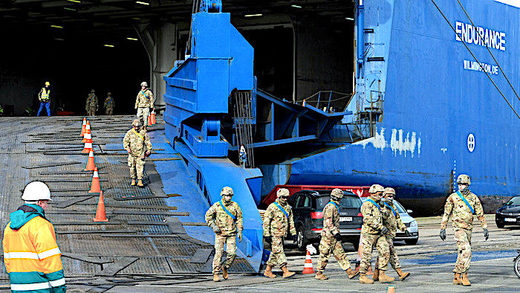 The Alliance has been preparing to stage its biggest military exercise in decades when it encountered a foe it was not apparently ready to face — the coronavirus. Now, the drill is at risk, while its true aim comes to the fore.

A large-scale exercise with a pompous name ‘Defender Europe 2020’ was expected to become the biggest one for the Alliance in a quarter of a century. Up to 20,000 US troops together with some 17,000 more soldiers from 17 other NATO members were scheduled to take part in the drill, which was about to be held [in] .

Staged mainly between April and May, this training designed to supposedly promote peace through deterrence and practicing to counter a hypothetical military aggression was aimed at demonstrating the Europeans that the Alliance is there to protect them against any threat – particularly if one imagines, let’s say, Russia to be the one.

Yet, instead, the would-be brave defenders of the Old Continent — together with the Europeans themselves — faced a threat of another nature, the one, which they probably were not ready to deal with. The deadly novel coronavirus officially known as Covid-19 has gripped many European nations, prompting the World Health Organization to declare it the new center of a pandemic.

Now, the drills’ plan is cracking at the seams and it is increasingly unclear if the large-scale war games will take place at all. The US European Command already said earlier this week it would scale down America’s participation in the exercise and modify it accordingly. The news comes on the heels of another drill cancellation, with Norway calling off another NATO exercise, all because of the fears of coronavirus.

So what does this whole situation tells us about the Alliance’s capabilities … and goals?

Let’s be clear: NATO has not yet cancelled Defender Europe 2020. Nor has the US pulled out from the event, for now at least. Yet, this might well happen, analysts and former military officials told RT. “I would not be surprised if those exercises are postponed for several months,” former Pentagon official Michael Maloof said, while a retired US Air Force Lieutenant Colonel Karen Kwiatkowski believed the drills could be either delayed or even cancelled altogether.

And the western nations might have good reasons for such a move, since, according to Kwiatkowski, soldiers might be needed at home, where they could help with cordoning of large quarantine areas or implementing martial law and controlling domestic population movements as part of a state of emergency.

If the situation with the deadly disease that already claimed thousands of lives across the world and infected over 140,000 people globally worsens, the authorities might need the Army to contain social tensions as well, the retired lieutenant colonel believes.

“Governments have fallen and collapsed on far less that what this pandemic has already delivered. And that fear is very likely the primary fear of governments, including the US government, and why no one wants their national troops in an overseas exercise at this time.”

Apart from that, soldiers returning from overseas drills could themselves be a health risk, particularly if they come back from epidemic-stricken areas.

“What we are trying to do is to keep everybody frozen to a place so we will try to keep rotations to a minimum. That is another reason why you are going to see minimal exercises, because all this moving people around will have a potential of spreading the virus,”

Maloof explains, adding that if any US personnel were sent to Europe for an exercise, they would have to “go through mandatory two weeks” of quarantine.

Another problem might well be that the NATO armies might turn out to be not quite prepared to fight even a simulated fight in the face of a very real risk — both in terms of equipment and psychology.

The US troops “do receive training in biological warfare and have equipment for that,” Maloof said, admitting, however, that he is not sure if “this equipment is sufficient to fight coronavirus in a battlefield environment” simply because Covid-19 is something the US military have never dealt with before.

The panic gripping ordinary citizens when they hear the news about the disease constantly conquering new grounds might turn out to be affecting the soldiers as well, Kwiatkowski notes.

“Being prepared for battlefield toxins isn’t the same as being prepared as a soldier for something that is already behind enemy lines, and is even in your own home town… the fear factor is real, perhaps more than the fear that is part of the life of combat troops.”

Another thing is that any drills of this scale are likely to involve a lot of meeting and talking and hand-shaking on part of the NATO’s top brass, who are arguably often in their twilight years. That means they would potentially expose themselves to a risk of infection — and that is probably something they would very much like to avoid, Sergey Mikhailov, a senior fellow at the Russian Institute for Strategic Studies (RISI) believes.

“They could very well call off the drills if they consider an information about the risk of infection for all command staff members in Europe real,” he told RT.

“In our modern peaceful times, an idea of deliberately putting soldiers’ health and even lives at risk would hardly be welcomed. The public both in the West and in the East would hardly understand and accept it.”

The military analyst said that Washington and its allies would be extremely reluctant to take such a risk since they have to consider electoral implications and public sentiments, which become all the more important ahead of the US presidential elections in particular.

Besides, taking image risks over an event that was largely designed as nothing other than one giant PR stunt in the first place would defeat its purpose, Mikhailov believes. That is not to mention that the drills would likely fail to reach its true goal, which is arguably to remind the world (and the western public) about the might and importance of the Alliance, now as the world is preoccupied with the coronavirus concerns anyway.

“Such an event should instill confidence in allies and put pressure on adversaries,” he explained, adding that now both NATO’s allies and potential adversaries are too busy fighting the pandemic. Maloof also believes a global epidemic is a bad time to demonstrate one’s strength or superiority.

“Coronavirus is a global problem. People have other things on their minds like survival and food. Whole countries are shutting down and going into isolation mode… it is what catches the attention of the people, it is not the military doing or not doing exercises.”