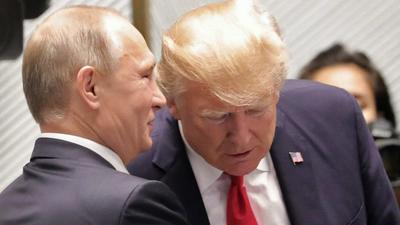 WTI prices are back above $20.00 (barely) but remain notably down on the day after reports that Presidents Trump and Putin spoke on the phone today – with the Kremlin making clear that the call was at the request of the US president.

Per the Kremlin, the heads of state “expressed serious concern over the scale of the spread of coronavirus in the world and informed each other about measures taken in Russia and the United States to counter this threat. The possibilities of closer interaction between the two countries in this direction were discussed.”

The two leaders reportedly agreed to continue personal contacts (which we are sure will trigger the liberal media) and to work towards closer COVID-19 response coordination.

Additionally, the two “exchanged views on the current state of the world oil market” and agreed on further Russian-American consultations on this subject at the ministerial level.

How long before a transcript of the call is ‘demanded’ by Nadler and Schiff, we wonder?

Markets did not react much to the news which follows Trump’s earlier comments that Saudi Arabia and Russia “both went crazy” in their oil-price war.

Additionally, Trump said in an interview with Fox News Channel before the call with Putin:

“I never thought I’d be saying that maybe we have to have an oil (price) increase, because we do… The price is so low now they’re fighting like crazy over, over distribution and over how many barrels to let go.”

Though pump prices have yet to see the benefits…