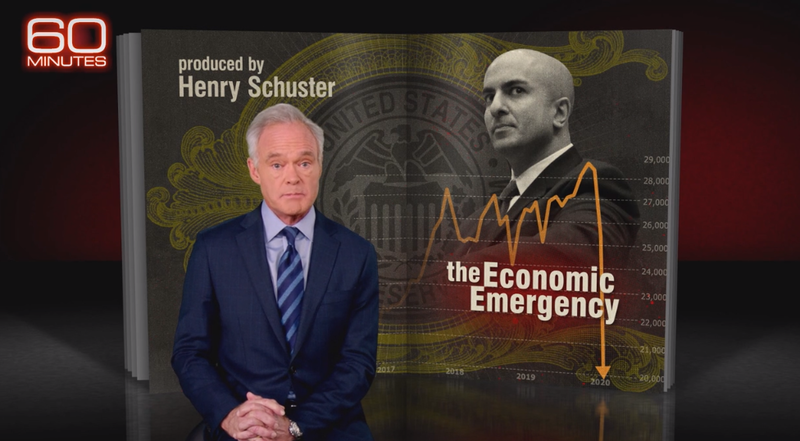 Either Neel Kashkari is long physical gold, or central bankers – those “magic people” in the words of Vitas Vasiliauskas – are intent on taking the world down with them instead of admitting they have inflated the biggest bubble ever and that the next inevitable step is fiat currency collapse.

Kashkari, who is part of a growing group of Monday morning quarterbacks who didn’t predict the financial impact of coronavirus until about 10 minutes ago, and who is best known for coming up with the TARP bailout amount during the first bailout yet has somehow managed to fail up all the way to being mentioned as Powell’s imminent replacement, added the certainty that only a Fed governor could add to the situation on 60 Minutes Sunday night.

“Are we in a recession?- he’s asked to start the interview. “If we’re not right now, we will be soon. My base case scenario is we’ll at least have a mild recession like after 9/11. The worst case would be we’d have a deep recession like the 2008 financial crisis, we just don’t know right now.” Kashkari says. “Nobody knows how the virus is going to progress,” he continued, scapegoating the medical community and laying the blame on the bursting of the biggest asset bubble on a virus.

Then, the peculiar topic of cash came up, at which point Kashkari shared an interesting anecdote.

“I heard from a bank in our region, a well-to-do customer came in and said ‘I want to withdraw $600,000 in cash.’ Now, we can supply all the cash that the banks need to meet their customer’s concerns. But it just speaks to the fear and the uncertainty that’s rippling through the economy,” he says.

When asked if the Fed will just “literally print money,” Kashkari admits: “That’s literally what congress has told us to do. That’s the authority they have given us, to print money and provide liquidity into the financial system. We create it electronically and we can also print it, with the Treasury Department, so you can get money out of your ATMs.”

He was then asked about the bond market stress. “People are shunning US Treasury Bonds, which are always thought to be the safest possible investment,” the host says, very matter-of-factly.

Kashkari responds: “Keep in mind, treasury bond prices are still very high relative to history. They’re just not quite as high as they were a couple weeks ago. So they’re still viewed as a very safe investment. But this fear of where the virus is going to go is leading people to say ‘I just want cash’.”

Or, to loosely paraphrase Ray Dalio, in times of stress Treasuries are trash?

Again, matter-of-factly, the host asks: “Can you characterize everything the Fed has done this past week as essentially flooding the system with money? To which Kashkari responds simply: “Yes.”

The host says “And there’s no end to your ability to do that?”

“There’s no end to our ability to do that.” He later added: “We’re far from out of ammunition…your ATM is safe, your banks are safe. There’s an infinite amount of cash at the Federal Reserve.”

Kashkari was greeted with a warm response on social media:

Yeah, and they burned infinite cash in fireplaces during the Weimar Republic because they made wood into sawdust to make bread. Neel sounds like an out of touch bubblehead.

Soon, how many wheelbarrows of cash will it take to buy a roll of toilet paper? #Hyperinflation

People laugh & ridicule me when I explain why I own gold. Meanwhile this guy gets center stage, prime time, CBS Sunday night: https://t.co/blm0rgYG1Z

You can watch Kashkari’s full interview here. Although we’re not sure why you would: