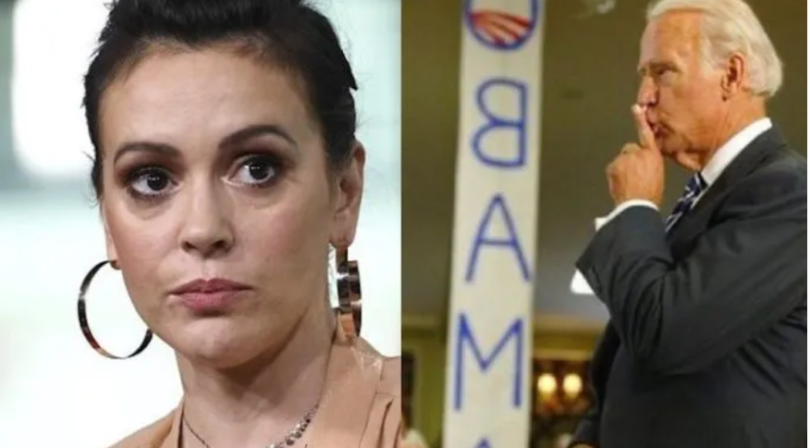 A couple of years ago Alyssa Milano said, “You can’t pretend to be the party of the American people and then not support a woman who comes forward with her #MeToo story.” Now she’s refusing to support a woman who has accused her “friend” Joe Biden of sexual assault.

Milano, who has been vocal about her support for Biden during the Democrat primaries, is widely regarded as the instigator of the MeToo movement, after encouraging “all the women who have been sexually harassed or assaulted wrote ‘me too’ as a status” on Twitter in 2017.

Milano also attended the Senate hearing on Supreme Court nominee Brett Kavanaugh in support of his accuser Christine Blasey Ford. She said she opposed Kavanaugh’s nomination because of unsubstantiated accusations that he sexually assaulted Ford in high school. She even live-tweeted from inside the proceeding, letting her three million-plus followers know: “I believe Dr. Christine Blasey Ford.“

According to Milano in 2018, “You can’t pretend to be the party of the American people and then not support a woman who comes forward with her #MeToo story.”

But refusing to support a woman who has come forward with her #MeToo story is exactly what Milano is now doing. It seems #MeToo allegations can be conveniently dismissed by liberals if the target of the allegation is a Democrat.

Fast forward to 2020 and Milano is being slammed as a hypocrite on social media for refusing to support Biden’s former Senate aide and #MeToo accuser Tara Reade.

Reade came forward this week with graphic details alleging that she was attacked and sexually violated by Biden when she worked for him in 1993.

Reade made the allegation against Biden during an interview with journalist Katie Harper, who published an audio clip of the conversation on Wednesday.

Of course mainstream media has remained silent regarding the accusations, failing to report on the story. Yahoo News broke rank with the rest of the media and published a report, however the link was quickly removed and the story was moved to the Sports section of the website.

Ms. Reade says Biden sexually assaulted her after she was instructed to deliver a gym bag to then-Delaware Senator. After giving him the bag, Reade claims he greeted her by name before forcing her into a “side area”, pinning her against the wall, and proceeding to sexually assault her.

“We were alone, and it was the strangest thing. There was no, like, exchange really, he just had me up against the wall,” said Reade.

She continues by revealing graphic details of the alleged sexual assault.

“His hands were on me, and underneath my clothes,” Reade says later in the interview.

“He went down my skirt, but then up inside. He penetrated me with his fingers.”

Reade alleges that Biden was kissing her and asking her if she “wanted to go somewhere else.”

She says that after she refused, Biden said, “C’mon man, I heard you liked me.”

Reade told Harper that Biden’s alleged phrase stuck with her because it made her think about what she “might have said.”

“For me, it was like everything shattered in that moment because I knew that we were alone. It was over, right?

“He wasn’t trying to do anything more – but I looked up to him, he was like my father’s age, he was like this champion of women’s rights in my eyes and I couldn’t believe it was happening.

“It seemed surreal. I just felt sick because when he pulled back, he looked annoyed, and he said something else to me that I don’t want to say, and then he said – I must have looked shocked …

Reade recalls how she was later “shaking” in a stairwell and “trying to grasp what had just happened and what I should do or what I should say.”

Milano is considered the creator of the #MeToo movement, with many people citing her October 2017 tweet as the birth of the movement.

If you’ve been sexually harassed or assaulted write ‘me too’ as a reply to this tweet. pic.twitter.com/k2oeCiUf9n

Earlier this month, Milano also used Twitter to endorse Joe Biden’s presidential bid, sharing photos of her with the former vice president, and adding “I refuse to underestimate the power of intelligence, kindness and decency.”

I refuse to underestimate the power of intelligence, kindness and decency.

My friend, @JoeBiden has all of that and so much more.

Joe already has the respect of world leaders. He has the experience to effectively lead on day one.

Milano has refused to respond or comment on the allegations against her “friend” Biden.

The former Charmed actress has remained active on social media, however. On Thursday night, after the allegations had emerged and critics were highlighting her silence, Milano retweeted a post from Biden.