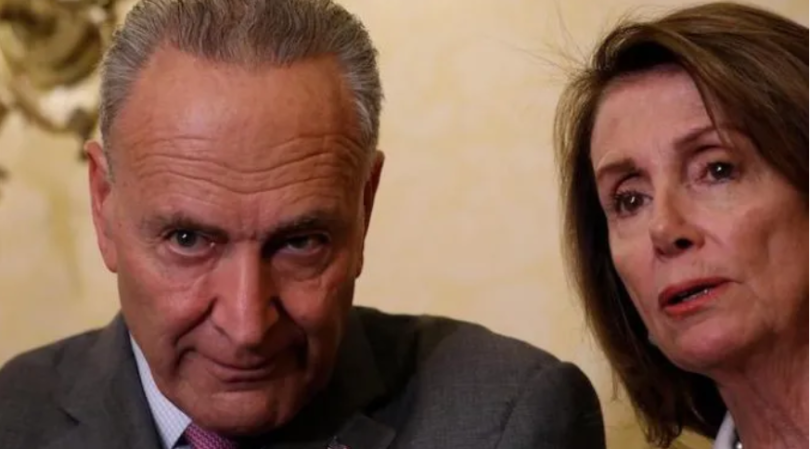 How did House Speaker Nancy Pelosi, Senate Minority Leader Charles Schumer and the Democrats come up with a highly-detailed 1,119-page COVID-19 relief bill — packed with radical far-left “poison pills” — in the space of a single weekend?

Let’s face it, they didn’t. What they did was take a bunch of far-left Democratic plans that they understood they would never be able to pass under normal circumstances, and throw them into an emergency bill one Republican senator  as a “Disney World wish list.”

Pelosi's #COVID19 bill is 1,119 pages and contains provisions for "conducting risk-limiting audits of results of elections" so yeah it's really very focused on the crisis at hand.🤦🏻‍♀️ pic.twitter.com/Q6axBi14lZ

WesternJournal report: Pelosi’s bill didn’t contain just that; it was a veritable cornucopia of stuff the Democrats have been looking to implement for a while that had nothing to do with fighting the coronavirus threat or helping America recover economically from it.

At least one Twitter user — author and writer Brian Cates — noted emphatically that this had very little to do with the problem at hand:

And it's one long Leftist Progressive wishlist.

There is NO WAY they threw this together over a weekend.

Pelosi & Schumer must have PLANNED this bait and switch for over a week.https://t.co/mcJxNSEqhV

In fact, the third-ranked House Democrat reportedly more or less admitted this on a call with the Democratic caucus.

House Majority Whip James Clyburn told his colleagues the bill was “a tremendous opportunity to restructure things to fit our vision,” according to The Hill.

At least he didn’t try to hide it.

The bill would eliminate “a minimum of $10,000 of federal and private student loan debt for each indebted borrower.”

No, it’s not what Elizabeth Warren called for during her presidential campaign, but it certainly sounded like something that had its genesis more in dogma than in the vein of economic recovery.

Apparently, they’re admitting their own voters can’t get their stuff together enough to register before Election Day. There’s no evidence that this will be necessary given the exigencies created by coronavirus, but it’s certainly convenient.

So, too, is the legislative command that forbids states from “imposing additional conditions or requirements on the eligibility of a voter to cast an absentee ballot such as notarization or witness signatures, and prohibits requiring identification to obtain an absentee ballot.”

Furthermore, companies that accept federal assistance must give their employees a $15-per-hour minimum wage.

Want to kill off small businesses that are asking for government assistance? That’s a perfectly acceptable way to do it.

But hey, it’s essentially a backdoor way to force American small businesses to sign onto the liberal agenda. Who cares about helping these businesses out? They’re not suffering right now. This isn’t a recovery bill or … oh, wait, no, that’s totally what it is and this is tone-deaf and brain-dead.

Environmentalist clap-trap? Yeah, it’s in there, too.

Airlines which accept government money must “offset their carbon emissions and reduce their overall emissions by 50 percent by 2050,” according to the bill.

Airports are also incentivized to trade in old equipment via a “cash for clunkers” program.

Companies which receive benefits must disclose diversity stats, including the “number and dollar value invested with minority-and-women owned suppliers … including professional services (legal and consulting) and asset managers, and deposits and other accounts with minority depository institutions, as compared to all vendor investments.”

Airlines which receive aid must have a union representative on their board.

The Obamaphone program would receive a new infusion of cash.

The plan expands a bill that allows for a “pension funding relief for a number of community newspaper plan sponsors.”

Oh, and there’s also $35 million in there for the Kennedy Center, because what the heck?

All of this came as Republicans and Democrats in the Senate had been hammering out a deal:

Pelosi waltzes in after the House has been on a week long vacation and says they’re going to do their own thing and the Senate’s Monday urgency is arbitrary.

This wasn’t a random thing. It couldn’t have been.

You don’t put together an 1,119-page bill in a weekend — unless, of course, this was just a wish list that had been sitting, in various parts, on the shelf before this.

Even then, it doesn’t just get put together in two days. It’s not an iffy paper about two philosophers with pro wrestling thrown in.

It’s nothing that simple — not in Washington, where something like this reeks of malice and forethought.

As I write this, legislators are trying to hash out a deal. One prays they will, and fast.

However, this should be about recovering from the economic damage COVID-19 hath wrought. This isn’t the time to start remaking America.

Pelosi and the Democrats apparently lack shame, especially at a moment when the economy desperately needs Republicans and Democrats to come together on a sensible recovery bill.

They also lack the ability to realize when people are going to see through piffle. Nobody can look at this bill and reasonably conclude this was something put together in a weekend.

Yet, Pelosi had the shamelessness to warn Republicans on Tuesday not to put “poison pills” in a recovery bill.

“I think there is real optimism that we could get something done in the next few hours,” she said in an interview with CNBC.

“If it has poison pills in it — and they know certain things are poison pills — then they don’t want unanimous consent, they just want an ideological statement.”

I don’t know if that’s straight-up gangsta or just an utter lack of self-awareness.

Either way, this is an unserious response to the most serious crisis our nation’s faced since the 2008 economic collapse.

Instead of trying to prevent another economic collapse, Pelosi and the Democrats put forth legislation that was basically a poison-pill cookie.

Voters ought to be reminded of her last-minute wish list come this November.