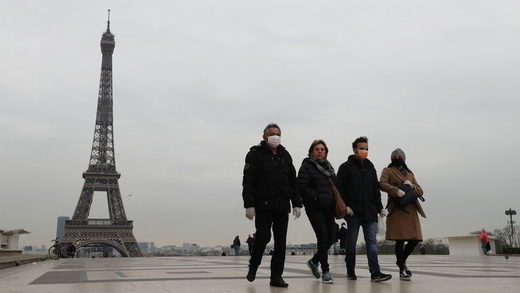 The French government said on Tuesday it is ready to use all measures necessary to support big companies suffering during the current global market turmoil caused by the Covid-19 pandemic.

“I won’t hesitate to use all means available to protect big French companies,” Finance Minister Bruno Le Maire said on a call with journalists, adding: “That can be done by recapitalisation, that can be done by taking a stake, I can even use the term nationalisation if necessary.”

According to the Financial Times citing Le Maire, Paris has also promised a package of measures worth €45 billion (US$49.8bn) to help companies and employees withstand the pandemic-linked storm. The package will include payments to temporarily redundant workers and postponed tax and social security bills.

The aid measures also include €300 billion of state guarantees for bank loans to businesses and €1 trillion of such guarantees from European institutions, Le Maire said.

The Financial Markets Authority (AMF), along with regulators in Italy and Belgium, has banned short selling in some stocks for Tuesday’s session in order to curtail the plunge in equity markets. AMF has halted trades in 92 such stocks for 24 hours.

On Monday, French President Emmanuel Macron ordered a stricter lockdown across the entire country, which has the seventh-highest number of confirmed Covid-19 cases after China, Italy, Iran, Spain, South Korea, and Germany.

The airline industry is in crisis because of the coronavirus pandemic. The Italian government announced on Tuesday it plans to re-nationalize the bankrupt Alitalia airline under an emergency economic rescue plan.

Three of the biggest international airline alliances are calling for government support and US carriers are asking for more than $50 billion in assistance, as the industry faces “unprecedented challenges” over the Covid-19 outbreak.

The pandemic has hit the aviation industry hard, as it has forced governments to impose travel bans and close borders. While the crisis does not seem to have an “end in sight,” Airlines for America – the trade group involving American Airlines, United Airlines, Delta Air Lines and Southwest Airlines, among others – said that it needs $29 billion in grants and $29 billion in loans or loan guarantees, in addition to massive tax relief, to stay afloat.

The group explained that action is necessary to save the US airlines’ 750,000 employees, as well the 10 million jobs supported by the airline industry. It also warned that the situation is only getting worse “by the day,” with cancellations already outpacing new bookings in the US.

“This is a today problem, not a tomorrow problem. It requires urgent action,” Airlines for America President and CEO Nicholas E. Calio said in a statement on Monday.

At the same time, Oneworld, SkyTeam and Star Alliance – which represent around 60 airlines and account for more than half of global airline capacity – warned that the world should brace for the wide-scale economic impact of the virus and the measures taken to contain it.

“The three alliances urge governments worldwide to prepare for the broad economic effects from actions taken by states to contain the spread of Covid-19, and to evaluate all possible means to assist the airline industry during this unprecedented period,” the joint statement reads.

Despite the promise by US President Donald Trump to support the crisis-hit industry, major US carriers had already slashed both international and domestic flights. The deepest cuts were announced by Delta Air Lines, which had to reduce its capacity in the next few months by 40 percent.

European carriers were also forced to cut flight capacity due to the crisis. International Airlines Group (IAG), owners of British Airways, Iberia, and Vueling, among other subsidiaries, decided to cut capacity by 75 percent for April and May as it expects demand to remain weak due to the pandemic. Germany’s Lufthansa revealed plans to cut long-haul capacity by up to 90 percent starting from Tuesday, while its subsidiary Austrian Airlines has ceased services completely until at least March 28.