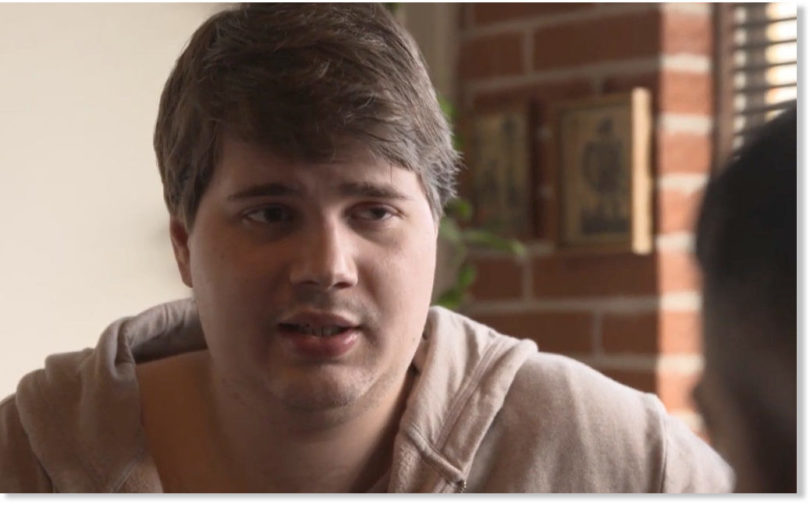 Dutch reporter Danny Ghosen conducted an interview with pedophile and ‘pedoactivist’ Nelson Maatman who was planning to establish a political party in order to legalize sexual abuse of children. The political party he wanted to create was to be titled ‘the party for family, love, freedom and diversity’, with its main aim to overthrow laws that prohibit sex with children, claiming he wants to “make the world a better place”. Nelson says he’s sexually attracted to young boys between the age of 4 to 14, and also wants to give rights to children, allowing them to decide what happens to their bodies:

– : What would you specifically like to change with your political party?
Pedophile Nelson: I want everyone in the Netherlands to be equal. That free speech is once again respected and that children also get rights and are no longer treated as second-class citizens. And that they also get things like voting rights, for example.
Ghosen: And what else? Because I guess that’s not the only thing?
Pedophile Nelson: No. Of course, we also want everyone to be able to decide what happens to their bodies, including children yes.
Ghosen: So, you want to walk up to a 2 or 3-year-old child and ask “do you want to have sex?” – but a 2 or 3-year-old can’t decide that, they’re not fully developed. How do you see this, explain it to me.
Pedophile Nelson: If a 2 or 3-year-old child hasn’t developed enough, then why are they capable of answering questions such as “do you want an ice cream” or “do you want to go to the playground”?
Ghosen: But you can’t compare those two things,
Pedophile Nelson: I think you can. I think those things are very easy to compare.

It is absolutely sickening.

In the video, you can also see Ghosen and Nelson standing near the University of Amsterdam where Nelson is going to give a lecture about pedophilia and freedom of speech in the Netherlands. He told Ghosen that he expects around 50 students to attend his lecture, and that he has given frequent lectures at the university on this topic.

Shortly after this interview aired, the University of Amsterdam apologized for inviting him to speak, claiming that they were “insufficiently aware of his activist attitude and statements and would certainly not have invited him if that had been known”. They added: “It goes without saying that we strongly disapprove of pedosexuality. Sex with children cannot be justified under any circumstances or circumstances.”

Why then invite a pedophile to the university?!

If this interview was never aired, people would not have known and this pedophile would have continued his agenda to normalize pedophilia. However, he is not the only pedophile that is giving lectures at universities and schools. The agenda of pushing the idea to students that pedophilia is not ‘necessarily’ dangerous to society, and that only a small percentage of pedophiles sexually abuse children, sadly continues, while child pornography continues to be distributed and produced in the Netherlands.

Many Dutch citizens reacted with shock and anger after seeing the interview. Others started researching more about Nelson and found a disturbing tweet by him (see below). The following Twitter user, Cuyahoga, writes: “[The tweet below is from] Nelson Maatman when (according to him) a 5-year-old friend was staying at his place. I think that making somebody’s home address public goes a bit far, but if I had children going to primary school de Vuurtoren in the Dutch city of Lelystad, I would want to know that that monster is living nearby.”

Nelson was arrested not too long after the interview, as the police found child pornography on his computer. In the interview, however, he claimed that he follows the law:

Ghosen: Are you dangerous Nelson? Should people be afraid of you?
Pedophile Nelson: No, people don’t have to be afraid of me and especially parents… well… maybe parents should, but children definitely don’t have to be afraid of me. I adhere to the law. I want to change the law. I want that society improves and becomes more safe. And regarding that, I’m mostly worried about those parents who can only react with aggression.
Ghosen: But you’re also someone who wants to have sex with a child and many parents see such a person as dangerous.
Pedophile Nelson: Then I wonder why they see that as dangerous, because…
Ghosen: Because that’s traumatizing for the child.
Pedophile Nelson: In the case of abuse I get it, but that has nothing to do with me.
Ghosen: So, when you have sex with a child, the child would feel better afterwards? You think that he wouldn’t be traumatized?
Pedophile Nelson: He wouldn’t be traumatized, because I act based on the best interest of the child.
Ghosen: Or do you act based on your lust?
Pedophile Nelson: There is no personal interest.
Ghosen: Well, there definitely is, because you want to have sex with children and you want to legalize it so that you can do that. That’s the number 1 interest, isn’t it?
Pedophile Nelson: No, I want to legalize it to make the world a better place.

Three other men, who wanted to join his political party were also arrested for possession of child pornography. Pedophiles claiming they are not a danger to children or society, that they act based on the best interest of the child, are obviously not to be trusted.

After the interview gained popularity, pedophiles reacted by saying that not all pedophiles share the same thoughts. One Twitter user tweeted: “There are dozens of pedophiles who want to legalize sex with children. There are thousands of pedophiles who do NOT want that. By paying particular attention to the first group, it seems as if they are speaking on behalf of all pedophiles. That is not the case.” Another (pro-pedophilia) Twitter user included an article about a lesbian who so ‘bravely’ and ‘openly’ shared her thoughts and feelings for very young boys. Both Twitter users are trying to elicit pity for pedophiles.

It is under the guise of ‘diversity’ that we see the push for an agenda to normalize and eventually legalize pedophilia, and we can only hope that the majority of people will never allow this to happen.