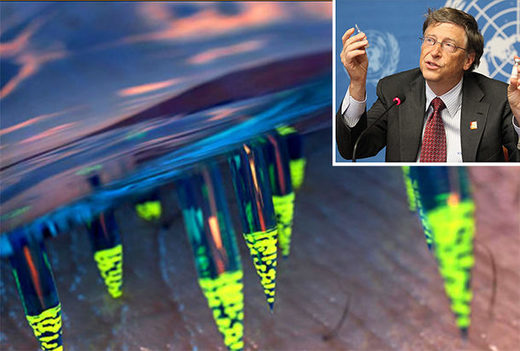 In an article published in Scientific America on December 18, 2019, titled Invisible Ink Could Reveal whether Kids Have Been Vaccinated, the author, Karen Weintraub, states that in the not too distant future vaccinations will be accompanied with an invisible ink tattoo:

Along with the vaccine, a child would be injected with a bit of dye that is invisible to the naked eye but easily seen with a special cell-phone filter, combined with an app that shines near-infrared light onto the skin.

The dye would be expected to last up to five years, according to tests on pig and rat skin and human skin in a dish. The system — which has not yet been tested in children — would provide quick and easy access to vaccination history, avoid the risk of clerical errors, and add little to the cost or risk of the procedure, according to the study.”

Shockingly, in the wake of the COVID-19 outbreak, Denmark have already introduced mandatory vaccinations, and the UK is considering following suit.

Laura Donnelly writes in the Telegraph:

England “might well end up with mandatory” vaccines, the outgoing Chief Medical Officer has said, as she recalled looking after two children who died from measles.

Professor Dame Sally Davies said she hoped other measures could be tried first to stem falling immunisation rates, but that it was vital to stop the spread of deadly diseases. Her comments come after some health experts condemned Health Secretary Matt Hancock for saying he is seriously considering mandatory vaccination.

Dame Sally told BBC Radio 4’s Today programme that “we need to up our vaccination rates. I hope we can do it by other means, but if we can’t, we might well end up with mandatory.”

Isn’t it strange how just a few months after this ‘invisible ink tattoo’ was perfected we face a global pandemic, martial law, and mandatory vaccines…

“Shut up and pay your taxes.”