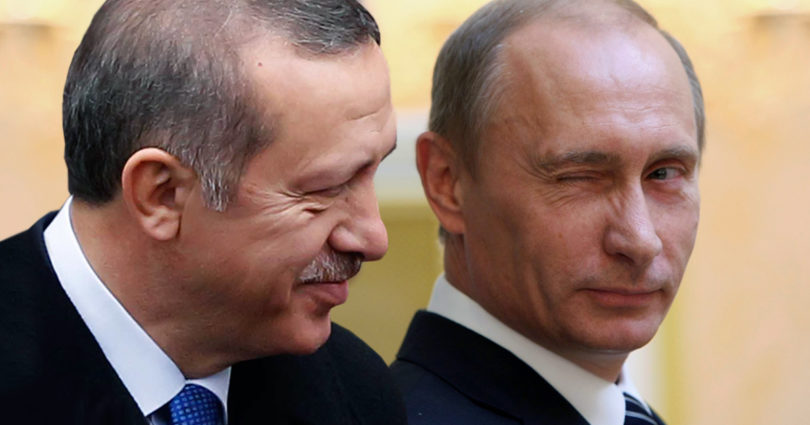 In a political match-up between Vladimir Putin and the best computer, I would put all my marbles on Vlad. Not only is he the human reincarnation of the Russian total independence and autonomy ideology, but he’s as cunning and clever as a fox and understands the gears of the world like no one else. Like all chess grand masters, he’s so many moves ahead that he uses the board to set-up traps, where his rooks and horses will take out the Queen and King as if they were simple pawns. For Vlad isn’t facing a computer, but a most faulty opponent that’s been inbreeding for 250 years, called the New World Order.

Syria is lucky to have the best politician in human history by its side.

As I’m writing this on February 23rd 2020, the Syrian army, backed by an intense Russian air support, is closing in on the Idlib governorate where the Turkish army is stuck with a horde of fake terrorist/real proxy groups that bare a hundred poetic names like Hayat Tahrir al-Sham, the al-Nusra National Liberation Front, Hurras al-Din and the Chinese Uighur-stuffed Turkistan Islamic Party. All of the above were recruited around the world by the Muslim Brotherhood at the request of NATO, as the CIA was launching its Arab Spring operation in 2011. It isn’t a secret to anyone that the Turkish President Recep Tayyip Erdoğan is a member of the Muslim Brotherhood, and is a former pupil of the Turkish Islamic Necmettin Erbakan whom had been trained directly by Sheikh Hassan al-Banna, the original founder of the Muslim Brotherhood in 1928, an organization that has a history of exacting hardship on leaders and ex-members who have betrayed them.

Let’s take a look at the important timetable of the Turkish involvement in the aggression war on Syria, starting at the Russian intervention. By the way, using the chronology of factual events is a great technique to follow the behavioral changes of leaders and the evolution of their positions in geopolitics. As you will see, the chain of events speaks loudly about reality. September 2015: Russia starts bombing terrorist organizations in Syria, and vows to keep the Syrian territory together.

November 2015: Turkey downs an SU-24, followed by a heavy Russian embargo on Turkey. Time and discussions slowly appease the relationship between the two countries, as Erdogan refuses to start a war with Russia.

July 2016: The CIA uses dissident Turkish commanders for a murder attempt on Erdogan. Putin phones him and approves the ensuing massive crackdown on military commanders and the arrest of two CIA operatives in Turkey.

December 2016: A peace deal is signed between Turkey and Russia.

October 2017: Turkish forces move in on the Idlib governorate.

March 2018 to today: Terrorists are evacuated to Idlib after each Syrian operation in Ghouta, Daraa, Douma, etc.

There is one fact that all medias on both sides of the fence agree with: Vladimir Putin is a very wise and intelligent politician. So, the first question that these events should raise is «could Vlad have been dumb enough to sell his most advanced defensive system to Erdogan if he wasn’t 100% sure that S-400 would never be used against Russian planes and missiles in the Syrian operations?» Of course, we all know the logical answer to this. Even though Turkey has full control over their S-400s, some of you might think that Russians could block their use at will. Well then, just reverse the logic: would Erdogan have spent 5 billion dollars on defensive systems that he could not use against a country that he knew would soon become his foe? Of course not.

Therefore, we can conclude that what is happening today in Idlib was planned and agreed to by both Putin and Erdogan, as early as October 2017 when the Turkish army moved in Idlib to start gathering NATO’s mercenaries who were being evacuated with every joint Syrian-Russian military operation.

We have all heard and seen the pictures of tunnels dug by these mercenary organizations where they hide from Syrian and Russian bombings, using the local population as a human shield. The best way to get them out of there would be to give them tanks and armored vehicles. Well, since January 28th 2020, that’s exactly what Turkey has been doing, sending convoy after convoy of military vehicles and equipment. On January 31st, the Syrian military destroyed and seized more than 100 vehicles of the militants near Idlib. 11 tanks, 19 armored personnel carriers, 62 pickups with heavy weapons, 38 artillery pieces and 4 UAVs.  Since these numerous Turkish convoys have been sent to arm the terrorists, it seems that Syrian and Russian bombings never miss a target, destroying the vehicles as soon as mercenaries start driving them. It’s as if there were Russian GPS’s planted in their deliveries.

But why are every Syrian, Turkish and Russian official menacing each other through the media then? Why did Erdogan threaten to launch a massive Turkish attack on the Syrian army just yesterday?

The key to unlock this mystery is the very real danger that he could be considered as a traitor by the Muslim Brotherhood, since he was as much responsible for the recruiting of mercenary jihadists then, as he is of their destruction in Idlib today. For many years, the media lying game has worked really well for globalists and imperialists, therefore it’s only fair that this game would be used for a good purpose at some point. Syrian and Russian officials are playing along to help Erdogan save his brotherhood reputation, but it also has an interesting secondary effect: alternative analysts are not used to Russia and Syria lying in their official reporting, so they’re thrown-off by these misrepresentations of what they usually know to be true.

NATO, Turkey’s own club, who should jump on the occasion of the increased tensions to get some more war going, is well versed in this media game. They know exactly what’s going on. So by February 18th 2020, NATO officially said that it would not get involved in Idlib. I mean, how much more circumstantial evidence does someone need? The Brotherhood can blame Erdogan at will for their defeat, but truth of the matter is that everyone who has been funding them let them down in the end, and none of the countries where they came from want them back home.

A couple of days later, the Turkish parliament said it was now split over their involvement in Syria, and we can foresee that Erdogan won’t even have to decide himself to get the troops back home, but that it will be forced upon him by the Parliament, when Idlib has no mercenary jihadist left to drive a tank.

My interest in geopolitics ignited in September 2015, when Vlad decided to eradicate Daesch, Al-Qaeda and other terrorist groups that were trying to oust Bashar al-Assad from power, whom I thought at the time was a bloody dictator dropping chemicals and barrel-bombs on the Syrian people. Since I was starting to suspect that our Western mainstream media was lying to us, it didn’t take me very long to understand that these fake terrorist groups were in fact mercenaries, that Bashar had studied ophthalmology because he wanted to work with people instead of computers, and that real analysts with scientific minds like Theodor Postol had destroyed the myths of the chemical attacks.

At the genesis of my awakening, I was in a reading frenzy of dozens of articles written by great international alternative analysts and writers, who seem to know so much about what was really going on. With time, the more I’ve dug into my own research, especially into history, the more I realized that next to nothing in geopolitics can be analyzed properly from the first degree and unfortunately, many of these writers can’t jump past that step. Even though they all know about the pathological lying virus that’s affecting mainstream media, they all catch it again and again. They see Erdogan sending tanks into Idlib and thus conclude that Turkey is trying to revive the Ottoman Empire. They read a National Geographic article on the 6th mass extinction, and conclude that man is destroying the planet. They are told the absurdity that Trump had Soleimani killed 8 months before an election, and conclude that the US president is a globalist puppet. There you go, action-reaction, food for thought for the readers who can now raise their indignation in comment sections every Sunday morning. I love these, they’re an inexhaustible source of joy!

«Erdogan is a Western and NATO puppet!»

«Even though man is only responsible for 4,8% of all CO2, 97,7% of scientists agree that it’s the drop that spills the bucket.»

«Hitler wasn’t fighting the Rothschild since his maid was an Ashkenazi Jew and Adolf was a 33rd degree Freemason. Know your history.»

«You’ve made a spelling mistake on the word colour, which should be color, how can we take you seriousely, dude?»

You’ve also read them, I’m sure.

All geopolitics are Machiavellian by definition, and the real players look at the world as a chessboard designed to set-up traps through twisted plots that can only be analyzed at the second degree level, over the genuine long-term effects and consequences of each move. Alternative medias’ take on Trump is aligned with the mainstream narrative that the orange man is a crazy narcissist, despite all he’s really achieved so far against globalism and media lying, and against any logical analysis of why globalists and neocons are all risking their careers and reputations to impeach him on a phony basis. A few of these writers even perpetuate the scientifically absurd-to-the-core theory that man is responsible for some global warming that can’t be seen or felt anywhere on the planet! Sometimes it feels like my past geopolitical idols couldn’t analyze the reaction of a dog that hasn’t pissed for two hours and is barking at the exit door!

Oh, they mean well, and sometimes they’re spot-on when they write about subjects that they know well, but many just don’t understand the big picture of what’s really going on out there. They are lost, because they thought that only Western politicians could use media to spread fake stories and narratives, but it’s becoming overly obvious that right now Erdogan and most Russian officials are lying to their teeth about the Idlib operation, acting a suspense through medias while Idlib is a Syria-Russia-Turkey joint effort. They will all become friends again and sign a few papers for the cameras, as soon as the tunnels are emptied of the «Syrian rebels» who came from Europe, North America, Australia, China and Israel.

And alternative writers will soon say that Idlib was a close call that almost got us into WW3, like every time that someone farted in Syria.