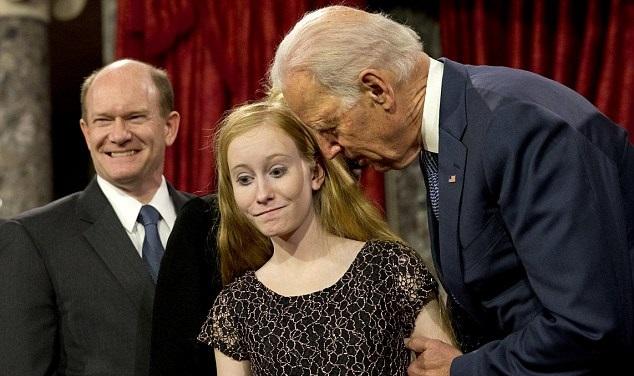 Joe Biden has been ‘credibly’ accused of sexual assault – and in a world where Democrats set the rules for these types of claims, she must be believed.

The woman, Tara Reade, accused Biden last year of inappropriate behavior when she worked in his Senate office in 1993. Now (well actually, last April), Reade says Biden touched her inappropriately when she was in her mid-20s.

“My life was hell,” said Reade. “This was about power and control. I couldn’t get a job on the Hill.”

Now, She’s given a graphic podcast interview with Rolling Stone’s Katie Halper where she tells her full story.

Reade describes a graphic incident from 1993 in which as superior asked her to run a gym bag to Biden “down towards the capital.” When Biden greeted her (not allegedly of course, since we’re believing all women), he forced her up against a wall and shoved his hands up her skirt.

Biden’s “hands were on me and underneath my clothes,” she said, after he “had me up against the wall.”

“I remember him saying first, like as he was doing it, ‘Do you want to go somewhere else,'” she said, adding “And then him saying to me when I pulled away, he got finished doing what he was doing, and I kind of just pulled back and he said, ‘Come on man, I heard you liked me.’ And that phrase stayed with me because I kept thinking what I might’ve said and I can’t remember exactly if he said ‘i thought’ or ‘I heard’ but he implied that I had done this.”

Reade then went on to say that “everything shattered in that moment” because she knew that there were no witnesses and she looked up to him. “He was like my father’s age,” she said. “He was like this champion of women’s rights in my eyes and I couldn’t believe it was happening. It seemed surreal.”

Reade then said Biden grabbed her by the shoulders and said, “You’re okay. You’re fine” and proceeded to walk away.

Reade said that Biden also told her something after the alleged assault that she initially didn’t want to share because “it’s the thing that stays in my head over and over.” But after some pressing from Halper, Reade decided to share:

“He took his finger. He just like pointed at me and said you’re nothing to me.”

Halper said she spoke with Reade’s brother and close friend, and both of them recall Reade telling them about the alleged assault at the time. –NewsOne

This is a story that @ReadeAlexandra has been trying to tell since it happened in 1993. It's a story about sexual assault, retaliation and silencing. #meToo https://t.co/yHz3iFi9a5

Reade says that after she revealed some of Biden’s inappropriate behavior, she was accused of doing the bidding of Vladimir Putin, according to The Intercept.