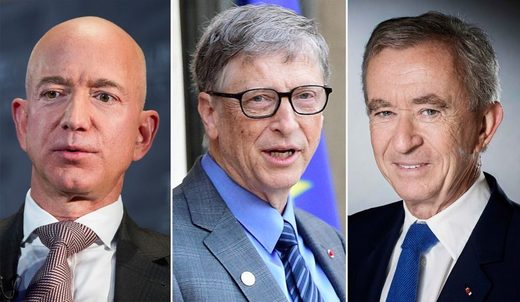 As the Dow Jones suffered its worst decline since 1987 and coronavirus fears caused markets to slide around the globe, the world’s twenty richest people lost just over $78 billion combined in a single day.

Jeff Bezos, the world’s richest person, saw his net worth drop by $8 billion, shedding more than 7% of his net worth as Amazon shares fell by nearly 8%. Close behind was Bernard Arnault, chairman and CEO of French luxury conglomerate LVMH, whose net worth declined by $7.7 billion. Arnault, the world’s third-richest person, finished the day with $82.5 billion, after shares in LVMH closed nearly 9% lower as the luxury retail industry was hit by the effect of the coronavirus on demand for luxury goods in China and Europe.

Facebook CEO Mark Zuckerberg lost $5.7 billion — 9% of his net worth — as Facebook shares plunged by more than 9%. Oracle founder Larry Ellison’s net worth fell by nearly as much, dropping by $5.6 billion as Oracle shares slumped 11%.

The billionaire losses came as the S&P 500, Nasdaq, and Dow Jones all closed more than 9% lower, driven by market fears about the growing coronavirus pandemic and its effects on the U.S. economy. President Donald Trump’s Wednesday night announcement of a ban on flights from most of Europe was followed on Thursday by a spate of cancellations, as the NCAA and major sports leagues suspended their seasons and New York City declared a state of emergency.

Since the market selloff began on Monday, Jeff Bezos has seen his net worth shrink by more than $9 billion to $104.4 billion at Thursday’s market close. That’s on top of his $14.1 billion loss last week. While LVMH’s Arnault suffered fewer losses last week — he was down $7.4 billion — his fortune has taken a $10.1 billion hit since Monday, with LVMH shares in freefall. Needless to say, buying luxury goods is not at the top of many people’s lists this week.