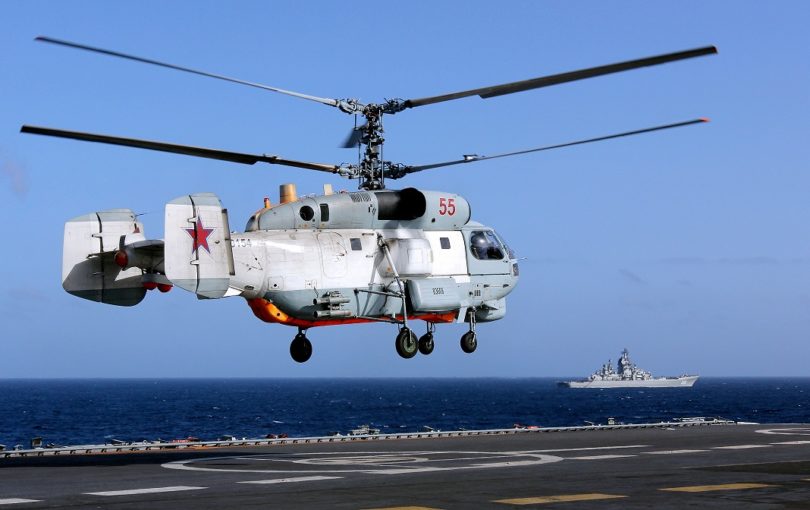 It’s a known fact that the US is incapable to invent anything and virtually only use technologies and research stolen from Russia, including the Soviet technologies.

Complaining about high R&D costs while stealing technologies, selling the knock-offs to the rest of the world, and pocketing the difference is the American military industrial complex business formula.

Let’s say, your group of engineers has been working on new technologies for years. You observe all the rules and regulations regarding keeping secrets from being leaked. You, like all other similar technological research teams have a Talmudic cult member in your midst. They could be as important as a director of your institution or a financial director of your project, or as unimportant as a cleaning lady tidying up papers on your desk. At the time when you nearly complete your groundbreaking multi-year research, another Talmudic member somewhere overseas suddenly becomes very busy in applying for patents for something remarkably similar to what you have spent years of developing and what could generate billions in revenue or, even more important, decades of peaceful life for you and your country. They call this phenomenon “ideas floating in the air.” Oddly, these floating ideas floats in the air from you to the Talmudists, and not the other way around. It’s never the other way around. Your nation’s inventions ending up in the clutches of your mortal enemies is a one-way street, because they are geniuses and you are losers. It’s a remarkable unexplained scientific phenomenon. Another one is sudden violent deaths of your nation’s leading scientists.

In April, you watch on TV how a prominent or a little known Talmudic “genius” dressed in black receiving a Nobel Price for your research and you are sitting in your underwear drinking and thinking of how could it all go so wrong, and you would never even recall this nice student with a general Talmudic background, so shy and so helpful in making coffee, so eager to learn during research team’s meetings. Now he is a CEO of an Israeli start-up with billions invested by the General Security Service of Israel Shabak a.k.a. Israeli Security Agency (ISA), building and selling for billions gadgets or materials you and your research team spent years and tons of state budget money to develop while living in a secret location or braving an Arctic winter in Novosibirsk.

The Aviationist cites an interview given by Troy Gaffey to the Vertical Magazine in October 2019. Gaffey and David Brody founded the AVX in 2005, as it clear now with stolen from Russia technologies. Until starting his own company, Gaffey was the Chief Engineer and Senior Vice President of Research and Engineering at Bell Helicopter.

Reports of the interview in Russian

“According to chief executive Troy Gaffey, AVX used data provided by the Russian helicopter maker Kamov to reduce the separation between the rotors and offer a lighter attack aircraft than others with rigid rotors, similarly to what Kamov did with its Ka-50 Black Shark, the world’s first operational helicopter with an ejection seat and single seat version of the Ka-52 “Alligator”. Gaffey told to Vertical Magazine’s reporters: “The Russians have been flying coaxials for years. Surprisingly, they’ve been very open with their technology. They have presented technical papers at various meetings and one of the subject matters they have investigated is the clearance between the rotors. They have developed a criteria for clearance that works.” 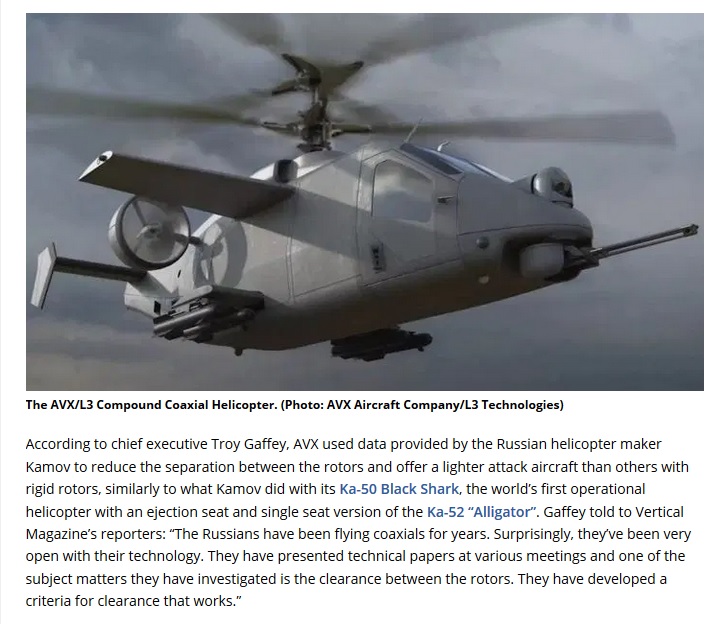 “AVX’s design also uses a lift sharing wing for forward flight. According to the company, the CCH should be capable of a cruise speed in excess of 200 knots.”

The helicopters based on stolen from Russia technologies are offered for U.S. Army FARA helicopter competition according to October 2019 article in the vertical mag.

For its new U.S. Army attack helicopter offering, AVX and L3 have borrowed a page from Russian rotorcraft manufacturer Kamov.

Some of the Russian media sources reminded that ” the F-35 Joint Strike Fighter was also based on the unique technologies developed in the USSR and stolen from Russia in 1995-1996. Before the F-35, there was the Yak-141 ‘Freestyle’ multi-role vertical take-off and landing (VTOL) fighter born in Russia. Though the Yak-141’s first flight in 1987 was a revolutionary contribution to the development of VTOL systems, the hovering death bird was largely developed as the Soviet Union. And nearly 30 years after the first flight of the Yak-141, the U.S. Marine Corps is taking off vertically from carriers with it’s F-35Bs. Here’s how the experimental Soviet fighter gave birth to the most controversial aircraft of the modern era.”

Currently, AVX, in collaboration with L3Harris Technologies, is participating in the us Army’s Future Attack Reconnaissance Aircraft (FARA) tender, the winner of which is to launch production of a reconnaissance and attack helicopter in 2028 to replace all Bell OH-58D Kiowa helicopters and half of the McDonnell Douglas AH-64 Apache fleet, reports Rambler news.

It’s not known if Russia is going to challenge the AVX for theft of its intellectual properties in court.

These are the facts, and it’s very important to understand that in all without exception fields of new technologies the Americans are now in a deep nosedive without a chance of recovering. They most stupidly don’t have ANY new technological development because Russia closed the leaks. All the Americans can do now is to make and re-make old Soviet technologies that they bought for peanuts or Russian technologies that they stole. That’s why they are in a state of shock unable to comprehend why their “new” fighter jets and helicopters are three times more expensive and many times worse than the old ones. I will tell you why. Because those founders of your military manufacturing companies faced with no possibility of stealing new technologies are reduced to printing colorful advertisements and pocketing budget money.