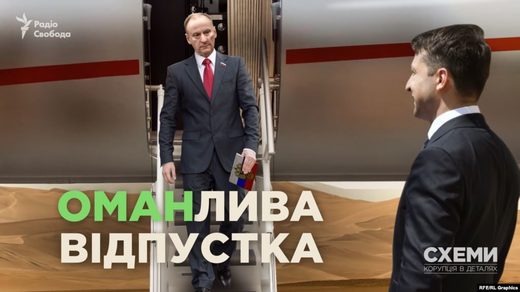 A few weeks ago Radio Svoboda, the Ukrainian-language branch of the U.S. government-financed Radio Free Europe/ Radio Liberty (RFERL) published a video and article claiming that Ukrainian President Volodomyr Zelenskiy had met secretly with Nikolai Patrushev, Secretary of Russia’s Security Council, headed by President Vladimir Putin under the Russian Constitution. This was a curious event. Zelenskiy, which the U.S. government officially backs, is an embattled political figure. His popularity has been nosediving, and he is under a flood of criticism and resistance from all sides: from moderates and democrats for failing to bring the peace he promised to Donbass or significantly tackle corruption and the country’s powerful oligarchs and bureaucrats; from the same oligarchs and bureaucrats for promising to tackle corruption; from nationalists, ultranationalists, and neofascists for attempting to bring peace to Donbass and lifting Kiev’s 20-year ban on the sale of land. This last measure is also opposed by some moderate democrats and the Ukrainian left. He has attempted to separate himself from oligarch Igor Kolomoiskii and former President Petro Poroshenko (themselves bitter oppoenents) under mounting pressure from the Donald Trump Administration to clamp down on Kolomoiskii and to investigate the Burisma scandal and the Bidens’ and other democrats’ involvement with and cover up.

Moreover still, Zelenskiy and his administration have made cautious noises regarding the truth of the Maidan snipers’ terrorist massacre that sparked the overthrow of the Viktor Yanukovych regime in February 2014. During the presidential campaign, Zelenskiy commented: “People whom came to power on blood are profiting on blood”. More recently, he decried the ‘disappearance of documentation regarding the massacre. The Prosecutor General who mentioned the same was fired in March ( An article, which appeared to be based on government leaks, by a major Ukrainian news source exposed for the first time the shocking truth of police casualties far exceeding civilian casualties on 20 February 2015 and the sale by the Poroshenko administration of places on the ‘Holy Hundred’ list of the alleged civilian victims of the massacre.

Yet RFERL’s Radio Svoboda chose this moment to raise the possibility on a ’60 Minutes’-style investigative news program Skhemy (‘Schemes’) that Zelenskiy visited Qatar in early January to meet Patrushev. Zelenskiy naturally denied this was the reason for the trip and claimed he had gone on a private visit, a small break to relax with his wife. However, Radio Svoboda’s Skhemy also claimed to demonstrate that Zelenskiy had included the trip among his expenditures for official presidential activity. This put Zelenskiy in between two flames. Either he met with Patrushev secretly or he is misused state funds. Thus, he appeared either to be involved in the very same kind of corruption his predecessors engaged in and which he has promised to combat or to be seeking to cut a deal with Putin behind the Ukrainian people’s backs – which might unite more of them with the nationalists, ultra-nationalists and neofascists against the Ukrainian president.

It is important to keep in mind that the most dangerous of Zelenskiy’s opponents come from the nationalist wing: the noted nationalists, ultranationalists, and neofascists, who are dead set against any peace agreement with the Donbass rebels and who would prefer to take it and Crimea by force. These orientations range from nationalists such as Yulia Tymoshenko’s Fatherland Party and Petro Poroshenko’s ‘European Solidarity to ultra-nationalists such as the Olg Tyagnibok’s Svoboda Party, the National Corps, and Right Sector to neofascist groups Azov, the Social-National Assembly, C14 and Revansh. They are threatening violence and even a ‘national revolution’ to ‘finish’ the Maidan Revolution, the first phase of which some from among these groups made successful by shooting killing hundreds of police and demonstrators on the Maidan and its environs and wounding hundreds more by sniper attacks orchestrated by members of the pre-Zelenskiy generation of officials of the early Maidan regime. Moreover, the land reform has united all these groups in an effort to block the land reform, creating the potential for a coalition in favor of a coup, since many of these groups have people and protectors placed in high government positions, such as MVD Chief Arsen Avakov. Now Zelenskiy is moving to reform the siloviki [security officers] and recently replaced some of these institutions’ top leaders, making the situation even more explosive since the SBU and even the military have ties to these extremist groups.

Why raise the temperature in relations between them and Zelenskiy? Could this be tied to some in the CIA, using RFERL as it often does, who support the Ukrainegate-tied attempt to have Trump defeated at the polls or removed once elected by impeachment? Can you say Eric Ciaramella and other Obama administration holdovers in America’s siloviki? Were the sending a message or were they hoping to spark an uprising by the extremists and others? It is impossible to tell for sure, but one thing is for certain. Ukrainian-American relations are a hotbed of political intrigue, and scandals like Ukrainegate and Russiagate are increasingly drawing into intrigue’ vortex much of Washington and Kiev officialdom.

At the same time, the DP and Barack Obama backer George Soros has unleashed a barrage of salvos against Zelenskiy through ‘Euromaidan Press’ funded by Soros’s Open Society Foundation through the Soros-seeded Renaissance Foundation. Here is a list of recent Euromaidan Press articles accusing Zelenskiy and his administration of being Putin puppets and a reincarnation of the Yanukovych regime:

In a more recent article, Ukrainian lawyer Vitaliy Portnikov wrote of Zelenskiy and his team: “It is a coalition of betrayal, Putin’s coalition.”. Does this remind you of opposition rhetoric in another country? Is someone afraid that Trump and Zelenskiy might come together to unravel the DP’s Ukrainegate to the very end? On Ukrainegate see REPORT: Ukrainegate and John Solomon Reports

Gordon M. Hahn, Ph.D., is an Expert Analyst at Corr Analytics, and a Senior Researcher at the Center for Terrorism and Intelligence Studies (CETIS), Akribis Group, .

Dr. Hahn is the author of the forthcoming book: The Russian Dilemma: Aspiration, Trepidation, and the West in the Making of Russia’s Security Culture (McFarland, 2021) He has authored four well-received books: Ukraine Over the Edge: Russia, the West, and the “New Cold War” (McFarland, 2018); The Caucasus Emirate Mujahedin: Global Jihadism in Russia’s North Caucasus and Beyond (McFarland, 2014), Russia’s Islamic Threat (Yale University Press, 2007), and Russia’s Revolution From Above: Reform, Transition and Revolution in the Fall of the Soviet Communist Regime, 1985-2000 (Transaction, 2002). He also has published numerous think tank reports, academic articles, analyses, and commentaries in both English and Russian language media.