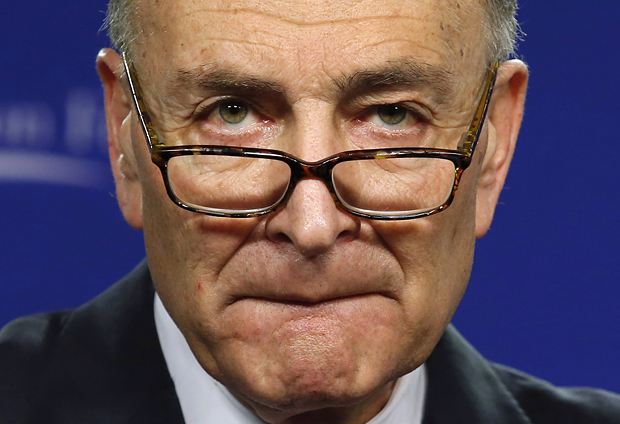 The Democrat party is officially out of control.

Appearing in front of the Supreme Court with leftist activists on Wednesday, the Senate minority leader warned Kavanaugh and Gorsuch there would be consequences if the two justices voted the wrong way during a case that challenged Louisiana’s abortion law.

Breitbart report: Schumer conceded on Thursday that he “shouldn’t have used the words I did” but then blamed Republicans for “manufacturing outrage” over the controversy.

The Hawley resolution cited that Schumer had admitted that threatening statements could “increase” the danger of violence against officials. Schumer had acknowledged this in the wake of the June 2017 attack against multiple members of Congress, which had nearly ended the life of Rep. Steve Scalise (R-LA).

Senator Schumer has acknowledged that threatening statements can increase the dangers of violence against government officials when he stated on June 15, 2017, following the attempted murder of several elected Members of Congress, ‘We would all be wise to reflect on the importance of civility in our [N]ation’s politics’ and that ‘the level of nastiness, vitriol, and hate that has seeped into our politics must be excised.’

Words matter. There’s no room for threatening rhetoric in American politics. Senator Schumer’s use of threatening language against two sitting Supreme Court justices was inappropriate and sets a dangerous standard in an already polarized political climate. I applaud Chief Justice Roberts for condemning the Minority Leader’s remarks. His behavior cannot go unchecked, and this resolution will demonstrate that this level of hyper-partisan rhetoric against any official will not be tolerated. It is time the Senate holds him accountable.

Minority Leader Chuck Schumer attacked the country’s highest judicial body yesterday. Threatening two sitting Supreme Court justices is not only disgraceful, it is dangerous. This shows how far the radical left is willing to go to realize their socialist agenda. Schumer’s actions threaten the very balance of our three-branch government. It was irresponsible, inappropriate, and unacceptable. I hope the Senate will stand together and condemn this unacceptable behavior. Of course the Minority Leader should apologize, but I’m afraid his comments have already caused irreparable damage.

However, McConnell has yet to back the Hawley resolution to censure Schumer and his controversial remarks.

Hawley wrote on Thursday that Schumer made a “non-apology” and that the New York Democrat should be censured.

“Schumer refusing to take responsibility. This non-apology is the equivalent of ‘I’m sorry you feel that way.’ He threatened #SupremeCourt Justices. Personally. By name. He should be censured #CensureSchumer,” Hawley wrote.