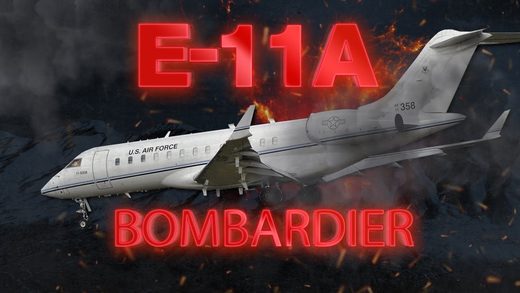 On January 27, an E-11A Battlefield Airborne Communications Node aircraft of the US Air Force crashed in the Taliban-controlled Deh Yak district of Ghazni province, 150 kilometers from the Afghan capital.

When the incident took place, the crashed plane was initially described as a passenger plane with up to 83 people on board. However, after Taliban-affiliated media accounts released videos from the crash site, the passenger plane version was debunked and the Pentagon confirmed that the incident happened with a US military aircraft.

The BACN is a communications relay and gateway system that enables real-time information flow across the battlespace between similar and dissimilar tactical data link and voice systems through relay, bridging, and data translation in line-of-sight and beyond-line-of-sight situations.

The unit cost of a single E-11A equipped with the BACN has not been officially revealed. However, it is approximately $1 billion. In January 2020, the Pentagon announced that Northrop Grumman Systems was awarded a $217.2 million modification contract to support payload equipment and services for the BACN. Work will be carried out in San Diego and at undisclosed overseas locations, with an expected completion date of January 23, 2021. The total cost of the contract after the recent modification is $570.2 million.

The crashed aircraft was assigned to the 430th Expeditionary Electronic Combat Squadron based at Kandahar Air Field and providing service across the CENTCOM area of operations.

All existing E-11As are deployed in Kandahar. The E-11A flies over Afghanistan constantly. It surpassed 10,000 sorties in 2017, about eight years after being initially deployed to the country.

The loss of such a high-value asset as the E-11A is a major blow to the US capabilities in the region by itself. Prior to the January 27 incident, the US had 8 aircraft equipped with the BACN: four E-11As and four unmanned EQ-4Bs which are modernized variants of the RQ-4 Global Hawk. Now, there are only 7 such aircraft capable of performing command-and-control battle management functions, communication, electronic warfare tasks, and surveillance. 12.5% of the BACN fleet was lost in a single day.

The mystery surrounding the crash is another issue. The Taliban was first to report that the incident involved a US military aircraft on January 27 and release videos and photos from the site. The movement claimed that the aircraft was shot down by a rocket and applauded “the bravery and courage” of the “men” that did this.

Reports appeared claiming that Michael D’Andrea, head of the CIA’s Iran Mission Centre and one of the persons that orchestrated the assassination of Iranian General Qassem Soleimani, died in the E-11A crash, which he supposedly used as a mobile command. This story describes the E-11A crash as Iranian revenge for the actions of the United States. Nonetheless, these claims remain unconfirmed.

The US military did not comment on the supposed death of D’Andrea, but strongly denied reports that the aircraft was shot down by enemy fire. It also announced that on January 28 US forces recovered the remains of two personnel from the site, the flight data recorder and destroyed the remnants of the aircraft.

The aircraft destruction was needed to prevent high-tech equipment from falling into the hands of the Taliban. The aforementioned casualties were identified as Lt. Col. Paul K. Voss, 46, and Capt. Ryan S. Phaneuf, 30.

In general, the E-11 flies with a crew of two. So, the casualty part of the US official version is plausible. The problem is the ability of US forces to ensure that no high-tech equipment or sensitive data leaked to the Taliban.

Images from the crash site released from the Taliban on January 27 show at least one burned body.

The D’Andrea death story could easily appear to be just a successful example of propaganda in the ongoing US-Iranian media and diplomatic standoff. However, the reality behind this media noise may appear even more hard-hitting with some BACN components soon appearing in the hands of key US geopolitical competitors.