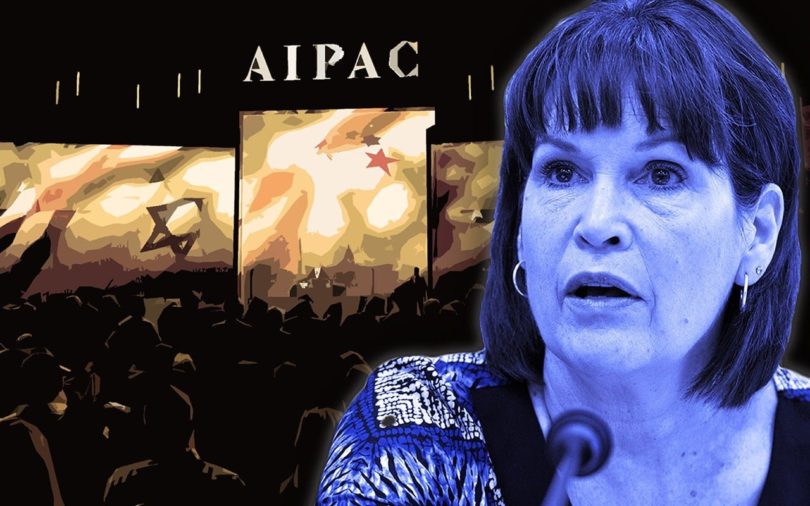 “McCollum has become a target of the pro-Israel organization as a result of introducing H.R.2407, an historic piece of legislation that aims to prohibit U.S. taxpayer money from being used to detain Palestinian children in Israel. ‘Israel’s system of military juvenile detention is state-sponsored child abuse designed to intimidate and terrorize Palestinian children and their families,’ said McCollum after introducing the bill, ‘It must be condemned, but it is equally outrageous that U.S. tax dollars in the form of military aid to Israel are permitted to sustain what is clearly a gross human rights violation against children.’”

ROBERT STEELE: AIPAC, like B’Nai Brith and the Anti-Defamation League (ADL) is an agent of a foreign power. It is in my view an active participant in the bribing and blackmailing of Members of Congress as well as governors, legislators, judges, prosecutors, chiefs of police, and sheriffs across the country, while also support economic and military (including nuclear) espionage by the Mossad. All three of these organizations are assuredl aware of and probably helping cover up Mossad engagement in the trafficking of drugs and small children as well as the theft of intellectual property and nuclear as well as biological and chemical weapons.

All three of these organizations have been defaming, cyber-stalking, and otherwise committing tortious interference with the affairs of tens of thousands of citizens who have done nothing wrong — who have exercised their critical  thinking skills and exercised their 1st Amendment rights to articulate, freely, their opposition to US taxpayer funds being used to pay for a criminal, apartheid, genocidal state that sponsors terrorism around the world.

It is my hope that President Donald Trump and the Attorney General are well along in their RICO investigation. I continue to recommend that the President offer an absolute pardon to every person every bribed or blackmailed by the Zionists, conditional on their full disclosure of all transactions to the new special military counterintelligence task force that is replacing the largely worthless FBI that appears to be — as are the CIA and Department of State — largely coopted by the Zionists who commit massive economic and industrial espionage with impunity precisely because they have bribed and blackmailed Members of Congress into giving them “protection.”

Separately, I am aware of one group that is forming to bring a class action lawsuit against the ADL particularly, but I increasingly see the need to expand that to include AIPAC and the B’Nai Brith. This is not a lawsuit they will be able to escape.  This is a lawsuit that will attract tens of thousands of plaintiffs, each of whom will be trained to create and maintain a legal journal documenting every instance of defamation and tortious interference. This is not a case that will be settled. This is a case that will take discovery to levels never before achieved. Zionist Israel’s reign of terror in the USA is coming to an end.

What has changed is the growing and broad revulsion that a majority of Jews now feel over the genociding of the Palestinians and the treason committed by Zionists within the USA, with 9/11 and the Ghislaine Maxwell, Jeffrey Epstein pedophilia entrapment ring. Many Jews bought into the myths of Zionism but now see the light. Zionism is not Judaism. More to the point, it is no longer possible for the Zionists to repress the truth about their apartheid genocidal regime that sponsors terrorism, espionage, and crimes against children as a matter of day to day routine.

The USS Liberty should have been the end of the Zionists, but because of the perfidy of Lyndon Baines Johnson, and his successors up to Dick Cheney and the Clintons, they have continued to “own” most Members of Congress and so many others.

9/11 was the beginning of the end of Zionism. Maxwell-Epstein pedophilia entrapment ring (one of fifty across the entire USA — this is how the Zionists got 27 legislatures to make it a felony to criticize Israel, never mind the 1st Amendment) is the stake in the heart of Zionism because it will help finish off the MEGA group of Zionists in America who funded both 9/11 and pedophilia entrapment networks, as well as the bribery of the US Congress.

Below are just three references. Representative Betty McCollum is a break we have all been waiting for.  The RICO investigation of the social media platforms will inevitably reveal the criminality of the ADL, and when complemented by the class action lawsuits against both the social media platforms and the ADL, AIPAC, and B’Nai Brith directly, what we are going to see if the equivalent of previous “evictions” of the Jews with one big difference: this time only the Zionists will be expelled, and all Jews who reject Zionism and reaffirm their commitment to America First will be warmly embraced — as will be Jews in Palestine who accept the restoration of Palestine.

Memoranda for the President on 9/11: Time for False Flag Deep State Truth! UPDATE 19: Israel Did It with Cheney & Mueller [New Book Indicts FBI In Detail]

54 Zionist Strikes (Zionism is Not Judaism)