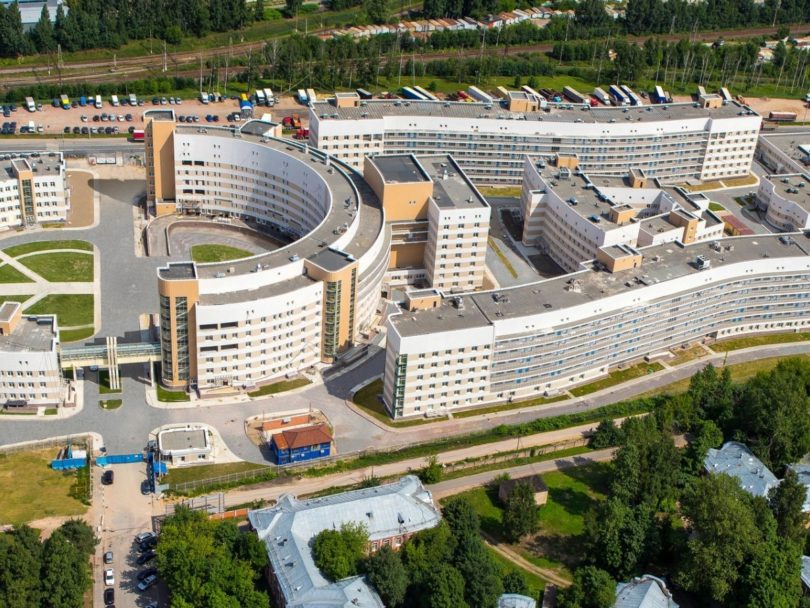 Last year a curious trend appeared in Russian language corporate media and social media concerning health care, a medical info-Maidan, so to speak. Every day the news feeds were flooded with negative and downright fake news about doctors, hospitals, ERs, medical emergency crews, and first responders. There were rumors of thousand of doctors quitting their jobs at once. There were rumors of thousand hospitals closing. Media circulated fake news about first responders attacking and even killing sick people. There was real and fake shortage of life critical drugs in pharmacies. There were price wars, and horror stories about obstetrics and gynecology care centers. Not all of them, but many of those rumors led to official responses and law enforcement investigations that proved them to be fakes.

Looking at the social media and news trends in search for the next PSYOP, I could tell that something was brewing, but I couldn’t decide if this something was aiming to discredit the government, or it was an info attack before some major public health event that was supposed to take place in Russia.

After President Putin’s Federal Assembly Address, (on the government resignation and a peculiar behavior of the RT editor-in-chief Margarita Simonyan see here) on January 15th the government resigned including the health minister Veronika Skvortsova, who is remembered for several major scandals – from failures of public procurement of vital drugs, to unsuccessful optimization of the health care system as a whole.

She was followed by her first deputy Elena Boiko,

Officially E. Boiko left out of her own volition, but unofficially she was fired for, “incompetence amounting to outright ignorance; indifference to the actual results of her activities; irresponsibility; demonstrative reluctance and fear to cooperate with the expert community.“

There were other notable health officials dismissals, like Minister of health care of Chuvashia, Vladimir Viktorov, who became famous for saying that ‘If a woman has a sexual intercourse with seven men before the birth of her first child, then that means 100 percent she will be infertile. “With the health department’s physician Sergei Milayev elaborating on this claim. Even a small number of sexual partners – and frequently changing them – “can lead to tubal peritoneal infertility.”

“We do not advise playing roulette [with your body]. You may not be lucky,” Milayev says. “Our main task as parents is to educate our children about chastity, which is the most reliable guarantee of health, including reproductive health, because any disease is easier to prevent than to treat.”

It’s not immediately clear why he was dismissed, but these two physicians comments predictably followed by the social media hysteria with such foreign agents heavyweights like the Radio Svoboda calling the doctors opinion “dubious medical claims made by prominent health and social-welfare officials in Russia — particularly about sexuality.”

A new health minister, Mikhail Murashko, a 53-year-old obstetrician and gynecologist who previously headed Roszdravnadzor, the Federal Service for Surveillance over Healthcare, started his tenure with a lecture for the medical university students sharing with them data that Russia has seventy thousand cases of medical malpractice annually and that the ministry wants to place emphasis on the safety of medical procedures and improvement of the situation. His words were immediately amplified by the fringe publications and the social media with the headlines like “Murashko: Doctors kills patients in Russia.”

Ten percent of deaths in the U.S. annually are caused by medical errors or mistakes, Murashko was speaking about the medical mistakes, not deaths, but the media hysteria went underway, anyway.

There is one simple reason for making the free health care in Russia to appear to be much worse than it actually is. As explained by the expert for the Free Press: “a network of for-profit medical institutions provides services that are not available in the free insurance segment. And the worse free health care appears, the greater becomes the profits of paid medical centers.”

One example to demonstrate how the media organizes those info-Maidan events. A town of Kurgan resident after his return from China in January, accused the federal Channel One of “inciting hysteria” on the topic of coronavirus. The man was offered to appear on a program to talk about his visit to China, but he refuse after the show produces told him not to tell the truth but something to produce “the greater effect”. According to him, similar offers were received by his friends, who also recently returned from China, but they all refused to appear on the shows after they realized that show wanted them to lie. The situation in China is improving, the man said, and hysteria around the epidemic is more damaging than the disease itself.

So, when the RT (Russia Today) joined the medical info-Maidan by using an outdated photo of abandoned hospital building to illustrate an article on the Coronavirus, it not just raises questions of the media responsibility in time of global crises, but also suspicions that this federally funded and Soros controlled news company is trying to torpedo the free public health care in Russia to benefit the private paid for-profit medical establishment and, what’s more sinister, those who stand behind the Coronavirus release in China.

This is the image of the Botkin Infectious Diseases hospital as it posted by the RT photo editor. 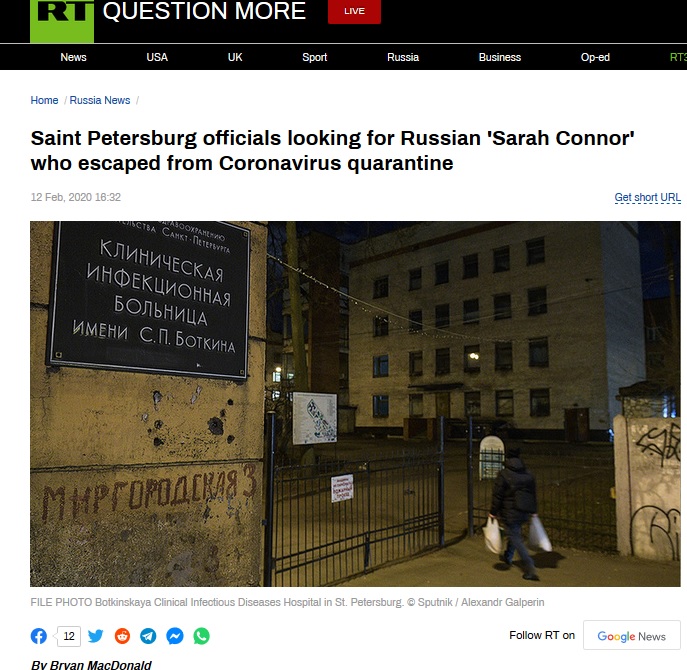 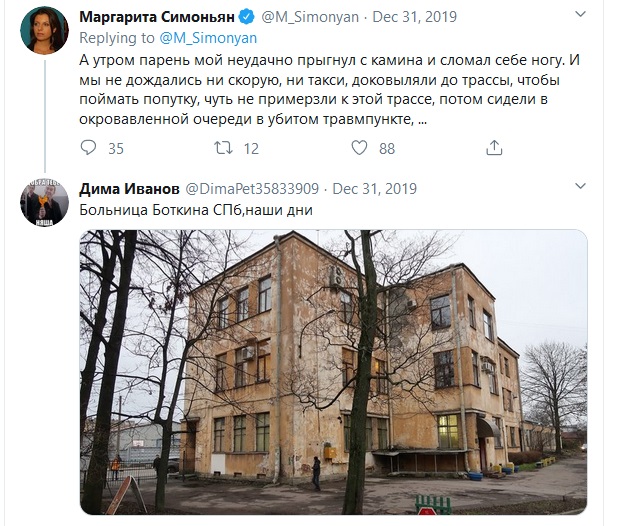 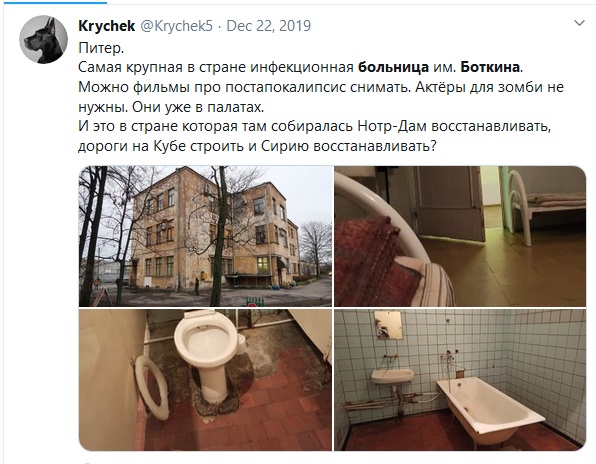 And this is how this medical center looks in real life. 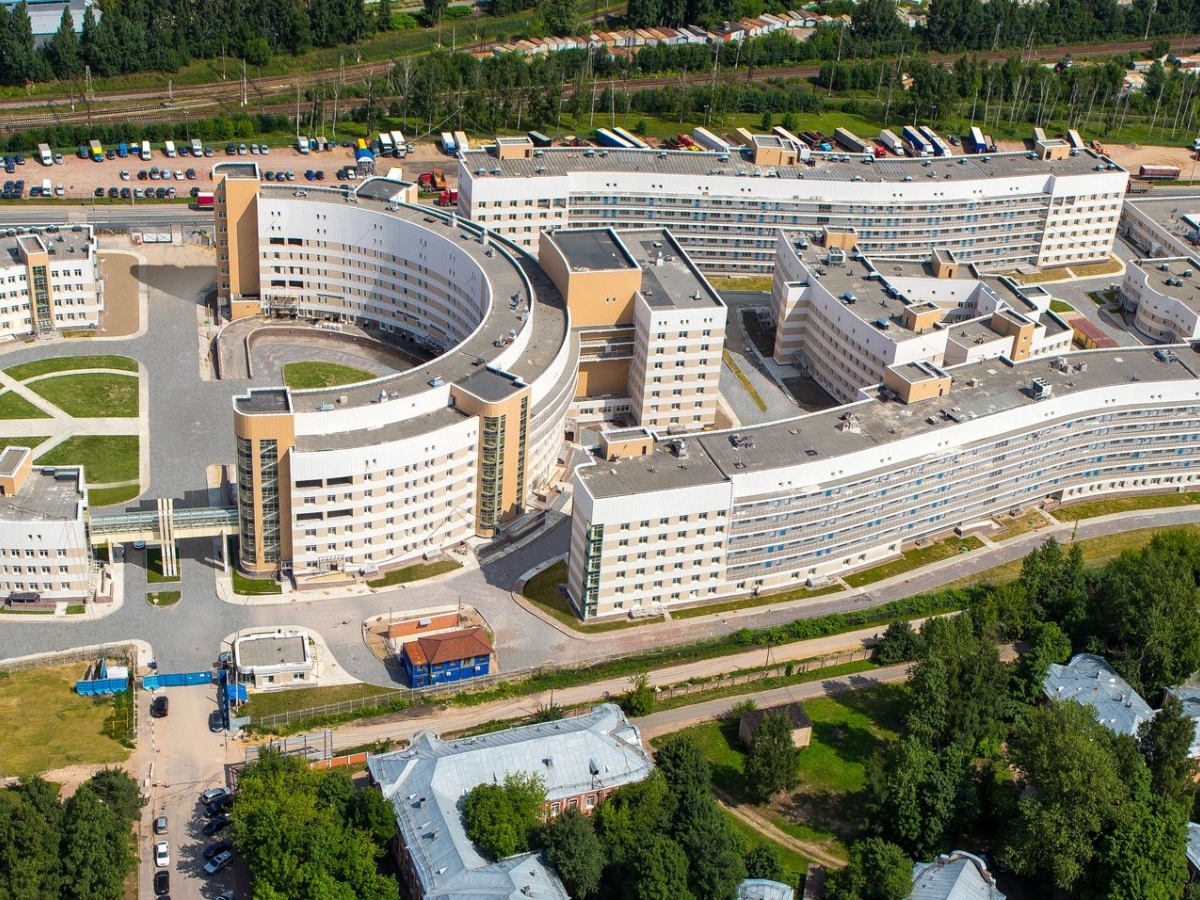 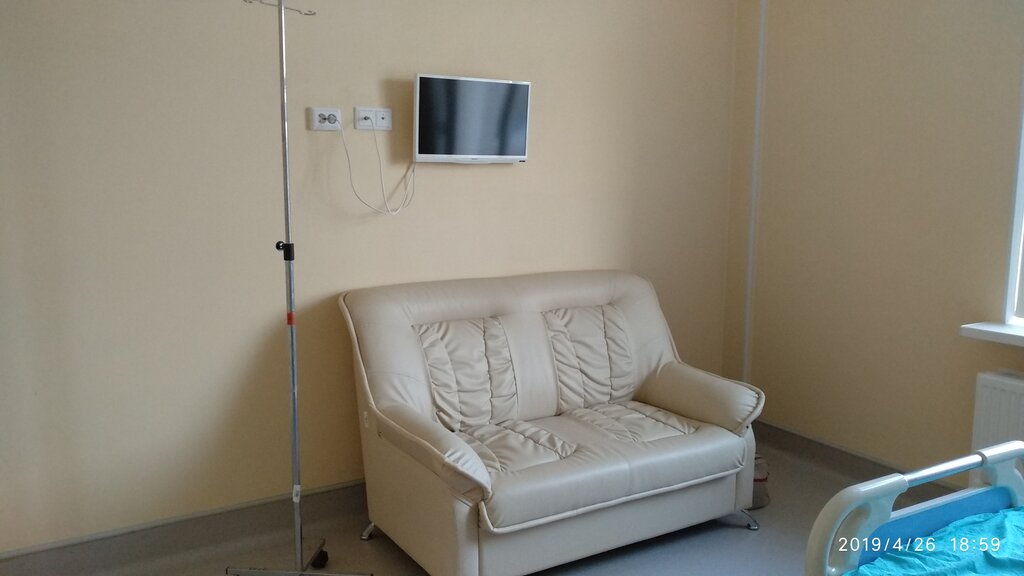 The Corovirus epidemic provides a new perspective to the 2019 medical info-Maidan in Russia.

The earliest reported symptoms occurred on 1 December 2019, in a person who did not have any exposure to the Huanan Seafood Wholesale Market or to the remaining 40 of the first cluster detected with the new virus.

On December 2nd, Russian President Vladimir Putin and his Chinese counterpart Xi Jinping on Monday oversaw the launch of a landmark pipeline that will transport natural gas from Siberia to northeast China. The move cements China’s spot as Russia’s top export market and gives Russia a potentially enormous new market outside Europe. This pipeline also provides China with the energy security that is out of reach of their American adversaries.

On December 31, Chinese authorities informed the World Health Organization (WHO) about an outbreak of an unknown pneumonia in the city of Wuhan – a large trade and industrial center in central China populated by 11 million people.

On February 10th, Two Chinese nationals hospitalized in Russia with the novel coronavirus recovered were about to be discharged from the hospital

By February 10, In Russia over 20,000 people, including over 6,000 Chinese citizens, were under medical supervision on suspicion of having come in contact with coronavirus-infected individuals,

In total, 769 people have been taken to hospital for further tests since December 31, 2019 with virus being detected in two.

On February 12, Russia has officially disappeared from the map of infected areas with zero cases of coronavirus infection after the second Chinese citizen, previously diagnosed with the infection, has been discharged from a hospital in Transbaikalia. Doctors say that the man was healthy.

If the Coronavirus epidemic was a hit job to “punish” China for buying Russian natural gas, then it all makes sense, and the timing when the virus first appeared, and the place to frame China’s biggest bio-research institute with this virus released by foreign agents in Wuhan to implicate China.

Russia has hundreds of thousands Chinese citizens working, residing, and millions visiting. Given the geographic proximity, the 4,300 km (2,670-mile) land border with China, and several populated cities near the boarder, it seems inevitable that the virus would spread in Russia the way it did in China. The Health Ministry of Russia was supposed to play some sinister role in all this. The spread of the virus to Russia was supposed to place a division between two nations and to make Russians to blame Chinese, and, fingers crossed, to sever economic relations with China.

But, things didn’t go according to the plan.

The Chinese authorities have been remarkably efficient in curbing the spread of the virus. Russians don’t like to blame anyone. Whatever plans the Health Ministry apparatchiks were harboring during the 2019 were disrupted by the removal of its minister and her deputy, and by a complete overhaul of the government.

But, the most important miscalculation in this plan resides in the long held falsity that Russians are Asians – the white, blond, blue eyed Mongols, of sort. We have heard this for centuries. It was a pretext for the Nazi ideology for the WWII invasion of Russia claiming Russians being an Asian-type subhumans.

Here we have a virus targeting mostly Asians, by fluke or by bioengineering. With the virus spreading like a wild-fire in super-modern and well prepared China, it was supposed to simply devastate those Russians with their “failing health care,” but it didn’t. Clearly, Russian health care is much better than its critics claim. But, the true reason why the Coronavirus failed in Russia is biology. Russians, despite living side by side with several different Asian nations, don’t carry any of the predominant Asian haplogroups. Those who had designed this epidemic made a miscalculation, because their entire invented image of Russians is bogus.