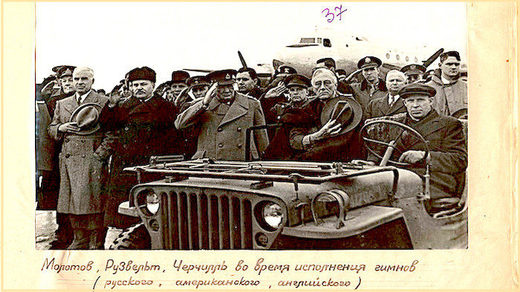 As part of a WWII document trove declassified ahead of the 75th anniversary of the Yalta summit, never before seen photographs show US and British leaders and officers arriving in Crimea and touring Sevastopol with Soviet hosts.

British Prime Minister Winston Churchill and US President Franklin Delano Roosevelt traveled to Crimea in February 1945, to meet with Soviet leader Joseph Stalin at the Black Sea town of Yalta.

Official photos from the Yalta conference itself were taken by American photographers at the Livadia Palace, where the US delegation was staying. Prior to the summit, however, Soviet photographers captured the arrival of Allied leaders and their activities in Sevastopol.

In the run-up to the 75th anniversary of the #YaltaConference, @mod_russia releases declassified files depicting the process of preparation for this historical event which determined the whole world order after #WWII https://t.co/ZyvhG1o5aL #ArchiveDocuments pic.twitter.com/RVCfUP7NLL

These images have just been made public by the Russian Defense Ministry as part of a large trove of declassified documents that also includes operational maps and security orders to the Black Sea Fleet.

Churchill and FDR arrived in Sevastopol by airplane, where they were greeted at the airport by Soviet Foreign Minister Vyacheslav Molotov.

A fleet of cars was organized by the Soviet hosts to drive the visitors to their accommodations, first in Sevastopol, then in Yalta.

Crimea had been occupied by the Axis invaders in 1941, and liberated less than a year prior to the conference. Reminders of the recent war were everywhere, with American and British delegations touring the heights above Sevastopol and examining abandoned German hardware.

Churchill and the British delegation had also visited Sapun Ridge, the British cemetery, and the Malakhov Kurgan memorial, dedicated to the 1854-55 Crimean War.

Several of the photos show US sailors touring an unnamed Soviet cruiser anchored in Sevastopol and mingling with their Baltic Fleet colleagues.

One particularly interesting snapshot shows a dinner at the Fleet House in Sevastopol, with several African-American sailors seated next to their Soviet colleagues. The US Navy was racially segregated at the time.

At Yalta, Allied leaders confirmed their determination to obtain Nazi Germany’s unconditional surrender, and mapped out the post-war occupation zones as well as permanent new borders in Europe. War crimes tribunals were set up, and the Soviet Union agreed to join the United Nations.

Stalin also promised that the Soviet Union would join the US war on Japan within three months of the end of hostilities in Europe. True to his word, the declaration of war came on August 8. Two days prior, Roosevelt’s successor Harry S. Truman had ordered the atomic attack on Hiroshima. With their Kwantung Army trapped in China by the Soviets and the home islands facing the new US superweapon, the imperial Japanese government chose to surrender, ending WWII.