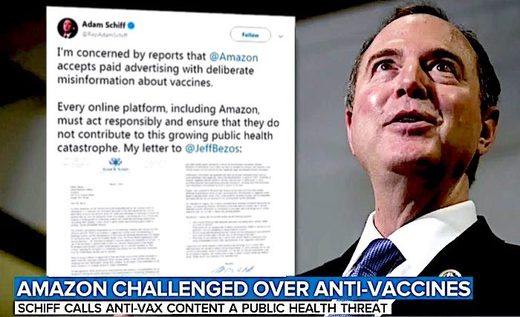 A national medical association is suing Rep. Adam Schiff (D-Calif.). The case accuses the California Congressman of abuse of power, claiming that he bullied tech companies into censoring information about vaccines.

The Association of American Physicians and Surgeons (AAPS) filed the suit in a U.S. District Court in D.C. on Jan. 20, 2020. The complaint points to letters Schiff sent to Google, Facebook, and Amazon in February and March of 2019 urging those companies to discredit or deplatform any content that suggests vaccines may be harmful.

The letters express Schiff’s concerns about the nation’s declining vaccination rates, and requests that companies take steps to stop what he calls a “growing problem.” Schiff wrote:

“If a concerned parent consistently sees information in their YouTube recommendations that casts doubt on the safety or efficacy of vaccines, it could cause them to disregard the advice of their children’s physicians and public health experts and decline to follow the recommended vaccination schedule. Repetition of information, even if false, can often be mistaken for accuracy, and exposure to anti-vaccine content via social media may negatively shape user attitudes towards vaccination.”

Schiff’s suggestion gave quick results. Within 24 hours after Schiff posted one of his letters, Amazon removed the popular documentaries “Vaxxed” and “Shoot ‘Em Up: the Truth About Vaccines” from its streaming platform. A few months later, Twitter added a disclaimer above search results for an AAPS article discussing vaccine mandates, and a Facebook search for AAPS articles on vaccinations now leads users to links from the World Health Organization, the National Institutes of Health, and the Centers for Disease Control and Prevention.

Within months of Schiff’s letters, traffic to the AAPS website fell significantly. Information found on the site includes a resolution to put a moratorium on vaccine mandates, an article highlighting the importance of informed consent in vaccine administration, and an open letter to the California legislature opposing SB 276 — a law passed in 2019 that removed previous exemptions for parents who chose to opt out of the state’s vaccine program.

Schiff states that his aim is to crackdown on medically inaccurate information that interferes with vaccine compliance, but the AAPS consists of board certified doctors, many of whom administer vaccines. The organization blames Schiff’s letters of inflicting “a reputational injury on AAPS” by creating a false dichotomy in consumers’ minds by dividing all speech on vaccinations into two categories: “pro-vaccination” or “anti-vaccination” giving the latter an air of anti-science, ignorance, or fake news. The suit states:

“In creating that arbitrary binary divide, Defendant Schiff ignores all the valid medical, economic, and legal points in AAPS’s speech on vaccines. Defendant Schiff’s false dichotomy does not recognize either the merits of AAPS’s speech on the existence of positions-including AAPS’s position in favor of informed discourse and informed consent-outside Defendant Schiff’s simplistic binary division… While he is entitled to his opinion, his proposed censorship of other opinions is inimical to both the First Amendment and the scientific method.”

Attorney Andy Schlafly, general counsel for AAPS, states that his organization is not anti-vaccine. Rather, their aim is better educated patients:

“[AAPS] is not for a one-size-fits-all rule by government, and certainly not for distorting information by censorship. Once we censor information, how are new discoveries about vaccinations supposed to get out there in the public? Once you start to allow censorship, then you lock in an ignorant status quo, and there’s no way for new revelations to become public.”

Governments urge some sort of vaccine compliance, but mandates are the strongest method. This involves enforcing the procedure by law. The United States has no federal mandate, but in all 50 states, vaccinations are required for children to enter the school system. Most states offer exemptions due to either religious or philosophical objections, but Mississippi, West Virginia, New York, and California only allow vaccine exemptions for verifiable medical reasons.

But with a growing list of immunization requirements and easier access to information that questions the safety narrative, increased efforts forcing parents to vaccinate their children have resulted in push back. Schiff blames websites and videos found online for the growing resistance to mandated vaccination. He says these sources spread false information and create unwarranted fear. Schiff writes:

“The scientific and medical communities are in overwhelming consensus that vaccines are both effective and safe. There is no evidence to suggest that vaccines cause life-threatening or disabling diseases, and the dissemination of unfounded and debunked theories about the dangers of vaccinations pose a great risk to public health.”

“The vaccine manufacturers themselves acknowledge that there are many serious harms, sometimes including death, that are caused to some people by their product. It’s right on the insert for a vaccine product. There’s also a fund that has paid out over a billion dollars to people for harm caused by vaccines. It’s enormously difficult to recover that money, but they’ve paid out more than a billion dollars.”

This is why AAPS supports a policy of informed consent: so patients can gain an understanding of the “full range of medical, legal, and economic considerations relevant to vaccination and any other medical intervention, which inevitably involves risks as well as benefits.”

While all state laws do allow for legitimate medical exemptions, Schlafly said that many parents may not know how to identify if their child could be eligible.

“Some people are more vulnerable to vaccine harm than others, and people need to be able to get that information on the internet,” he said.

A loss of trust in public institutions combined with the rise of fake news has made it difficult for the public to tell truth from falsehood. Even statements made by trusted institutions seem to conflict. For example, the U.S. Food and Drug Administration states that vaccines are “are extremely safe and effective,” while The U.S. Supreme Court has stated that vaccines are “unavoidably unsafe.”

Schlafly says that companies who complied with Schiff’s request also share in the censorship, but he believes their move was made under duress. Schlafly argues that letters written by a powerful congressman currently leading a campaign to impeach the president carries considerable weight, and a very real threat of reprisal.

“He can force through legislation that takes away Big Tech’s immunity from lawsuits, and can cut into their profits through integration and trade policies. He can also subpoena them, require them to come to Congress before hearing, and answer a bunch of tough questions.”

The Epoch Times contacted Schiff’s Washington and Burbank offices for a statement and allowed two days for a response regarding the AAPS lawsuit. No response was received.

Even if Schiff’s claim of untarnished safety in regard to vaccines was verifiably true, federal law prohibits the government from censoring an opinion that is demonstrably false.

The AAPS lawsuit aims to protect a fundamental aspect of the American experience, according to Schlafly. He says that Schiff’s letters represent the worst kind of censorship: one that aims to kill ideas.

“We’re not talking about limiting where somebody can hold a protest in a city. That’s a restriction that does not have a huge impact. But when somebody starts to censor content, and block or disallow speech because they disagree with what is being said, all Americans should be outraged by that.”