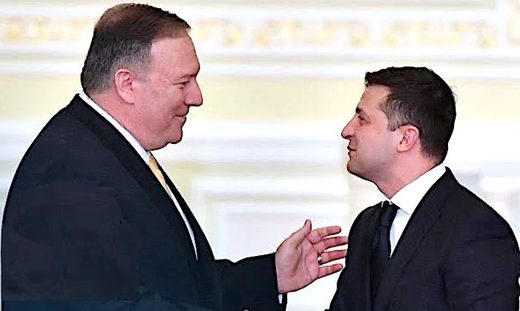 US Secretary of State Mike Pompeo won’t be winning Ukraine’s ‘friend of the year’ award. A week after he told an NPR reporter that Americans don’t care about the country, he allegedly told a Kiev audience to forget about Crimea.

That’s according to Novoye Vremya (NV), an influential Ukrainian news outlet, which quotes Pompeo as saying:

“Crimea is lost [for Ukraine]. World leaders understand this. Ukraine has given up Crimea, and Russia is not [a state] from which something [like this] can be taken away.”

NV says the reality check was delivered at a private meeting last Friday, in response to a question from a Tatar activist.

Emine Dzhaparova had apparently asked the secretary of state to keep the peninsula in the US foreign policy spotlight and suggested organizing a Washington conference on the subject. Sources told NV that the expression on his face made it obvious “he had slightly different priorities.”

However, in a reminder that what US diplomats say privately often digresses from the official line, his own State Department spokeswoman took a different view. On the same day, Morgan Ortagus announced that the US will continue to impose sanctions against Russia, and insisted Washington still demands that Crimea be returned to Ukraine.

Meanwhile, just a year ago, Pompeo himself released a statement entitled “Crimea is Ukraine,” which said much the same thing. His Kiev visit came as part of a whirlwind tour of former Soviet countries, which also included Belarus, Kazakhstan, and Uzbekistan.

Crimea was reabsorbed by Russia in March 2014 following the ‘Maidan’ protests in Kiev which led to the overthrow of Viktor Yanukovich’s Ukrainian government. In a referendum over 95% of Crimean voters supported the move. Moscow believes the process was conducted in full compliance with international law and the United Nations Charter. However, Western countries consider it an illegal annexation and have imposed sanctions, while formally continuing to regard Crimea as part of Ukraine.

The peninsula was previously part of Russia from 1783 to 1954, when it was transferred to Kiev’s control, while both countries were part of the USSR. No vote was held and Crimeans had no influence in the matter, with the Supreme Soviet simply issuing a decree. Many experts, both Russian and foreign, question the legitimacy of that transfer. Russian President Vladimir Putin previously said the subject of Crimea is now “closed.”