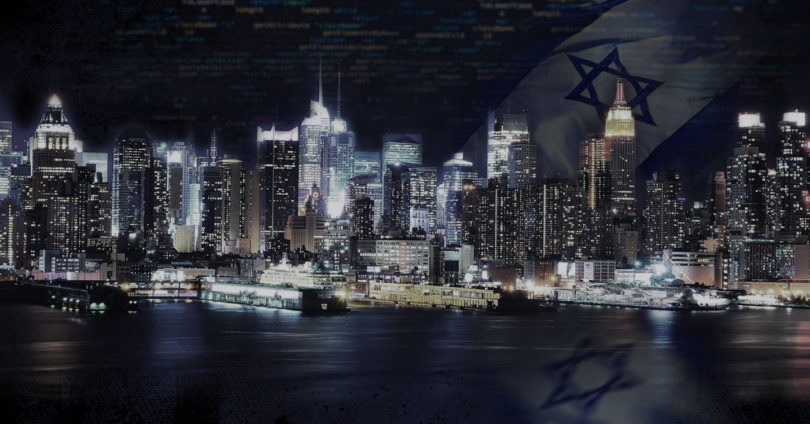 New York City taxpayers are on the hook for a multi-million dollar cyber center in the heart of Manhattan with deep ties to Israel’s high-tech intelligence apparatus.

Early last week, the city of New York launched — with little media scrutiny — one of two new massive cybersecurity centers that will be run by private Israeli firms with close ties to Israel’s government, the so-called “Mega Group” tied to the Jeffrey Epstein scandal and prominent pro-Israel lobby organizations operating in the United States. The centers were first announced in 2018 as was the identity of the firms who would run them: Israel-based Jerusalem Venture Partners and SOSA.

As MintPress has reported on several occasions, all three of these entities have a history of aggressively spying on the U.S. federal government and/or blackmailing top American politicians, raising concerns regarding why these companies were chosen to run the new centers in the heart of Manhattan. The news also comes as Israeli cybersecurity companies tied to Israeli military intelligence Unit 8200 were revealed to have access to the U.S. government’s most classified systems and simulating the cancellation of the upcoming 2020 presidential election.

The new cybersecurity centers are part of a new New York City public-private partnership called “CyberNYC” that is valued at over $100 million and officially aims to “spur the creation of 10,000 cybersecurity jobs and make New York City a global leader in cyber innovation.” CyberNYC is an initiative of New York City’s Economic Development Corporation.

However, the companies that will be responsible for creating those cybersecurity jobs will benefit foreign companies, namely Israeli and most of the jobs to be created will go to foreigners as well, as media reports on the partnership have quietly noted. Those reports also stated that, while the stated purpose of the centers is to create new jobs, the Israeli firms chosen to run them — Jerusalem Venture Partners (JVP) and SOSA — view it as an opportunity to provide Israeli cybersecurity companies with a foothold into the American market and to see Israeli cybersecurity products adopted by both small and medium-sized American businesses, not just large corporations and government agencies.

For example, the founder of JVP and former Knesset member, Erel Margalit, told the Jerusalem Postthat “the center we are setting up [in New York] will assist Israeli hi-tech companies in collaborating with customers and companies in the US and around the world.” More recently, ahead of the opening of the cybersecurity center that Margalit’s firm will manage, he told the Times of Israel that “New York is about something else, it’s about the drama of taking investors from Israel and Spain or Paris and other places and taking them to the next business level.” In other words, the companies set to benefit from these new centers will be foreign and mainly Israeli, as JVP invests the vast majority of its funds in Israeli start-ups.

Given that Wilson Lin, the head of CyberNYC, explained the reason behind the initiative as the fact that “there are not enough well-trained people in cyber security to fill the jobs that are required for a safer, more thriving commercial sector,” the statements of JVP’s founder strongly suggests that those “well-trained people” will not be Americans in New York, but will be brought in from abroad, namely Israel’s cybersecurity sector.

Of the companies chosen by CyberNYC to run its new cybersecurity centers, both have clear and demonstrable ties to Israel’s government and military intelligence as well as controversial groups of pro-Israel donors with considerable political clout in the United States.

For instance, Jerusalem Venture Partners was founded by Erel Margalit in 1993, with funding from the Yozma Program, an Israeli government program to “incentivize venture capital investment” in Israel. Since then, it has been a driving force in the development of Israel’s hi-tech sector and regularly collaborates with the Israeli Ministry of Economy and Industry and the EISP (Entrepreneurship and Innovation Support Program) alumni organization of Unit 8200. Today, it is the second largest venture capital fund in Israel.

JVP was also the sole venture capital fund chosen to partner with Israel’s government and military to establish the public-private “cyber hub” in Beersheba. This “hub” not only houses the IDF’s technology campus, but also the Israel National Cyber Directorate, which reports directly to Israel’s Prime Minister, as well as a high-tech corporate park that mostly houses tech companies with ties to Israel’s military intelligence apparatus. The area has been cited in several media reports as a visible indicator of the public-private merger between Israeli technology companies, many of them started by Unit 8200 alumni, and the Israeli government and its intelligence services.

In addition to JVP’s close ties to Israel’s government and its key role in the merging of Israel’s private cybersecurity sector with Israeli military intelligence, JVP also has close ties to the Bronfman family through its Chief Operating Officer and general partner, Fiona Darmon. Prior to working with JVP, Darmon worked for Claridge Israel, the investment arm of the Bronfman family that was founded by Charles Bronfman in 1987.

Charles Bronfman was a one-time business partner of Mossad agent Robert Maxwell, father of Jeffrey Epstein’s alleged madam Ghislaine Maxwell, and co-founded the “Mega Group”, a group of pro-Israel oligarchs with clear and direct ties to organized crime, alongside Leslie Wexner, the main financier of Jeffrey Epstein’s operation that involved the sex trafficking of minors on behalf of Israeli military intelligence.

SOSA was founded much more recently than JVP, yet also has close ties to Israel’s government and military. Created in 2014, SOSA has grown rapidly by connecting mostly Israeli start-ups with investors and through its partnerships with the IDF. This partnership first became clear in 2018, when SOSA created the Homeland Security (HLST) Innovation Hub, which the Times of Israel as “a first of its kind program that aims to create a defense and security innovation community that will match homeland security and defense industry firms with startups, to help industry giants maintain their leading edge.”

Last year, SOSA became one of two companies to manage the Israeli Ministry of Defense’s program INNOFENSE, an innovation program for civilian tech start-ups in the country’s defense industry. SOSA’s collaboration with the IDF also involves the creation of “joint business activities between international companies, [government] security organizations, investors and startups,” making SOSA a key player in the blurring of the line between Israeli military intelligence and its private tech sector.

SOSA is also directly partnered with two of Israel’s top weapons manufacturers, Rafael Advanced Defense Systems, as well as defense electronics companies ELTA Systems and Elron Electronics, the former parent company of another Israeli weapons manufacturer Elbit Systems. It is also partnered with the Unit 8200 alumni-founded tech company CheckPoint Systems and Leumi Tech, the hi-tech subsidiary of one of Israel’s largest banks, Leumi. Leumi Tech exists only in the U.S. and specifically aims to “provide a comprehensive suite of products and services to Israeli high-tech companies operating in the US.” The bank was recently forced to pay $400 million to the U.S. government for assisting U.S. citizens, most of them dual U.S.-Israeli citizens, in preparing false tax returns and hiding their assets in offshore accounts.

SOSA’s General Manager Guy Franklin is of particular interest, due to his close ties to the Israeli American Council (IAC), a pro-Israel lobby group created by convicted felon and ultra-Zionist millionaire Adam Milstein and largely funded by Sheldon and Miriam Adelson. The Adelsons are also the largest donors to both President Trump and the Republican Party in the United States.

Of the $100 million in funding for the CyberNYC initiative, $30 million comes from New York taxpayers and the remaining funds coming from the program’s partners, which includes Goldman Sachs and the Israeli military intelligence Unit 8200 incubator Team8, a start-up accelerator which has been discussed at length in several past MintPress News reports, including the recent MintPress investigation into the Israeli company Cybereason — a partner of Team8.

Team8, particularly its presence in New York, has long been associated with the push by pro-Israel political donor and American hedge fund manager Paul Singer and Israel’s government to make Israel the global cybersecurity leader as a means of preventing countries from boycotting Israel over human rights violations and war crimes. Team8’s role in CyberNYC will see them not only finance part of the initiative but also training cybersecurity workers who will be hired as part of the partnership.

Singer, who is based in Manhattan, created Start Up Nation Central in 2012 to specifically outsource American tech jobs to Israel in collaboration with top AIPAC officials and Israel’s government. Meanwhile, in parallel, Israel’s government and intelligence apparatus began a policy that same year that involved outsourcing intelligence and military intelligence operations to private companies created for that very purpose, particularly in the field of cybersecurity.

Thus, much as Israel’s cybersecurity industry has long been fused to Israel’s military and intelligence apparati, the Paul Singer-funded and Israel-backed policy has openly sought to bring American companies and government agencies into the fold in order to prevent boycotts of Israel. Though the so-called “anti-BDS laws” that have been passed in several U.S. states are one facet of this push, the use of Israeli tech, namely cybersecurity, sector to pursue this same end has received decidedly less coverage.

The number of Unit 8200 alumni working in NYC’s tech sector has grown so much that they host an annual gala closed to the press where the goal, per Haaretz, is “to try to connect startups and early stage entrepreneurs from 8200 EISP (the Israeli accelerator for Unit 8200 alumni) with clients and venture capital funds in the United States.” One of the main players at that gala is Guy Franklin, the CEO of SOSA, which was chosen to run the other NYC cybersecurity sector.

The decision to create expensive, new cybersecurity centers run by JVP and SOSA, two Israeli firms with clear ties to controversial pro-Israel lobby organization and donors as well as Israel’s government and intelligence apparatus, reveals that not only is this Singer and Israel-backed policy continuing to develop and expand at a rapid pace, but now the money of New York City taxpayers is now being used to propel it to new heights even though that very policy benefits Israel’s economy at the U.S.’ expense.

Whitney Webb is a MintPress News journalist based in Chile. She has contributed to several independent media outlets including Global Research, EcoWatch, the Ron Paul Institute and 21st Century Wire, among others. She has made several radio and television appearances and is the 2019 winner of the Serena Shim Award for Uncompromised Integrity in Journalism.