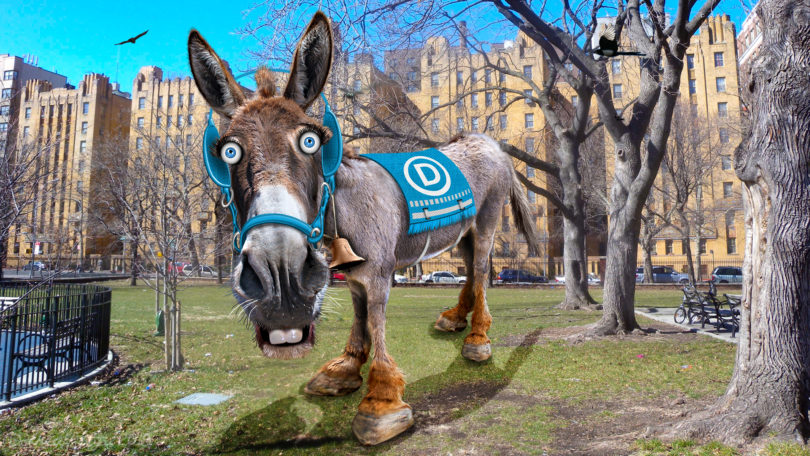 Would you trust the country in hands of what this party has become? Voters are asking.

We are watching the pathetic ending to one of the most pathetic periods in American politics. All the smoking guns have been firing blanks.

Following one of the most childish tantrums of denial ever recorded, Democrats set about destroying the Trump presidency in its crib; a WaPo from January 20, 2017 – Inauguration Day itself – exclaimed “The Campaign to Impeach President Trump has Begun.” The opening gambit was going to be Emoluments, including rent paid by the Industrial & Commercial Bank of China for its space in Trump Tower in New York.

After three years, it looks like that attempt finally reached its end game, failure, one gray afternoon. On Friday the Senate brought impeachment proceedings to their effective conclusion, declaring the witnesses already called before the House were to be the last. The formal vote to acquit Trump is scheduled as an anti-climax for Wednesday.

It has been ugly and mean. Using the entire apparatus of the American intelligence community, operating fully outside the law, Democrats declared the President of the United States a Russian spy. They forced gentlemen to explain to their elderly mothers what a pee tape was. We had to hear over dinner about Trump’s sexual peccadilloes and look deeper into Stormy Daniel’s cleavage than our own political souls. They made expedient heroes out of small, dishonest men like Michael Avenatti, John Brennan, and James Comey for perceived political gain.

Shame on you, Democrats.

When Russiagate collapsed they plunged deeper, with a setup “crime” driven by a faux whistleblower, supported by State Department gossips and not much more. Look at the series of plays attempted within this Hail Mary of a Hail Mary. Back in August the manufactured worry was that Trump — by messing with Ukrainian aid — was a threat to national security that would send the Red Army rolling west. Then there was the continued attempt to link up two created memes — Trump’s help from the Russians in 2016 and Trump’s help from the Ukrainians in 2020 as part of some whole to damage democracy. At the end it was to be about how not allowing additional witnesses chosen by leaks to the NYT would distort the 2020 election. One reporter called acquittal “the worst day for America since the Civil War.” We had to listen to another round of democracy dying, existential threats, end of the Republic, as repetitive as summer Top 40.

The House chose not to wait out a special prosecutor, or even subpoena witnesses back in the fall. The cries today about no witnesses in fact ignores how the House called 17 witnesses in their own impeachment, not a single oneof which had first-hand knowledge of the events unless we were willing to believe some State Department Obama fan-boy magically overheard both sides of a cell phone conversation. If they had a real case a special prosecutor could have sorted through Parnas and Hunter and Bolton, with subpoenas if necessary, and warrants could have shown us exactly what was said in those calls. But that would have come up weaker than Mueller and the Democrats knew it.

You don’t think voters see they were played — again? As with Brett Kavanaugh, when things seemed darkest, the Democrats produced a witness that appeared to turn everything around. Back then Christine Blasey Ford was the deus ex machina. Same with John Bolton and his “manuscript” (shall we call it a dossier?) and instead of dealing with it months ago in a calm fashion, The New York Times drops the leak right into the middle of the impeachment punch bowl so it could create its own sense of urgency saying we can’t wait for thoughtful deliberation or even a court ruling, we must do something right away.

So really, in the end this game-changer was supposed to be lifelong conservative John Bolton ratting out a Republican administration? That was how you were going to get Trump? Only a week earlier it was going to be Ukrainian grifter Lev Parnas. Before him was it “fixer” Michael Cohen, or Paul “Fredo” Manafort, who was going to flip? Was it taxes or the 25th Amendment which was once upon a time going to be the final blow?

Do you think voters won’t remember it was Adam Schiff who failed in Russiagate, issuing his infamous Schiff Memodefending as legal the FISA court surveillance of Carter Page now shown to be unconstitutional? The same Schiff who worked with the “whistleblower” to shape the impeachment narrative and then buried the whistleblower from scrutiny? History will remember Schiff poorly, and judge those who put their party’s future in his dirty hands, Nancy, equally poorly.

As it will Elizabeth Warren, who submitted a “question” at the impeachment proceedings which asked if the proceedings themselves “contribute to the loss of legitimacy of the chief justice, the Supreme Court, and the Constitution?” Nancy Pelosi picked up the theme saying the president will not be exonerated after the Senate acquits because “You cannot be acquitted if you don’t have a trial. And you don’t have a trial if you don’t have witnesses and documentation,” echoing the insanity of saying a victory in the Electoral College isn’t really being elected president. Do Democrats think the Super Bowl victory went to the team with the most yards rushing, or the one with the most points scored?

Impeachment failed in the Senate, ultimately, because it was phony. Senators are politicians, with their noses always in the wind. They sniffed not a modicum of support for this impeachment, and saw nothing akin to the evidence that would encourage them to return to their constituents and explain their contrary votes as they did confronted, overwhelmingly, with Nixon’s wrongdoings.

It’s really over now. Our democracy, which you regularly declare so in peril, will be forced to hold an election of all things to determine its next president.

Democrats, you led your supporters off a cliff. While you create false excuses for losing in 2016, they watched Republicans confirm judge after judge. As they listened in their sleep to you bark about diversity, they woke up to see mostly a handful of old, white men to lead the party into the election.

You lied to them repeatedly about Russia and Ukraine and what a danger Trump is. You continue to try to convince people a strong economy is an illusion and cheer on a recession. You continue to paint an inaccurate picture of a society with gun nuts, Nazis, and white supremacists on the march. You convinced a generation of young voters they are fundamentally unhappy, awash in racism, homophobia, and misogyny, and when they just can’t see it the way you do, you corrupted movies and TV with dorm room level political piety to insist that is how it is out there.

Now, instead of respecting one another at work and school, they tip-toe around as wanna-be defendants looking for targets to sue or complain to HR about. Describe yourself in one word? Offended.

Would you trust the nation to the people the Democratic party has become? Because that is the question Democrats have thrust into the minds of voters. As they have said many times, this was always more about America than it was about Trump.