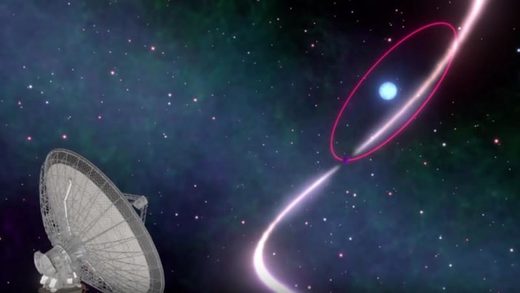 Astrophysicists spend their time working on some truly mind-bending stuff but after two decades of observations, scientists have witn

essed a pair of stars spinning so fast they literally bend both space and time.

The team has been tracking the orbit of the extraordinary binary star for about 20 years, using the CSIRO Parkes Observatory’s 64-metre radio telescope.

The researchers, from the ARC Centre of Excellence of Gravitational Wave Discovery, caught the spinning celestial bodies “frame-dragging” or, in other words, twisting both space and time with their immense gravity.

The research, published Friday in the journal Science, is yet more evidence for Einstein’s theory of general relativity.

The binary star is made up of two stars. One is a white dwarf, a star whose nuclear fuel has run out, which is roughly the size of the Earth but has 300,000 times its density. The other is a neutron star which is somehow about 100 billion times the density of the Earth while only measuring approximately 20 kilometers (12.5 miles) in diameter.

All that matter is compressed into a star system with the catchy name “PSR J1141-6545.”

We can witness frame-dragging to a tiny degree by observing gyroscopes here on Earth, however it takes an extremely long time, one degree every 100,000 years or so, but because the effect is around 100 million times as strong in the binary pair the scientists were able to spot it despite the fact that it is several hundred quadrillion kilometers away. In case you think that’s a made up number, a quadrillion is equal to a million billion.