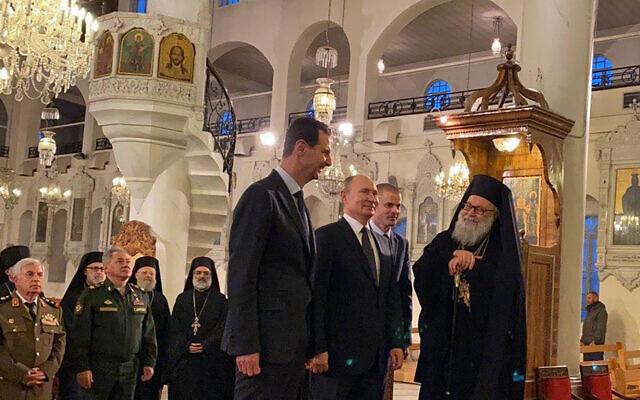 After a video aired on Russian television featuring dialogue between Assad and Putin during the latter’s visit to Damascus last week, The Hill reports of the now viral clip:

“In a video of the conversation between Assad and Putin at the Orthodox Church of the Virgin Mary in Damascus, Assad mentions the Apostle Paul’s conversion to Christianity after a vision at the gate of Damascus.”

The two leaders were standing alongside the Orthodox Christian Patriarch who presides over Syria’s some two million Christians in a famous cathedral on the ‘Street called Straight’ — reputed as  biblical site of Paul’s conversion mentioned in The Book of Acts — when Assad referenced the New Testament story.

Assad then in joking manner said that visiting the ancient biblical site would make Trump a better person, suggesting a Paul-like conversion experience:

“If Trump arrives along this road, he will become a good man.”

Putin jokes Assad should invite Trump to visit Damascus.
The leaders were referring to the Straight Street, which leads to Mariamite Cathedral of Damascus, & to Apostle Paul whose life was transformed after a vision he had as he walked on that road. pic.twitter.com/WfTy90RO9Q

The rare playful dialogue caught on film between the two leaders continued, with Putin responding: “He will change for the better… Invite him!”according to a translation of the interaction.

“I shall,” Assad said. Putin then affirms, “I’ll pass on the invitation!” — as the two continue laughing, with the bishop still smiling on.

Putin had actually made the high level trip unannounced on Russian Orthodox Christmas (Jan.7 every year, Julian calendar). He had attended a high level military briefing with Assad and the two countries’ defense ministers at a headquarters in the Syrian capital, and also toured parts of the city and historic sites and churches.

Putin and Assad visited the Marian Cathedral, the oldest Cathedral in Damascus which dates back to the beginning of Christianity pic.twitter.com/OV7uSMzX9G

Even though the invitation appears to have been offered in jest, it would be interesting if it actually did gain Trump’s attention.

Given it was published on state television Rossiya-1 this week, it’s clear the Kremlin possibly packaged it as some kind of message or to suggest that Putin and Assad are legitimately open to such a meeting.

Putin tells Assad to invite Trump for a visit:
"Invite him. He will come."https://t.co/5dRxuvku08

Putin’s visit to the Orthodox Christian cathedral in Damascus, seat of the Patriarch of Antioch, is infused with symbolism given Moscow has throughout the war in Syria seen itself as the ‘protector’ of the region’s sizable minority of Christians.

Syria’s Christian leaders in turn have not only stuck with the Assad government, fearing extermination under the ‘alternative’ of jihadist forces which sought to overthrow him, but have been on record as seeing Russian intervention as good thing.