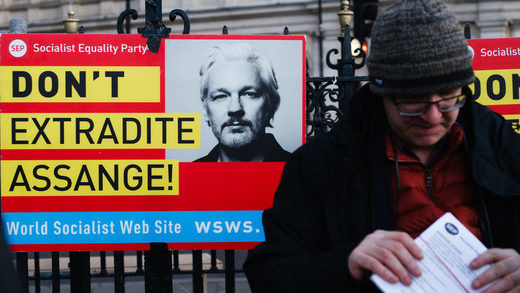 UN Special Rapporteur on Torture Nils Melzer has published a letter to the UK government, asking it to end the detention of Julian Assange, warning that his health may soon reach a “critical” stage, including risk of death.

The scathing letter, which was penned by Melzer on October 29, urged the British authorities to review the WikiLeaks founder’s prison conditions or release him immediately. However, having received no response from London in the last 60 days, Melzer decided to go public and publish the document in full on Tuesday.

In the letter, the UN special rapporteur described the detention regime that Assange has to endure in the clandestine top-security Belmarsh Prison as “unnecessary, disproportionate, and discriminatory.” He said it was designed to “perpetuate [Assange’s] exposure to psychological torture or other cruel, inhuman or degrading treatment or punishment.”

(2/6) My official findings, supported by medical experts, unquestionably provide “reasonable ground to believe” that UK officials contributed to #Assange’s psychological torture or ill-treatment, whether through perpetration, attempt, complicity or other forms of participation.

Melzer proceeded to admonish the British government for taking four months to respond to his previous letter of May 27, which was penned after Melzer visited Assange in the high-security facility on May 9.

Melzer wrote that a “thorough forensic and psychiatric examination” performed during his visit showed “a clear pattern of symptoms typical for persons having been exposed to psychological torture for a prolonged period of time.” But instead of heeding his recommendations, the UK turned a blind eye to the findings, preferring not to do anything to alleviate the journalist’s suffering.

Noting that his conclusions have been backed by medical experts, Melzer said they provide “reasonable ground to believe” that British officials “have contributed” to Assange’s torture or ill-treatment at the hands of the UK penitentiary system.

“I am very concerned that, if the UK does not take urgent remedial measures to alleviate Mr Assange’s situation, his health may soon reach a critical stage, including the risk of death”

The envoy noted that matters could go further south for Assange if the UK follows through with his extradition to the US, arguing that it “would expose him to a real risk of serious violations… including torture and other cruel, inhuman or degrading treatment or punishment.”

In face of what awaits Assange, who could get as many as 175 years behind bars in the US if found guilty of an array of espionage-related charges, Melzer “strongly recommended” that the UK government retract the authorization for his handover, and set him free “without further delay.”

If that is not viable, the second-best option one would be to change the current harsh prison conditions, allowing Assange to “regain his health and resume a normal social and professional life,” Melzer wrote.

Melzer also demanded that British authorities provide details of what steps the UK government has taken to protect Assange from torture and other abuse, and if no such measures were taken, to explain how this failure to react is “compatible with the human rights obligations” to which the UK subscribed under international law.

There have been mounting concerns over the rapidly deteriorating health of the WikiLeaks co-founder. Assange’s friend, journalist Vaughan Smith, told RT in a recent interview that the last time they spoke on Christmas Eve, Assange appeared sedated and mentioned that he was “slowly dying” in his cell.