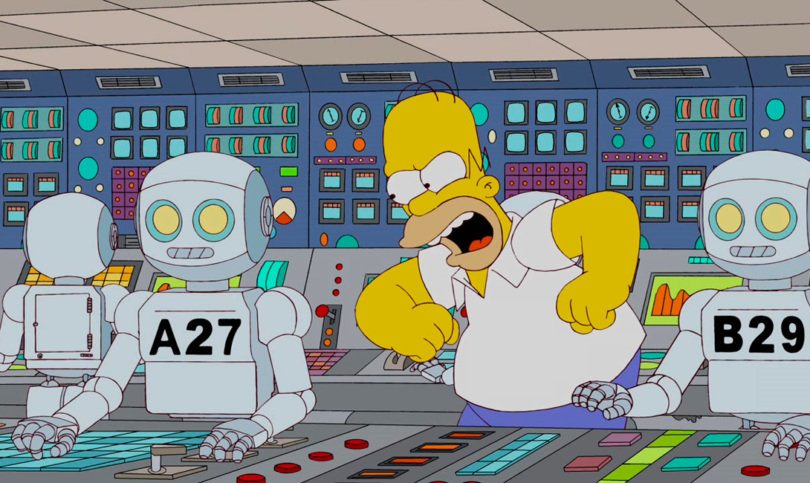 Many decades ago there was an issue of Mad comics that portrayed a future time when everything was done by robots and humans had no function.  One day the system failed. As it had been eons since humans had to do anything, no one knew how to fix the system.  It was Mad comics version of Armageddon.

I think that is where the digital revolution is taking us.  I remember when appliances and cars responded to humans, and now humans respond to them.  When I grew up cars and home appliances did not go “beep-beep” to remind you of the things you were supposed to do, such as turn off the car lights and take the keys out of the ignition, or turn off the oven and shut the fridge.

Cars, except for British sports cars, didn’t have seat belts.  Today a car doesn’t stop beeping until you fasten your seat belts.  I hear that soon the cars won’t start until the seat belts are fastened.

When the electric company’s outsourced crew failed to connect the neutral line to my house and blew out all appliances, sprinkler system, and garage openers, the electric company replaced everything on a prorated depreciated basis that cost me thousands of dollars.  The worst part of it is that the new appliances boss me around.

The old microwave would gently beep three times and stop.  The new one beeps in the most insistent way—open the door you dumb human right this second, immediately—and keeps on insisting until I obey.  The fridge refuses to let me leave it open for cleaning.  The oven insists that I open it immediately, despite my habit of cutting the on time short and leaving whatever it is to cook awhile longer in the hot oven.

Here is an explanation of how our electric meters spy on us and pass on the information to interested parties. https://www.paulcraigroberts.org/2020/01/15/the-digital-revolution-has-destroyed-privacy-and-made-everyone-insecure/

Self-driving cars seem to be our future, and robots are taking our jobs away even faster than global corporations offshored them to Asia.

What exactly is it that humans are going to be good for?  Nothing it seems.

Why will we need a driving license when cars drive themselves?  If there is an accident, who is to blame?  The company that made the car?  The company responsible for the software?  What is the point of car insurance when drivers have no responsibility?

Perhaps it is true that aliens are living among us.  Their language is “beep-beep” and they are using our machines and cars to train us, like Pavlov’s dogs, to respond to their command.

I can remember when telephones were a convenience before they became a nuisance.  When my land line rings, 95% of the time it is a scam or a telemarketing call, usually robotic.  Now, a man will listen to a sexy female voice, for a time, and a woman will listen to a courtly gentleman’s voice, but until sex doll robots catch on, no one wants to listen to a machine’s voice.  So why the calls?  Why do the telephone companies permit their customers to be scammed and their privacy to be constantly invaded?  How do the phone companies benefit from permitting unethical people to destroy the value of phone service?

The same thing, I am told, happens to cell phone users.  Recently I finally had to acquire a smart phone, because two people I need to reach only respond to text messages.  They refuse to answer any phone, and email is so invaded by scammers, malware, and marketeers that they do not use email.  They do not even set up the message system on their cell phones. If you try to call them, you get instead of an answer the message that the person you are attempting to call has not set up their message box.

So there you have it.  Except for texting, which can’t (yet) be done with a land line, telephones are a nuisance.

Growing up in Atlanta during the 1940s and into the early 1950s, you could not yourself place a call from your telephone.  When you picked up the receiver, an AT&T operator answered and asked: “number please.”  You gave her the number, and she rang it and connected you if there was an answer.  If you did not know the number, you asked her for information.  If you knew the complete name and perhaps the street address, you were provided with the telephone number.

In those halcyon days even in a city such as Atlanta, Georgia, there were party lines.  That meant that you shared a telephone line with a neighbor.  If you picked up the receiver to make a call through the operator and heard voices speaking, you knew the line was in use and decency required that you hang up immediately.  As the talking parties heard the click when you picked up the line, if they didn’t hear the click when you hung up they asked you to get off their call.

In that system, there was no anonymity. Anonymity appeared with dial phones, which allowed you to make your own calls.  From a public telephone, the call was not traceable to you.  This technology was the beginning of our downfall.

Dial phones, something youths have seen only in antique shops or old movies are still with us in everyday language. We still say “dial the number” when we are punching buttons.

Today thanks to technological “progress,” it is much easier to invade privacy.

Technology is destroying us and the planet.  The pollution from technology is phenomenal. 5G itself may do us in. The destruction of privacy, identity, and freedom by the digital revolution is far beyond George Orwell’s imagination.  Insouciant humans delight in the gadgets that are turning themselves into unfree people who are under control but who themselves control nothing.

This outcome is easily seen in China where the government uses universal spying to construct for each person a social credit score.  If that person is a dissident, has bad habits, etc., that person gets a score too low to qualify for a loan, university admission, employment, etc., and becomes a non-being.  Here is Soren Korsgaard’s explanation of our future. https://www.paulcraigroberts.org/2020/01/15/a-digital-prison-is-being-created-for-humanity-and-it-is-close-at-hand/