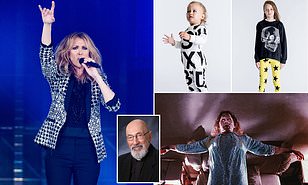 How can Nununu claim to be promoting “gender neutral” clothing for children, while at the same time their clothing items are divided between “boy” and “girl” on their web site?
by L.C. Vincent
(henrymakow.com)
There is nothing more innocent and vulnerable than a newborn baby.
So is it any wonder that the illuminati would use a cultural icon as the stalking horse for the mental and spiritual re-programming of our children? The promotional video for Celine Dion’s new line of children’s clothes(Celinununu) is full of dark subliminal messages.
We first see Celine riding in the back of a limousine while her voice over solemnly intones: “Our children… they are really NOT our children…”. Then exactly whose children are they, one wonders? We shall soon discover that another, outside force has ominous plans for them. 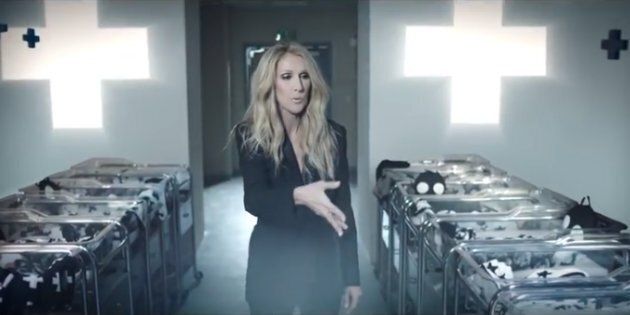 We next see Celine enter a hospital maternity ward, her silver evening gown now changed to black. She is carrying a black bag with a large white cross that resembles a plus sign. All of the male babies are dressed in blue, on the blue side of the aisle; and the female babies are on the pink side, dressed In pink. The standard gender bathroom symbols for male and female are on the walls of each side.
Celine reaches into her black bag and removes a box that also has a large, white cross on it. She opens the box and takes out what appear to be black diamond flakes which she blows over the children, as if casting a spell. Instantly, several flashes occur and then we see the same black and white crosses on the walls, and suspended from the ceiling. The infants’ clothes have also changed, from pink and blue to black and white. Disturbingly, (if one slows the video) we also see that large stuffed black dogs and voodoo dolls with huge, white eyes are now occupying the cribs along with the infants. 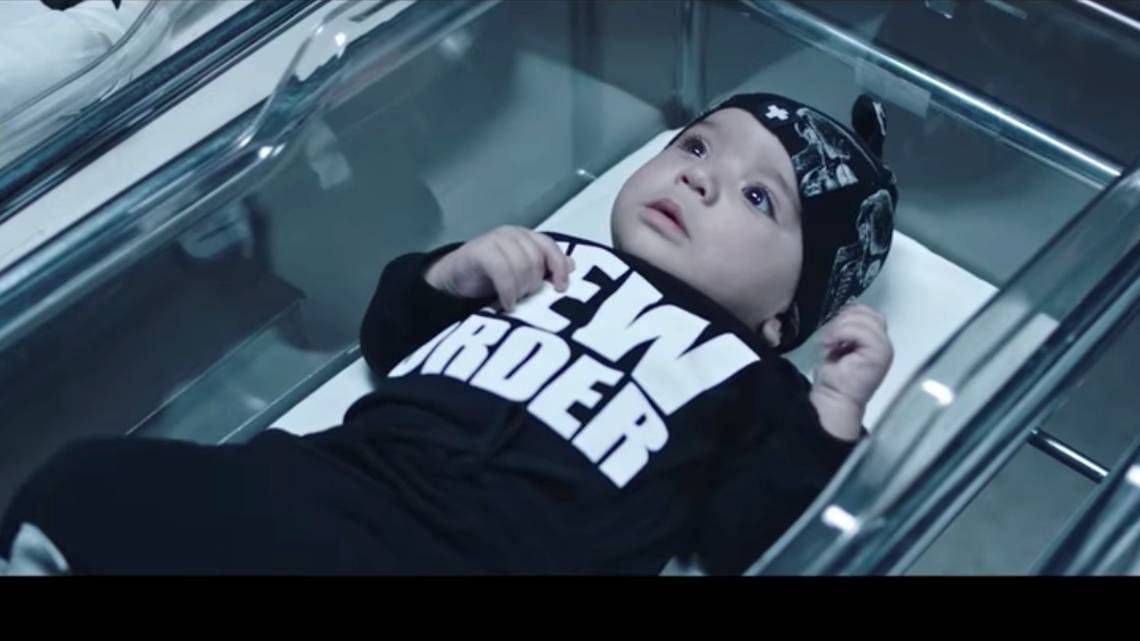 The first baby we see is now wearing a solid black jumper with the words “NEW ORDER” in large white block letters. Celine smiles approvingly before she is tackled by security guards as she looks into the camera and says twice: “It’s OK, it’s OK…. I’m Celine Dion…”.
Exactly what are we to make of all this? If one accepts the superficial explanation of Celine and her handlers, we are told that Celine has always been interested in fashion and she is simply bringing new style to children’s clothing, while also popularizing the idea that infants do not have to be “molded” as male or female from birth; rather, they should be free to “choose” their sexual identity, as if they really could choose to be the opposite sex, or even genderless.
BELIEVE WHAT WE SAY, NOT WHAT YOU SEE
When several Christian observers warned that they saw a not-so-subtle push in the direction of a gender-fluid Satanic society, they were ridiculed for being parochial, “old-school” socially repressive Puritans. The “New Order” script emblazoned on some of the clothes simply was a suggestion for children to think new thoughts and achieve new dreams. Nothing mystical or magical, or occult. That’s just a “conspiracy theory.”
But even a cursory examination of the fashion line’s Instagram account reveals the truth of the matter. After doing so, only a truly naive simpleton would not wonder exactly why Celine Dion was promoting Satanism to the children of our world.
The images found at celinununu on Instagram expose young, impressionable minds to language, symbols, patterns and thoughts connected with Satan and The Dark Side, and lead them away from God into a “New World Order” controlled and shepherded by the Illuminati.
This IS the Illuminati’s effort to possess our children at the earliest moment of vulnerability to bring about the creation of their “New WORLD Order” thru the mental re-programming of an entire new generation in service to Satan.
As anyone who truly understands this world already knows, the most critical information is transmitted to mass consciousness via symbolism. Occult information and occult propaganda (for that is exactly what this clothing line represents) is transmitted via symbols to the subconscious mind of both the viewer and the wearer of this clothing line. Make no mistake about the creators of this clothing — it was all done with a very distinct, occult purpose–to program not only the children wearing these clothes, but to program their parents as well!
The most repetitive symbol seen throughout the video are the white and black “plus” signs, which some would call crosses. But they really are not religious crosses — they are “plus signs.” Now rotate those “plus” signs 45 degrees, and those “plus” signs become X’s!
It would seem quite logical that they actually represent X chromosomes — the chromosomes that determine sexual identity. Once the transformation in the nursery appears, all we see are black or white crosses — which are actually Xs. Those double X chromosomes are the determinant for the female gender, making the female gender the dominant gene throughout our New WORLD order. Indeed, the very word used to define the new Celine Dion clothes line is a sexual referent. The Urban Dictionary states that, “nununu” refers to sexual private parts of both sexes.
ISRAELI CONNECTION
It should come as no surprise that these new baby and young child designer threads are the product of an Israeli company whose two designers are Jewish Israeli citizens — Tali Milchberg and Iris Adler. According to their press releases, Adler and Milchberg have created “edgy” new designer label “must haves” that the Hollywood elite now covet, and have flocked to dress their children in these daring fashions so that they would be au courant.
When this fashion line was launched in November of 2018, the publication “National Catholic Register” featured an article about this new clothing line for children, stating that Celine Dion had unleashed “….a new demonic force into the world.” This is based on:
– a child’s face embraced by skeleton hands, with one eye visible 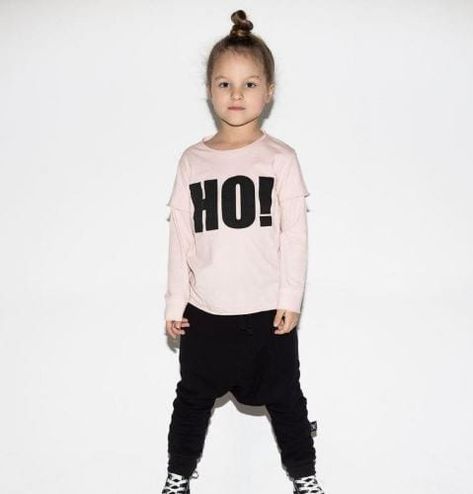 – a young 5 year old girl wearing a T-shirt with “HO!” printed in huge black letters;
– two small little girls standing under a neon sign that says: “Let’s Get Physical”;
– a young girl approximately 6 years old wearing a loose sweatshirt emblazoned with eyes, while her hand sports the All Seeing Eye of The Illuminati; – an approximately 3 year old girl with antlers coming out of her head;
– a baby wearing black stars and a black skull cap with two large devil horns;
– children wearing black and white animal masks;
– and just to make sure you really get the message, a young child wearing a goat’s head holding open a book of magic spells clutched to their chest.
There are also multiple images often associated with Project Monarch mind control victims found at the same Instagram account — faceless humans, dark mirrors, masks that hide identities from the Self — all of these images are a direct link to mind control processes and triggers.
Yet whether Celine Dion is an unwitting tool or a conscious conspirator in all this, there is no doubt that Tali Milchberg and Iris Adler, left, the two creators of this fashion line for children aged 0 to14, (and by extension, their parents), are heavily involved in promoting the program of the Illuminati for the rest of humanity.
As their web site states: “Fashion has the power to shape people’s minds, inspire their desires to be free and to find their own individuality thru clothes.” So apparently Nununu is telling babies and their parents that it is OK to go thru life leading a gender neutral lifestyle in service to Satan.
While piously proclaiming that their clothing line “liberates children” and “…frees them from the “role” of a boy or a girl…” it seems obvious that the true intent of this rag house is to promote gender confusion at the earliest age, coupled with cultivating a macabre interest in death, the dark side and black magic.
Of course, Adler and Milchberg protest this line of reasoning, insisting that they are just “…trying to stop sexualizing kids….”. Really? And they do that by creating a pink T-shirt for little girls emblazoned in huge black letters with the word “HO!” on it?
How can Nununu claim to be promoting “gender neutral” clothing for children, while at the same time their clothing items are divided between “boy” and “girl” on their web site?
It seems clear that Celinununu’s true intent is to subconsciously program the children of the rich and famous, the media “elite” and those who “aspire” to take the path of the cabal for One World Government. To fulfill that evil agenda, they are leading everyone — government, military, media and parents — to focus on death, the Black Arts, and the blinding light of Lucifer’s dark message.
—–
LCVincent copyright 2020, all rights reserved