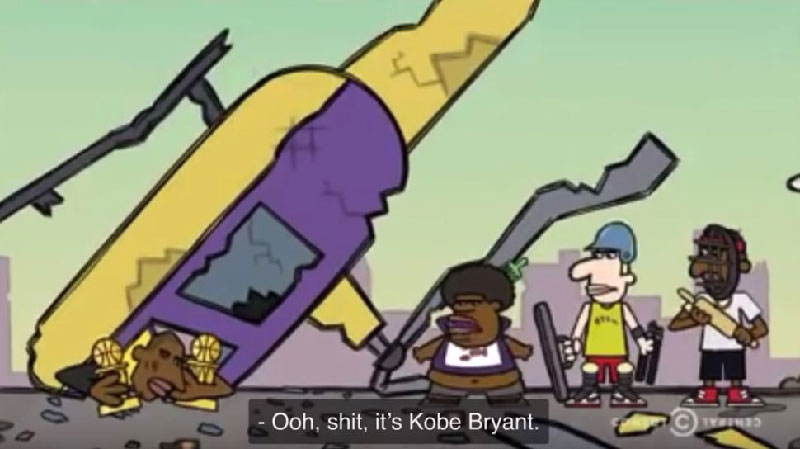 A look at the many “coincidences” and eerie predictions surrounding the untimely death of Kobe Bryant at the age of 41.

Kobe was one of those athletes that transcended the boundaries of their sport to become pop culture icons. More than a basketball superstar, Kobe was a household name – the type that was known throughout the world on a first-name basis. He was the personification of success and greatness. On the basketball court, he won everything that was possible to win and he was in the process of passing on this legacy to his four daughters. Off the court, he cashed in on some of the most lucrative endorsement deals in sports history and he was at the head of a massive business empire. Oh, and he also won an Oscar. And, when major pitfalls came on his path (i.e. rape allegations in 2003), he managed to bounce back like the basketball he used to dribble. In short, it seemed like nothing could stop Kobe from flying high … until it all came crashing down.

For these reasons, the sudden and unexpected death of Kobe Bryant at the young age of 41 was received with complete shock and disbelief. It was one of those events that immediately send shockwaves around the world. But that shockwave was most strongly felt at the epicenter of it all: Los Angeles.

A few hours later, the Staples Center – the arena where Kobe made history – turned into a makeshift memorial for the deceased athlete. The same night, a major media event took place at this exact location: The 2020 Grammy Awards.

This is one of many bizarre coincidences surrounding the death of Kobe Bryant. And there are many more.

Synchronicity is defined as “the simultaneous occurrence of events which appear significantly related but have no discernible causal connection”. Carl Jung described these events as “meaningful coincidences”. He also believed that they happened for a reason.

The least one can say is that Kobe’s death is surrounded by some eerie synchronicity. Or was it all planned?

One thing is for sure, there’s an eerie connection between Kobe and helicopter crashes. It’s unreal. Here are some examples.

In 2011, Kobe starred in a major, star-studded advertisement to promote his Nike shoes and his new alter-ego: Black Mamba. Spanning nearly 6 minutes, the ad ended with Kobe fighting a “final boss” (played by Kanye West), who flees in a helicopter. What follows is now … eerie.

In 2017, Kobe was featured in the adult cartoon show Chamberlain Heights… and he literally dies in a helicopter crash.

When do coincidences become “meaningful coincidences”? Difficult to say. However, the fact that Kobe’s death was closely intertwined with the 2020 Grammy Awards adds another layer of strangeness.

Kobe and the Grammys

To fully understand the synchronicity at play here, I need to go back to 2012. On February 11th, 2012, Whitney Houston – a major icon in the music industry – was found dead at the Beverly Hilton in Los Angeles. At the same exact location, a few floors below, a pre-Grammy award party was taking place with over 800 guests. The next day, the 2012 Grammy Awards took place and the entire event was tainted with Houston’s death. As explained in my article Whitney Houston and the 2012 Grammy Awards Mega-Ritual, the ceremony was creepy and strange – complete with some satanic undertones. It also put forth Whitney’s “replacement” – Jennifer Hudson.

Oddly enough, Kobe’s death followed the same exact pattern. A few hours before the 2020 Grammy Awards, Kobe Bryant died in a helicopter crash in Calabasas, California – about 30 miles from the Staples Center, where the Grammy Awards took place.

Coincidentally enough, it is at this very same Staples Center that Kobe played hundreds of times as part of the Los Angeles Lakers. Alicia Keys, the host of the 2020 Grammy Awards, even called the arena “the house that Kobe built”.

The same night, at the same location, the 2020 Grammy Awards took place. The entire event was heavily tainted by Kobe’s death.

Coincidentally enough, Lebron wrote on his shoes a tribute on the day of that game:

Therefore, after the crowning of “King James”, Kobe passed away near the Staples Center, where he ruled for years. It is at this same Staples Center that the 2020 Grammy Awards turned into an elite-industry-catered ceremony for Kobe. Since 2009, I’ve been stating that these award shows are actually mega-rituals that emanate powerful energy. The 2020 Grammy Awards were a prime example of this fact.

The sudden death of Kobe Bryant is reminiscent of the sudden deaths of other icons such as Michael Jackson and Whitney Houston. Since these figures were omnipresent in mass media, they were, in some odd way, a part of people’s lives. Therefore, news of their deaths inevitably creates a shockwave of shock and grief around the world. And that shock and grief was palpable at the 2020 Grammy Awards – the same way it was palpable at the 2012 Grammys, following the death of Whitney Houston.

While death can strike anyone, at any time and that accidents definitely happen on a daily basis, the cases of Whitney and Kobe are surrounded by plenty of eerie facts. While they can all be dismissed as mere coincidences, Carl Jung believed that, sometimes, coincidences are so meaningful that the universe is, somehow, trying to tell us something. Like, maybe, that there were dark forces at play in Kobe’s death.

P.S. If you appreciated this article, please consider showing your support through a small monthly donation on Patreon. If you prefer, you can also make a one-time donation here.